From the much-loved .35 Rem and Whelen to the now-obscure .358 Win, these five .35-caliber cartridges are on their way out, or already as good as gone. 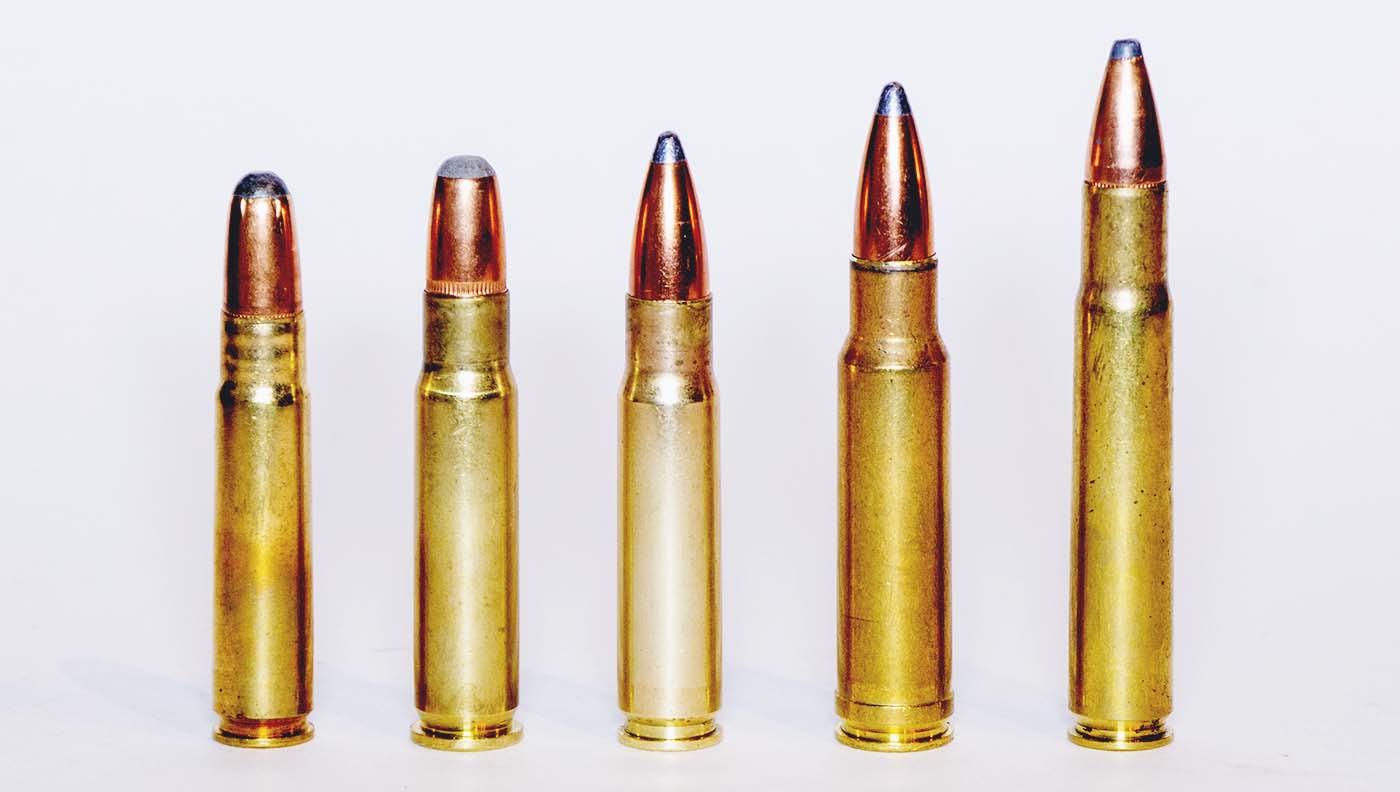 There’s a specific reason why we’ve seen a number of great .35-caliber cartridges over the years. It’s because it wasn’t all that long ago that bullet performance wasn’t nearly so good as it is today. So, hunters who wanted more penetration and thump turned to .35-caliber versions of their favorite .30-caliber hunting rifles. Now, the .35-caliber big-game cartridge appears to be on its way out the door, for a related reason: With today’s excellent bullets, most hunters just don’t need a .35.

There are hold outs who cling to their favorite .35 like a preacher hugs his bible, and I’m one of them. But, except for one of the most underpowered .35s of all time—the 350 Legend—those that were once so cherished by experienced hunters are nearing extinction. Here are five great .35s that are sadly slipping into obscurity, or are already there.

Though generally thought of as a cartridge for lever guns, the .35 Remington was originally designed and introduced for Remington’s Model 8 semi-auto rifle. Unlike most traditional lever-gun cartridges, the .35 Remington does not have a rim larger than the cartridge’s base. It gained its fame chambered in the Marlin 336 and used by hardcore Northeastern hunters who walked up bucks and shot them from their feet. Standard .35 Remington loads will push a 200-grain bullet to about 2000 fps, generating 1776 foot-pounds of energy. But the “Heavy” .35 Remington load from Buffalo Bore will push a 220-grian bullet to 2200 fps generating 2364 foot-pounds. Ain’t no .30/30 ever coming close to that. And for the reason, I’ll always own a .35 Remington.

Not yet. There are still enough lever guns chambered in .35 Rem in use to keep it kicking. But this cartridge will never be as popular as it once was.

This cartridge is simply a .308 Winchester necked up to accept a .358-caliber bullet. Winchester’s update to their older and much-loved .348 Winchester, it is a short-action cartridge that’s more powerful than the .35 Remington. It’s probably best known in Winchester’s modernized lever-action Model 88, and their semi-automatic Model 100, both of which have been discontinued. Browning also chambered it in their BLR lever-action and there were a few early Ruger 77s chambered in .358 Winchester. Pushing a 250-grain bullet to 2200 fps, it could generate 2686 foot-pounds of energy, but with the introduction of the .338 Federal, which is also a necked up .308 Winchester cartridge, the .358 Winchester is now nearly forgotten. I killed my first black bear while hunting in Montana with a .358 Winchester.

Yes, this .35 has run its course. Though because of its one-time popularity, factory ammo should still be available for some time.

The .350 Rem Mag and its sister cartridge, the 6.5 Rem Mag, were the original short-magnum cartridges. Offered in the lightweight Remington Model 600, the .350 produced eye-watering recoil, but it became a favorite in Alaska for those who wanted a lightweight, powerful rifle. Gun writer and Gunsite Academy founder Jeff Cooper adored the cartridge and used a custom scout rifle chambered for it to take his lion. However, a decade after its introduction, it was already beginning to disappear. Remington tried to revive it in 2002 by chambering it in their gaudy Model 673 Guide Gun, but it was a failure. There’s nothing wrong with this cartridge. It’ll launch a 225-grain bullet at 2550 fps and generate 3248 foot-pounds of energy, making it suitable for anything in North America. I’ve wanted one for as long as I can remember.

For sure. If you have one and like it, learn how to reload for it. Otherwise you won’t shoot it.

Though many think that this a wildcat cartridge, developed in 1922, was conceived by the great gun writer and outdoorsman Townsend Whelen, it was actually created by gun writer James V. Howe. With permission from Whelen, Howe named the cartridge after him. It is nothing more than a .30/06 Springfield case necked up to accept a .358-caliber bullet. As unmagical as that might sound, it’s one of the hardest hitting non-magnum cartridges ever. The Hornady Superformance load for the .35 Whelen launches a 200-grain bullet at a blistering 2900 fps, with 3760 foot-pounds of energy. With the right bullet, the Whelen will handle anything in North America and maybe anywhere else. In 1988 Remington legitimized the .35 Whelen and while it has a cult-like following, it never reached mass acceptance. In 2013 I took my first kudu bull with a .35 Whelen. I later sold that rifle to my best friend who moved to Alaska. He used it to stop a charging Kodiak bear.

Although the Whelen has seen a resurgence in single-shot rifles in some states with curious deer hunting regulations, going forward it will be remembered way more than it will be used.

To boost the sales of their Model 94 lever-action rifle, Winchester introduced the .307 and .356 Winchester in 1982. Both were based on a .308 Winchester case, with the addition of a rim the same size as that of a .30/30 Winchester to feed and function in Winchester’s legacy lever gun. The .356 Winchester is a rimmed version of the .358 Winchester, only giving up about 50 to 100 fps. No one cared. In less than a decade it was done. I almost bought a .356 the year it came out but ultimately opted for the .307. Of all the .35s, the 356 is the one least likely to ever see light again. Henry currently offers a .35 Remington, and on occasion you’ll see a new rifle chambered for the Whelen, but it’s highly unlikely you’ll ever see a new .358 Winchester.

Yeah, almost from the day it was introduced. If you have one and like it, buy every box of ammo you see, it could disappear at any moment.