Gun History: Everything You Need to Know About How Rimfire Ammo Works is in the Story of the .22 Short

In this excerpt from his new book on .22 rifles, the author tells the tale of an iconic round 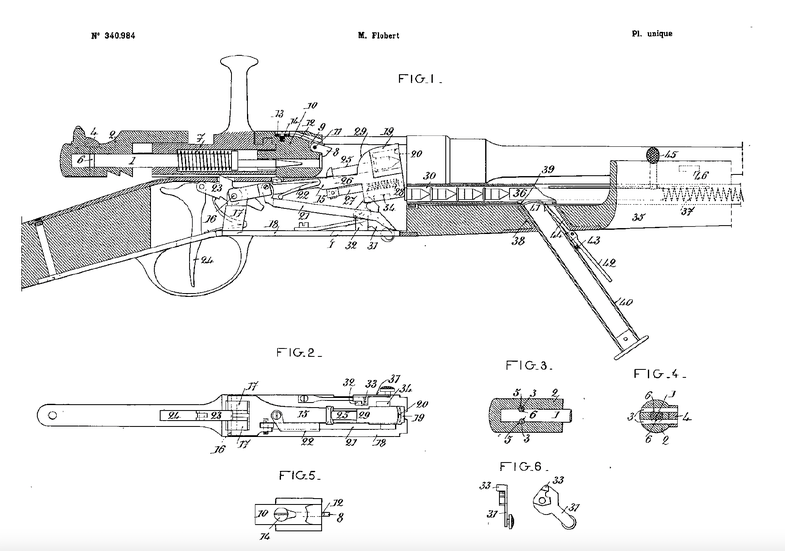 This 1904 patent by Flobert demonstrates the giant mechanical leaps it quickly made. Note the magazine, turn bolt, tube magazine, and firing pin and mainspring within the bolt. Courtesy of the author
SHARE

This story is an excerpt from Rimfire Revolution: A Complete Guide to Modern .22 Rifles by F&S contributor Michael R. Shea.

Throughout the 1800s, firearm development was cartridge development. Engineers, inventors, gunsmiths, and crackpots tried various ways to speed reloads by integrating fulminate primer, powder, and bullet into a single package—then they built guns around their idea.

In 1808, the Swiss gunsmith Jean Samuel Pauly developed a self-contained paper cartridge with primer snugged behind the bullet. His gun was loaded from the breech end, much like a modern break-action shotgun. When the trigger was pulled, a needle struck through the paper and detonated the primer. Frenchman Casimir Lefaucheux took this idea and replaced the paper for brass to develop the pinfire cartridge. Each round had its own firing pin that jutted off the cartridge’s side at a 90-degree angle. Trip the trigger on an early pinfire, and the hammer dropped, striking the integrated pin, detonating the primer. Then around 1845, another Frenchman, Louis-Nicolas Flobert, created the first modern firearm cartridge.

The Parisian Flobert took a simple copper cup, loaded it with fulminate primer compound, and topped it with a round ball. This was essentially a bullet crimped to a percussion cap. There was no real rim or flange at a 90-degree angle in his first designs. The case head had a taper that wedged the cartridge in the chamber. There was no powder in the case, only the primer and the lead ball. Flobert’s rifles and revolvers were designed for indoor parlor shooting or whacking a troublesome rodent in the pantry. They were gallery guns, designed to punch paper or tip over little tin animals at a few steps, much like gallery shooting games prevalent at American carnivals and country fairs until recent times. The early Flobert designs had heavy hammers that crushed the primer-side of the self-contained metallic cartridge. In later versions, a firing pin was added to the action.

Read Next: 12 of the Best .22 LR Ammo Choices for Hunting and Competition

At the London Exposition of 1851, Flobert exhibited his small .22-caliber rifle. Attending were two Americans, Horace Smith and Daniel Wesson. They were impressed and, by 1857, they had developed a new cartridge of similar design—the .22 Short for the new Smith & Wesson Model 1 revolver. They patented the cartridge on April 17, 1860, as the S&W .22 Rim Fire.

This new metallic cartridge had a straight case and hollow rim—a first in the United States. The hollow rim allowed Smith & Wesson to use a wet priming mixture, spun to the rim’s edge, and dried. Powder could then be added to the case without it mixing with powdered primer—a problem that led to constant misfires in the duos other post-London designs. Smith & Wesson loaded their first .22s with four grains of very fine black powder. The powder sat atop a perforated-paper wad to further restrict the dried primer from mixing with the powder. (Later, as they perfected the wet-primer process, the paper disc was dropped.) The head of the case was convex or dished out, not flat like modern rimfire ammo. There was no head stamp. Smith & Wesson thought the dished head helped more evenly distribute primer around the rim. Pull the trigger, and a firing pin stabbed the brass case’s rim, igniting the primer.

Like today, the first .22 Shorts were loaded with a 29-grain lead round nose. The bullet had a tapered heel that reduced the backside of the bullet’s diameter so it would fit in the case. This was referred to as a “heeled” or “outside lubricated” design because wax or grease needed to prevent lead buildup in the bore was applied to the bullet outside the case. (All .22 rimfire bullets are still heeled and outside lubricated except for the .22 Winchester Magnum Rimfire.) Smith & Wesson’s 1860 patent shows three lubrication grooves or cannelure along the diameter of the bullet. The cartridge case had a light crimp on the bottommost cannelure to secure the bullet in place. With this design, the diameter of the brass case matched the outside caliber diameter of the bullet. The bullet base was convex or dished as if a BB were pressed into the lead—a likely design holdover from the caseless Volcanic and Rocket Ball cartridges that were cutting-edge in their day. Modern bullet and cartridge designs have abandoned most of these principles, but you could never call these features unsuccessful. The .22 rimfires are still the most widely produced arms and ammo in the world. The antique .22 Short remained an Olympian as the official round for international rapid-fire pistol competition until 2004 when it was replaced by .22LR.

While underpowered by today’s standards, the Model 1 in .22 Short became a popular compact self-defense revolver with soldiers on both sides of the Civil War. Smith & Wesson’s first pistol and cartridge were a major early financial success, too, thanks mainly to the rimfire manufacturing process they developed. Like copper and copper-alloys like brass, soft metal could be rolled into thin sheet metal, then punched into small discs. These discs were then “drawn” into little tubes with one end closed. A rim was “bumped” into the head much how a hand loader uses a re-sizing die to shape centerfire brass. The malleable metal didn’t tear or split through the forming process. Hundreds of these little cups could be drawn and bumped in a single pass of a 19th Century machine press. This made ammunition for the Model 1 widely available and affordable. Several U.S. manufacturers started producing the easy-to-make “.22 Rim Fire.” Overseas, Eley of England produced it as the .230 Rimfire. By 1871, annual round production hit 30 million.

Flobert’s cartridge developed more of a rim and became known as the .22 BB Cap. The BB stands for “bullet breech,” a reference to the breech-end loading in Flobert rifles and pistols. (Later came the .22 CB for Conical Bullet.) When multiple variations on the Smith & Wesson’s cartridge appeared in the 1870s, including the .22 Long in 1871, they renamed it .22 Short.

The hollow rim and wet-priming process pioneered by Smith & Wesson did several things very well. First, the rim of a rimfire held the cartridge securely in the breech face. A closed action effectively clamped the round in place. (Many of the early Flobert actions didn’t even lock. A stout mainspring held tight enough.) Second, the ammunition was relatively weather-sealed with the bullet pressed in place surrounded by a copper case—a dramatic improvement over loose powder and paper cartridges. Third, the mailable copper case created a seal at the breech end and further expanded to the chamber on detonation, so all the toxic fulminate gases and black powder smoke went down the barrel and away from the shooter’s face. Fourth, the rim provided an excellent gripping surface for reliable extraction and ejection. Extraction and ejection issues plagued early needle-fires and pinfires. Fifth, the rim provided an effective way to measure and build proper headspace into bolts and barrels, which helped make the round accurate. Headspace is the distance between the bolt face and the part of the chamber that prevents the case from moving forward. With a rimfire, the headspace is taken up by the thickness of the rim, which is sandwiched between the bolt face and the breech.

For all these reasons and more, patent offices in the U.S. and Europe were flooded with rimfire designs between the 1860s and 1890s—many new but inconsequential .22s were developed, but most were much larger.

In 1860, B. Tyler Henry patented a rimfire repeater with a cartridge called the .44 Henry Flat. By 1865, repeating carbines utilizing .56- and .58-caliber rimfire cartridges like the Sharps and the Spencer outmatched all muzzle-loading small arms on the battlefield and helped the North win the Civil War. The US Army reportedly resisted the Spencer Rifle, chambered in .56-56 Spencer, but after President Abraham Lincoln shot a Spencer himself in 1863, he insisted a large order get placed. After the war, the Winchester 1866 “yellow boy” in .44 rimfire went on to win the West—and the imaginations of shooters everywhere. By 1880, a catalog for Union Metallic Cartridge Company listed 40 rimfire cartridges for sale. Only two were .22s. More than half the list ranged between the Colt .41 and .58 Joslyn.

Rimmed big-bore cartridges dominated small arms until the advent of smokeless powder required cartridges capable of handling high pressures. Early smokeless powders, like the French Poudre B, proved three times more potent than black powder by weight and produced much less smoke. Rimfire cases by design straddled the pressure curve from the very beginning. The brass case had to be soft enough for a firing pin to depress the rim and ignite the primer and strong enough to not blowout the case head or split the case in the chamber. In small doses, smokeless worked well in rimfire cartridges, but the brass of big-bores like the .44 Henry that pushed a 200-grain bullet with 28 grains of black powder could not handle the equivalent weight of smokeless or semi-smokeless. One of the largest rimfires ever developed, the .58 Miller, sent a 500-grain bullet downrange pushed by 60 grains of black powder. Smokeless powder had much different pressure demands and quickly ushered the development of centerfire priming and beefed-up case heads.

Around 1887, .22 Shorts hit the market loaded with semi-smokeless and smokeless powder. This development brought together all the features of modern rimfire ammunition into a single package—all of which persist today. The brass case had a hollow rim spun full of wet primer. The heeled, outside lubricated, lead bullet matched the diameter of the case. The self-contained little pill was loaded with smokeless powder. Many iterations of these features would come and go, but none would take over like the world-famous .22 Long Rifle—by far the most widely produced small arms cartridge world has ever seen.