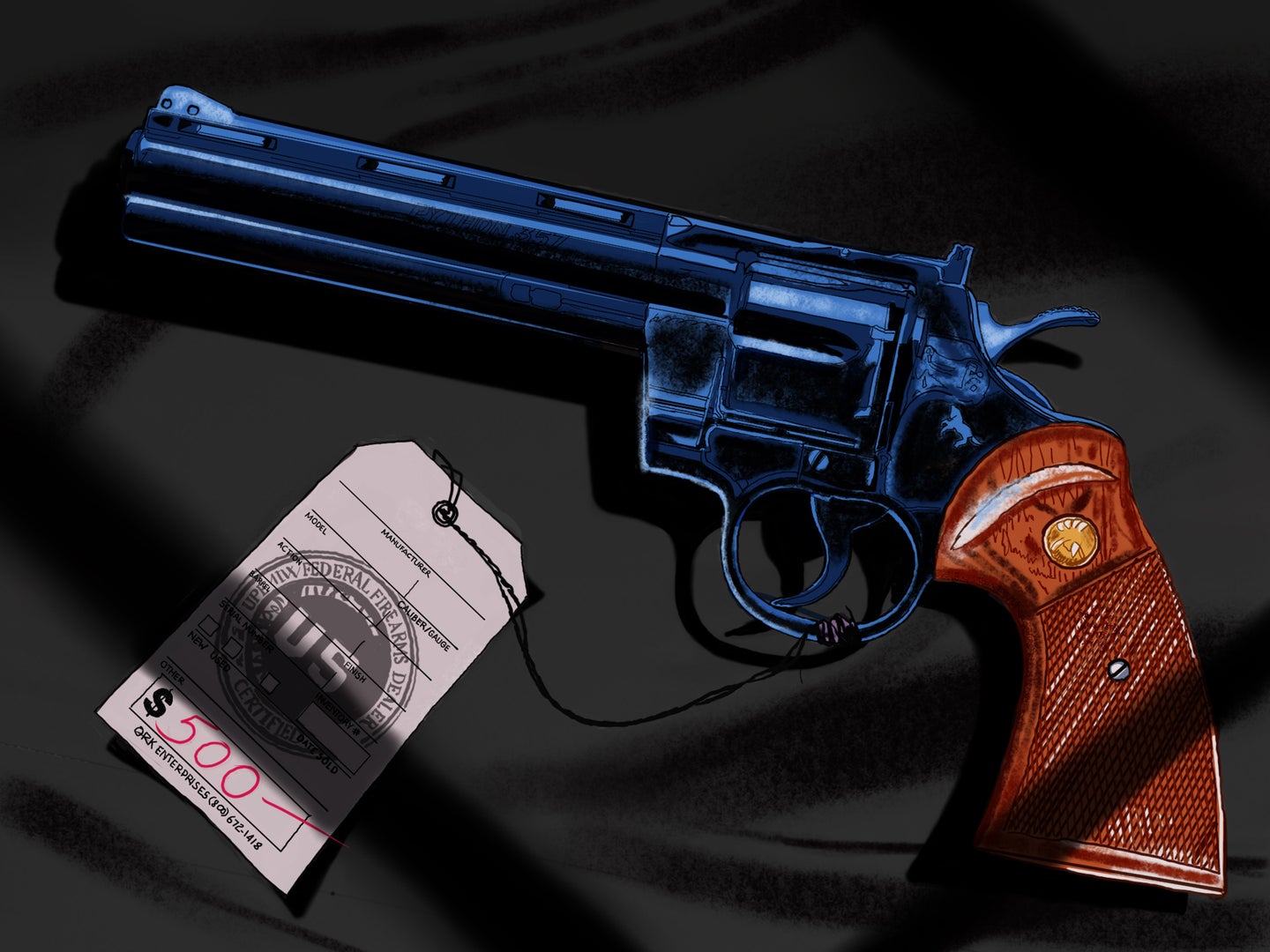 The author bought a mint Colt Python for just $500 years ago—but then sold it. Illustration by Jeffrey Smith

The Guns That Got Away

THIS STORY is about guns I sold for one reason or another and have regretted selling ever since. I confess that I did a similar piece for Gun Digest in the early 1980s, except instead of writing about my own guns, I wrote about firearms that my gun-writing colleagues had sold.

Back then we used telephones, and my first call went to John Wootters, asking if he’d ever let one go that he wished he had kept. There was a long, long, silence, and then John said, “Have you got the rest of the day?”

The rifle that John regretted selling most of all was a Winchester Model 88 lever-action .308 that he called Jumper, because when it was time to shoot, it seemed to jump onto the target. He got Jumper in 1953 when he got back from Korea and traded it in 1962 for a Remington 700 in 7mm Remington Magnum. Jumper was the best deer rifle he ever owned, and he looked for it until he passed on in 2013.

This time, I’ll write about my own lapses of judgment.

This was a 1960s-vintage Python with blued steel and a 6-inch barrel. It was mint; I doubt if the owner had fired it more than a few times. I think I paid $500 for it in 1992, and I used it for only one thing: shooting standard NRA bull’s-eye matches at 50 yards. I fed it Federal .38 wadcutters, and it performed like a champ. The Python came all original, but I had the factory iron sights replaced with something more visible, and the factory grips went in favor of Hogue grips. I proceeded to lose the original sights and grips as well as the factory box over the years, which, for a gun like this, rates about a 10.5 on a Stupid Scale of 1 to 10.

Everything you’ve heard about old Pythons is true. They were, for the most part, handmade and exquisite firearms, built to a standard equaled only by old Smith & Wesson Model 29s and Triple Locks. The bluing was Colt Royal Blue. The action was as slick as glass. The trigger pull was poetry. (The only thing like it today is the Korth, a German DA revolver, which is built entirely by hand and sells for $5,000 to $10,000.)

In 2010, I had to face the fact that I was no longer as steady as I once was, and never would be again, so I stopped shooting at 50-yard bull’s-eyes, and then reflected that the Python was worth quite a bit more than I paid for it. So I sold it for a very good price—and have regretted it bitterly ever since. The money is long spent, and the Python is gone.

I’ve been a southpaw shooter all my life, and while there are a fair number of left-hand rifles now, for many years the way of the sinistral shooter was hard. If you were a bolt-action fan, you could choose between Savage (cheaply made, with lousy triggers, but they shot OK) and Weatherby (terrific, expensive, and magnum cartridges only). There was no middle ground.

So in 1973, when Remington came out with its left-hand Model 700, I got one of the very first. But I did what many shooters who wanted something a little nicer than a factory stock did at that time. I bought a left-handed barreled action in .270 and had gunsmith-writer Russ Carpenter send to Reinhart Fajen for one of its classic stocks. (Fajen, Bishop, and Herter’s sold stocks with about 70 percent of the work done, and gunsmiths loved them.) Fajen sent a lovely French walnut stock of a higher grade than they charged me for.

Russ did the final inletting and finishing, and then the stock went to engraver Winston G. Churchill, who did flawless checkering. The finished product was not a true custom rifle, but it was a dandy nonetheless, the sort of hunt-anything, go-anywhere .270 that Jack O’Connor made a career of. I shot 130-grain screw-machine Nosler Partitions in a load that was so hot, I got occasional gas leaks around the primer.

Around 1978, F&S humorist Ed Zern happened to see me shooting it, and being a fellow lefty, he was much taken with the rifle. Whatever reasoning power I had departed my brain, and I sold it to him. Then, a couple of days later, when the full horror of what I had done became clear, I begged him to sell it back. He did, and was not happy about doing so. Then came the part I still don’t understand. Within a month, I sold it again.

I’ve been looking for that rifle ever since, and I know I’ll never find it.

In July 2006, I was scrolling through the rifles in Cabela’s Gun Library when I saw one that caused my glass eye to fall into my pablum. It was a left-hander of the kind that you encounter about as often as asteroids wipe out major cities. Ed Brown is known for very expensive 1911s of a quality that is as far above the average 1911 as heaven is of hell, and for a few years in the early 2000s, he made rifles that were equally fine.

The Ozark was Ed’s short-actioned lightweight model, although this rifle was not light. It had a 21-inch Shilen stainless barrel that was at least #2 contour, and possibly #3. Based on Brown’s wonderful Model 702 action, the rifle was fiberglass stocked, muzzle heavy, and shot, my records show, groups that measured .600-inch. It was one of the two or three finest deer rifles I’ve owned, and I’ve owned a pile of deer rifles.

What caused me to sell it, in 2013 or so, was my Ruger Gunsite Scout .308, which was also short, handy, and accurate and had good auxiliary iron sights and fed from detachable box magazines of 3-, 5-, or 10-round capacity, which makes it tactical. Why, my so-called reasoning went, keep an expensive rifle like the Ozark when the Scout would do exactly the same things? And so I let it go. The problem is that money does not trump everything, and you don’t sell something this good unless you have a head full of owls. If it ever shows up, I’ll buy it back.

There is some hope to all of this: I still have two Ed Brown .338s, a working one and a spare. I don’t need the spare, but I haven’t sold it, and I won’t. Eventually, and at great cost, we sometimes wise up.

This Westley Richards was built to the order of an Indian maharajah sometime in the 1960s. This gentleman was wealthy to the point where money didn’t matter, and he was also left-handed and an admirer of American firearms. So his rifle was stocked in the American style, for a lefty, and each set of barrels was fitted with an IER scope, which I’ve never seen before or since on a British Best rifle. As near as I could tell, the gun had never been fired. The rarity of such a rig is beyond my powers of description.

How much is it worth today? I can’t even guess. If you order a new Westley Richards Droplock double rifle, the price is $118,000. Add two more sets of barrels, IER scopes (or a more modern equivalent), and a completely nonstandard stock, and your guess is as good as mine. You can’t hunt with something like this; it’s too valuable to risk unless you can afford to replace it. But it occurs to me that if I’d raised the $24,000 back then and bought the gun, it would today be worth 10 times as much. More? Who knows? As the Amish say, we get too soon old and too late smart.