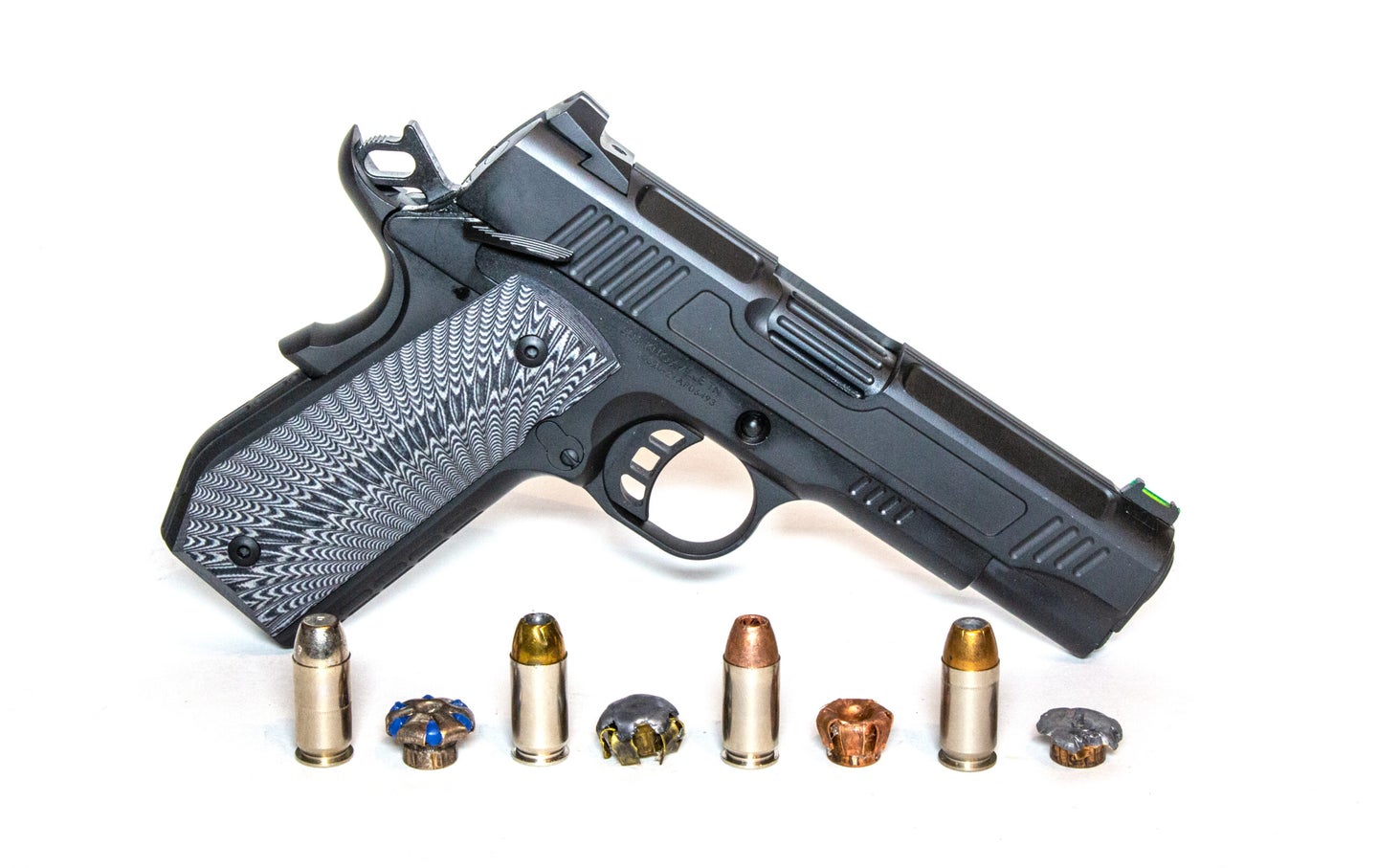 Many experts consider the .45 Auto the ultimate stopper in a practical defensive handgun. Richard Mann
SHARE

When it comes to handgun stopping power, there’s no shortage of experts, studies, theories, and anecdotes offering “definitive proof” that one cartridge is better than another.

The first murder I investigated was affected by a pellet rifle. Years later, a bad guy who shot a cop and ran through our roadblock and was perforated by multiple bullets from multiple guns—and he lived long enough to sue the police department. All the experts and formulas will tell you that these were near statistical impossibilities. But they both happened.

In 1904, Captain John T. Thompson and Major Louis A. LaGarde of the US Army shot living cows and human cadavers to determine which caliber should be used by soldiers. Julian Hatcher, a former Technical Editor at American Rifleman, based his theory of Relative Stopping Power on this study, and concluded that the .45 Auto was twice as effective as the 9mm. Today, .45 Auto fans swear this is the only study that matters.

Between 1975 and 1985, the National Institute of Justice (NIJ) formulated the Relative Incapacitation Index, which was a comprehensive study based on a computer-generated human. They concluded a 115-grain 9mm bullet was twice as effective as a 230-grain .45 Auto bullet. The 9mm fans rejoiced.

After the FBI’s tragic, and infamous, 1986 Miami Shootout, the bureau established their own testing methodology using 10 percent ordnance gelatin and various intermediate barriers. They determined that for law enforcement, 12 inches was the minimum acceptable bullet-penetration depth, and that the .45 Auto was twice as effective as the 9mm. The FBI’s protocol, along with its scoring system that somewhat defies the logic of basic math, gave us the .40 S&W in 1990. But the FBI returned to the 9mm 25 years later. The government knows best. Right?

In 1991 a privately funded group tested the physiological effects of bullet impact on medium-size animals. With the comical assumption that French Alpine goats are just humans with four feet, they shot 611 of them to establish incapacitation times. Known as the Strasbourg Tests, the revelation was that high-velocity bullets that violently expand worked best. However, because the original study was largely unsourced, some people think it’s as mythical as Xena the Warrior Princess.

At about the same time, the Naval Weapons Support Center (NWSC) tested 10 9mm loads seeking the best hollow-point for duty use. Along with terminal performance, reliability and accuracy were also measured. They used 20-percent ordnance gelatin because the Wound Ballistics Lab at the Letterman Army Institute of Research suggested it was better than 10-percent. With the belief that penetration beyond 12 inches would be hazardous to bystanders, the NWSC concluded that Federal’s 147 grain 9mm JHP was best.

Six years later, the Secret Service—secretly—conducted the Ammunition Effectiveness Study, basing their conclusions on a bullet’s ability to deposit energy in the first 5.9 inches of a block of 20-percent ordnance gelatin. The supporting logic was that the greater the energy deposit, the greater the potential for tissue damage. The best performing 9mm load was a +P+ 9mm 115-grain JHP. Ironically, it was a 115-grain 9mm hollow-point that failed the FBI in 1986 and launched their search for handgun stopping power Shangri-La.

In 1992, working police officers Evan Marshall and Ed Sanow wrote a book titled Handgun Stopping Power. They evaluated countless police reports, autopsies, victim statements, and photographs. They then fired hundreds of rounds of ammunition into 10-percent ordnance gelatin. The result was a mathematical formula that would supposedly allow a prediction of the chance of a one-shot stop. Though a revelation at the time, some—those who didn’t like the results—consider the book a work of fiction.

Two years later, the Canadians gave it a go, and the Royal Mounted Police conducted an FBI-like test without all the intermediate barriers. However, they smartly embeded some pig ribs into the gelatin. They very scientifically concluded that there were in fact 9mm and .40 S&W loads that “are comparable or exceed” the terminal performance of their then duty .38 Special load. Eh, really? No wonder this study has not received a lot of attention.

The Truth: Handgun Stopping Power Is Impossible to Predict

This all goes to illustrate two very important things. First, even the very best experts, with the very best data, cannot agree on anything when it comes to handgun stopping power. Second, there just isn’t a simple answer to the question—no one best cartridge when it comes to stopping power. Humans can’t resist the urge to apply order to chaos and rate everything on a numbered scale. The problem is that a shooting is a chaotic interaction that can only be accurately evaluated after the fact. It is not something theories or numbers can reliably predict.

Also, the question at hand involves one very important factor that none of the tests take into account: You. The real answer depends on your individual shooting skills and recoil torrence, etc. The .357 Magnum, for example, make a great stopping load, but it’s just too much for many shooter to handle and use effectively. If your main concern in choosing a defensive handgun is stopping power, get the most powerful handgun that you can comfortably carry concealed, and that you can shoot with speed and accuracy. Then pick the expert, theory, or formula you like best to support your choice. They’re all right (and wrong).