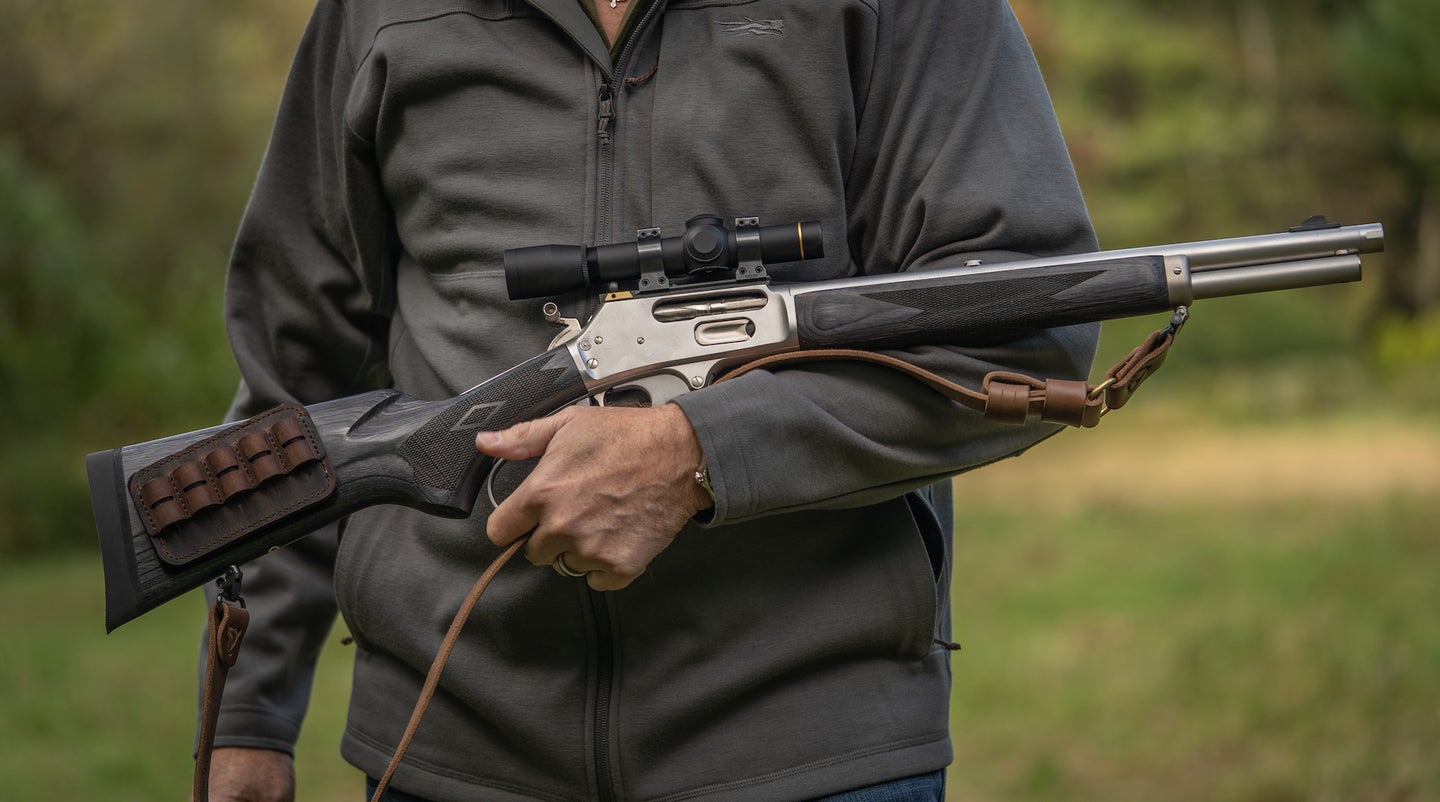 We replaced the factory Skinner rear sight with a Skinner sight that has integral grooves for scope mounting and placed a Leupold FX-II Ultralight 2.5x20mm riflescope on the rifle for our test. Sabastian Mann
SHARE

Marlin’s new 1895 Trapper was the only lever-action rifle included in our 2022 rifle test, but it received exceptional marks, quite frankly, because it is an exceptional rifle. The Trapper marks the second new lever gun from the new Marlin, which is now under the control of Ruger. But the Trapper is not new to the Marlin lineup. When Remington owned and operated Marlin—pre-2020—they also offered a Trapper. Essentially, this new Trapper is the same rifle, but with a few refinements.

One of the first things you’ll notice about the Trapper is it has a matte stainless-steel finish. This is ideal for hunting, and combined with the very dark laminated wood stock, it gives the rifle an air of seriousness. The butt stock and forend are also tastefully checked and there’s a thick butt pad that you’ll appreciate when you get behind this rifle on the bench. The barrel measures 16.1-inches long and the magazine tube extends nearly to the muzzle. It’s just short enough to permit the attachment of a suppressor or a muzzle brake to the 11/16×24-inch-pitch threaded barrel.

The Trapper is also equipped with a fully adjustable Skinner aperture rear sight, and a Skinner Bear Buster front sight. This is a great combination for a short-barreled thumper like the Trapper, but during our test, we felt there was a better option, especially since we wanted to mount a riflescope. We replaced the factory rear sight with a similar Skinner sight that is grooved to accept Talley scope rings. We also mounted Leupold’s excellent and extremely light and compact, FX-II Ultralight 2.5x20mm riflescope, and zeroed the rifle with mid-level .45/70 loads.

With mid-range loads like Federal’s HammerDown, the Trapper was jumpy, especially at the bench. At 100 yards, most of our groups were in the 1.75 to 3-inch range, but keep in mind we were shooting with a 2.5X optic. At 50 yards, most of the loads nearly stacked the bullets on top of each other. When shooting off-hand we found the lightest .45/70 loads very comfortable and the mid-range loads were much less aggressive. It’s not so much that this seven-pound rifle pounds your shoulder, it’s that it likes to buck. Muzzle jump is pronounced with heavy loads, and with some loads, you’ll see a beachball-sized fireball at the muzzle.

Where this rifle really shined was in how it handled. In hand, it feels as nimble as a claw hammer—it’s fast to your shoulder and just as fast on target—but when you start pulling the trigger, the Trapper turns into a sledgehammer. By lever-action standards, the trigger is marvelous and breaks crisply at 3.75 pounds. The rifle performed exceptionally well on our practical hunting test, and all our test participants fawned over it like it was a jacked-up, tricked-out, four-wheel drive, with a big block under the hood.

One thing we found while shooting the trapper was that mid-level loads struck the target too low when we took off the scope and switched to iron sights. To sort this out, we reached out to Skinner Sights, and they sent us a shorter Bear Buster front sight. As an aside, it’s important to consider optics and sight configurations with a .45/70. Running a single zero for various power levels of ammo can be problematic; at 100 yards you can see more than a foot of difference in trajectory.

During our test, the Trapper received its highest marks in the quality of construction and balance categories. It got low marks under the shooting comfort category mostly due to recoil. Also, its marks were low in the versatility column because this is a big game and/or a bear/self-defense rifle, and nothing else. But of all the lever guns offered by Marlin since the turn of the century, this is my favorite. It’s also a hell of a lot of fun to shoot.

The only thing I didn’t like about the Trapper was that the barrel had a dovetail cut for a barrel-mounted sight. I have no idea why someone would prefer a traditional blade rear sight to an aperture sight, unless they wanted to mount a scope and wanted to install a barrel-mounted rear sight as a backup. For me though, the mid-barrel dovetail—even though it has a slug inserted—detracts from the graceful lines of this elegant lever gun. If Marlin cares what an old, hillbilly gun writer thinks, I have two pieces of advice to offer them. Ditch the barrel dovetail and make this exact same rifle for the .35 Remington. I’d buy two of them.