The Hottest New Rifles of 2023

Straight from SHOT Show, here are the latest rifles for 2023 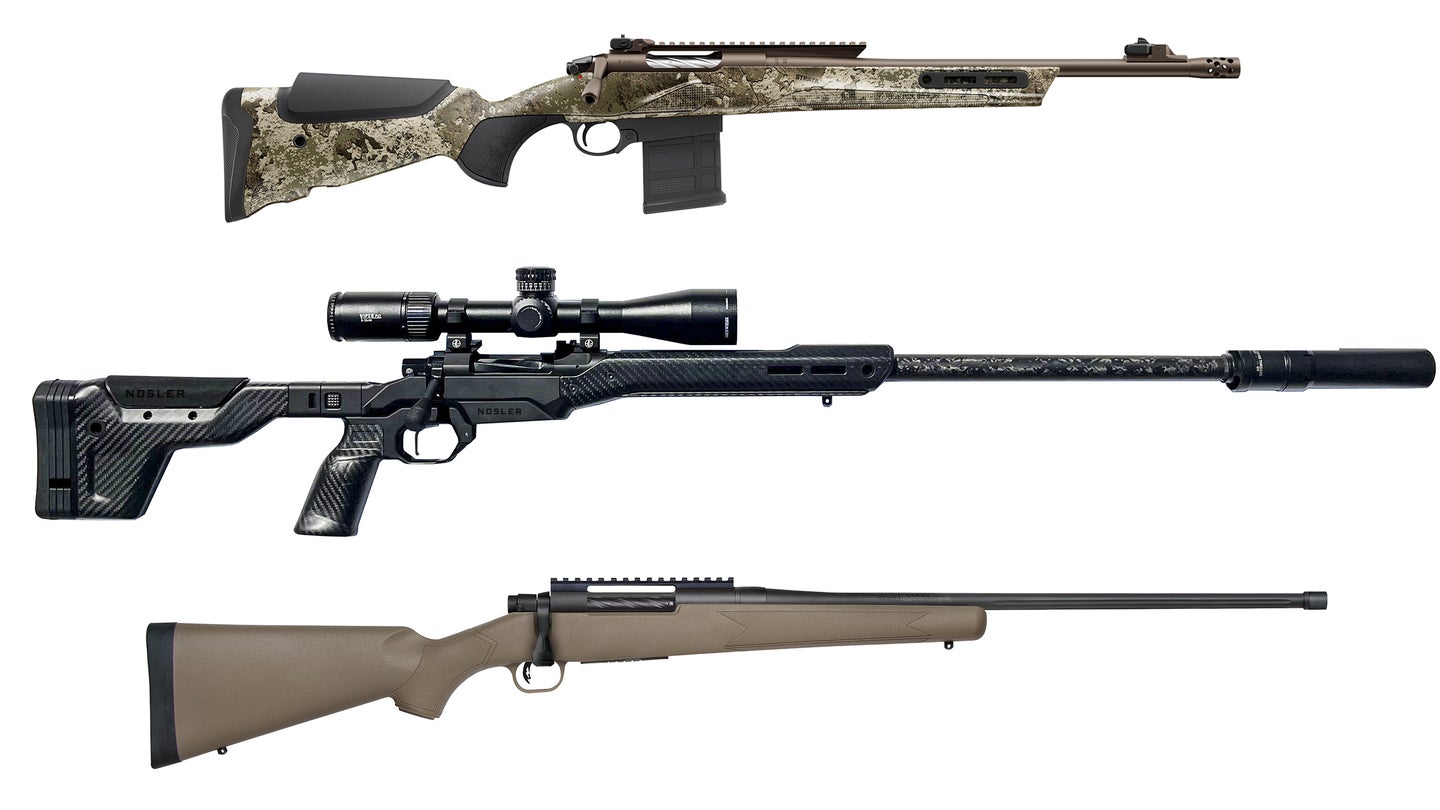 Follow our full coverage of the latest and most talked-about new hunting equipment for 2023, including shotguns, trail cameras, knives,  compound bows, crossbows, broadheads, and more.

Though some manufacturers introduce new rifles mid-year, many follow the tradition of launching new products at the annual SHOT (Shooting, Hunting, Outdoor Trade) show each January. Hunters and shooters anticipate these announcements with the hopes of seeing the rifles they’ve been dreaming of finally becoming a reality. We hope for things like the reintroduction of the Savage 99, a brand new bolt-action in .358 Winchester, or something so new and so exciting we just can’t live without it. This year, we’re seeing a lot of new offerings from the likes of Mossberg, Benelli, Stag Arms, Bergara, and more. There’s also the return of a classic, the Marlin 336. Here are some of the latest rifles from the 2023 SHOT Show.

Though it seems hard to comprehend, the walnut-stocked version of the Benelli Lupo has not been available in .308 Winchester or .30/06 Springfield. For 2023 Benelli has corrected this oversight, and both are now offered with a threaded, 22-inch, free-floating barrel that’s been Crio-treated. With their two-piece stock, these three-lug bolt-actions with a 60-degree throw come with a detachable magazine, an adjustable trigger, and a two-piece pic-rail optics mount. The wood stocks are AA-grade checkered walnut, and they feature the progressive comfort recoil reduction system. With a slightly less than 45-inch overall length, weight is right at 7.0 pounds. The walnut-stocked Lupo will sell for around $2,199. —Richard Mann

Blaser has teamed with the sporting lifestyle brand Ball and Buck and to announce their partnership they’re launching a special edition of their R8 hunting rifle. Each rifle features a hand-carved, and hand-finished walnut stock with leather accent pads on the forend and at the comb with blaze-orange stitching. The matte-black receiver is custom engraved, and each rifle is individually numbered on the pistol grip cap. The rifle also features Blaser’s quick change caliber selection system that allows shooters to fire a plethora of cartridges from .22 LR. To .458 Winchester Magnum. It’s available with a multi-caliber hard case with Ball and Buck camo lining exclusively through Clay Shooter’s Supply in Dallas, Texas for—hold your breath—$9,500.00. —R.M.

Count me among those who’ve always preferred the Marlin 336 over the Winchester 94. I’ve got an original, JM-stamped 336 of my own in .35 Remington, but the .30-30 versions were far and away more popular in the Kentucky deer camps I frequented as a kid. Like most Marlin fans, I’ve been encouraged by the new Ruger-made 1895s in .45-70, but what I really wanted to see was an update of the classic deer rifle. Yesterday, I did. I got to shoot a half dozen rounds through the brand-new Marlin 336 Classic, built under Ruger ownership, and I was impressed. The rifle was easy to hit with. The test model wore open sights, but it’s of course drilled and tapped for a scope base. Aesthetically, it looks just like a later-model original Marlin (it does have a cross-bolt safety). It would be just as handy in the timber, too, with a 20.25-inch barrel and 6+1 capacity. The rifle I shot was chambered in .30-30, which is probably the better way to go, but I’m told the new 336 Classic will be available in .35 Remington, too. That’s good timing, since a couple major ammo makers (Federal and Remington) are again loading that classic round. New 336 Classic rifles will supposedly be available in early 2023. —Will Brantley

This new rifle from Franchi, which is based on their Momentum platform, sort of has a general-purpose/scout rifle-like vibe. It’s available in either .223 Remington or .308 Winchester and comes with a threaded 18-inch barrel. Out of the box, it measures 40 inches and weighs 7.5 pounds. It’s fitted with an extended one-piece Picatinny rail that free floats over the barrel and is equipped with an unusual set of fully adjustable open sights, with the rear sight integrated into the optics rail. Other features include a detachable 10-round AICS magazine, an adjustable trigger, M-Lok slots on the forend, a TrueTimber Strata finish on the synthetic stock, and a Midnight Bronze Cerakote finish on the steel for an MSRP of $1,499. —R.M.

Consumers drive the market and right now hunters and shooters can’t get enough long-range precision rifles. Mossberg has answered this call for 2023 with what they’re calling the Patriot LR Tactical. Built on their popular Patriot action, these rifles will be available in 6.5 Creedmoor, 6.5 PRC, and .308 Winchester. The Creedmoor and the .308 come with a 22-inch barrel and the PRC has a 24-inch tube—all muzzles are threaded. The barreled action rests in an aluminum V-Block, inside an M-Lok compatible MDT chassis style stock that has an adjustable length of pull and comb. These rifles accept AICS-style magazines, have fluted bolts, an oversized bolt handle, and come with a Picatinny scope rail already installed. Rifle weight ranges from 8.8 to 9.4 pounds, and the MSRP is $,1085. —R.M.

No, the Patriot Predator from Mossberg is not a new rifle. What is new is that now this rifle can be had in the new 7mm PRC cartridge. The Patriot features Mossberg’s proven, push-feed, twin-lug action that feeds from a flush-fitting polymer magazine. It’s carbon steel barrel is free-floated and threaded at 5/8×24, and it comes with a protective cap and an 11-degree match crown. It also comes out of the box with a Picatinny scope rail and Mossberg’s patented Lightning Bolt Action Trigger. Two finish options are available for the new Patriot Predator: One has a flat dark earth synthetic stock with a matte blue finish on the metal ($519) and the other has a True-Timber Strata camouflaged polymer stock with a brown Cerakote metal finish ($616). —R.M.

Nosler has added a chassis rifle to their excellent line of fine-shooting bolt action rifles. Nosler’s Carbon Chassis Hunter has a magnesium alloy frame with a carbon-fiber pistol grip and a foam-filled, carbon-fiber foldable buttstock with an adjustable comb. The forend is also made of carbon fiber and has an integral ARCA rail and M-Lok compatibility. This rifle will be offered in 6.5 Creedmoor, 6.5 PRC, 28 Nosler, and 300 Win. Mag., with a threaded, Sendero-profiled, match-grade, 24- or 26-inch carbon fiber wrapped barrel. The spec on this rifle that will really get your attention is the weight, which ranges from only 6.9 to 7.1 pounds. A trigger Tech trigger is standard on this rifle which is light enough for the hunter and precise enough for competitors. MSR will be around $5,395. —R.M.

For the first time in the company’s history, Stag Arms is offering several rifles designed specifically for hunters. They include two new Stag 15s and two new Stag 10s, chambered for the 6.5 Grendel, 350 Legend, 6.5 Creedmoor, and the .308 Winchester. These rifles are in the new Pursuit hunting line from Stag Arms. All four are treated with a midnight bronze Cerakote finish, and come out of the box with a Timney, curved, short, two-stage Targa trigger. They also come standard with a black Magpul K2+ vertical grip and black CTR stock, as is a unique leather wrap with the Stag logo that covers the comb of the buttstock. The Pursuit line rifles will have an  M-lok compatible slimline handguard, threaded muzzle, and brake. Barrel length varies from 16- to 18-inches depending on chambering. The Pursuit Stag 15s have an MSRP of $1,599 and the MSRP for the two Stag 10s is $2,199. —R.M.

Bergara believes they’ve created the ultimate rifle designed for mountain hunting. It features a 100-percent carbon fiber monocoque stock that incorporates a carbon fiber spine to provide increased strength and rigidity. The B14 Squared Crest is built around Bergara’s famous B14 action with its 90-degree bolt-throw and sliding extractor. It’s fitted with a fluted 4140 chrome moly steel, 20- or 22-inch barrel with a threaded muzzle, that comes standard with a Bergara Omni muzzle brake. All metal surfaces are finished in a sniper grey Cerakote. Unloaded, the rifle will weigh in at only 6.9 pounds. B14 Squared Crest rifles will be chambered for 6.5 Creedmoor, 6.5 PRC, .308 Winchester, or .300 Winchester Magnum, and they’ll all feed from an AICS detachable magazine. The rifle comes with a sub-MOA precision guarantee, has an MSRP of $1,999, and is an exciting addition to the Bergara line of fine shooting rifles. —R.M.

For 2023, Bergara will begin offering a carbon-fiber barrel option on their B14 Wilderness HMR and B14 Wilderness Ridge series of rifles. Both rifles will now be available with a number 6 contour, 410 stainless steel barrel, wrapped in carbon fiber. All barrels are threaded at 5/8×24 and they come with an Omni muzzle brake already installed. With both rifles, 20-, 22-, or 24-inch barrel length options are available depending on chambering. Prices for the carbon-fiber barreled Wilderness Ridge rifles start at $1,599 and prices for the Wilderness HMR rifles start at $1,850. —R.M.

Read Next: The Hottest New Rifle Scopes of 2023

The new Browning rifle that really caught my attention is this suppressor-ready version of their X-Bolt Speed, which is offered in 12 different chamberings from .204 Ruger to .300 PRC. The rifle is outfitted with a composite stock with a OVIX camo finish, and it pairs very nicely with the smoked bronze Cerakote finish on the metal to make a very attractive rifle. The fluted, sporter weight barrels range in length from 18 to 22 inches—depending on chambering—and they all have a fast twist to accommodate high BC bullets. Being suppressor ready, the barrels are of course threaded, and each rifle comes with a muzzle brake. The light weight of these rifles, which ranges from only 6.12 to 6.62 pounds, is also appealing to those who like to go deep or climb high when hunting. MSRP will be $1,429 to $1,529.