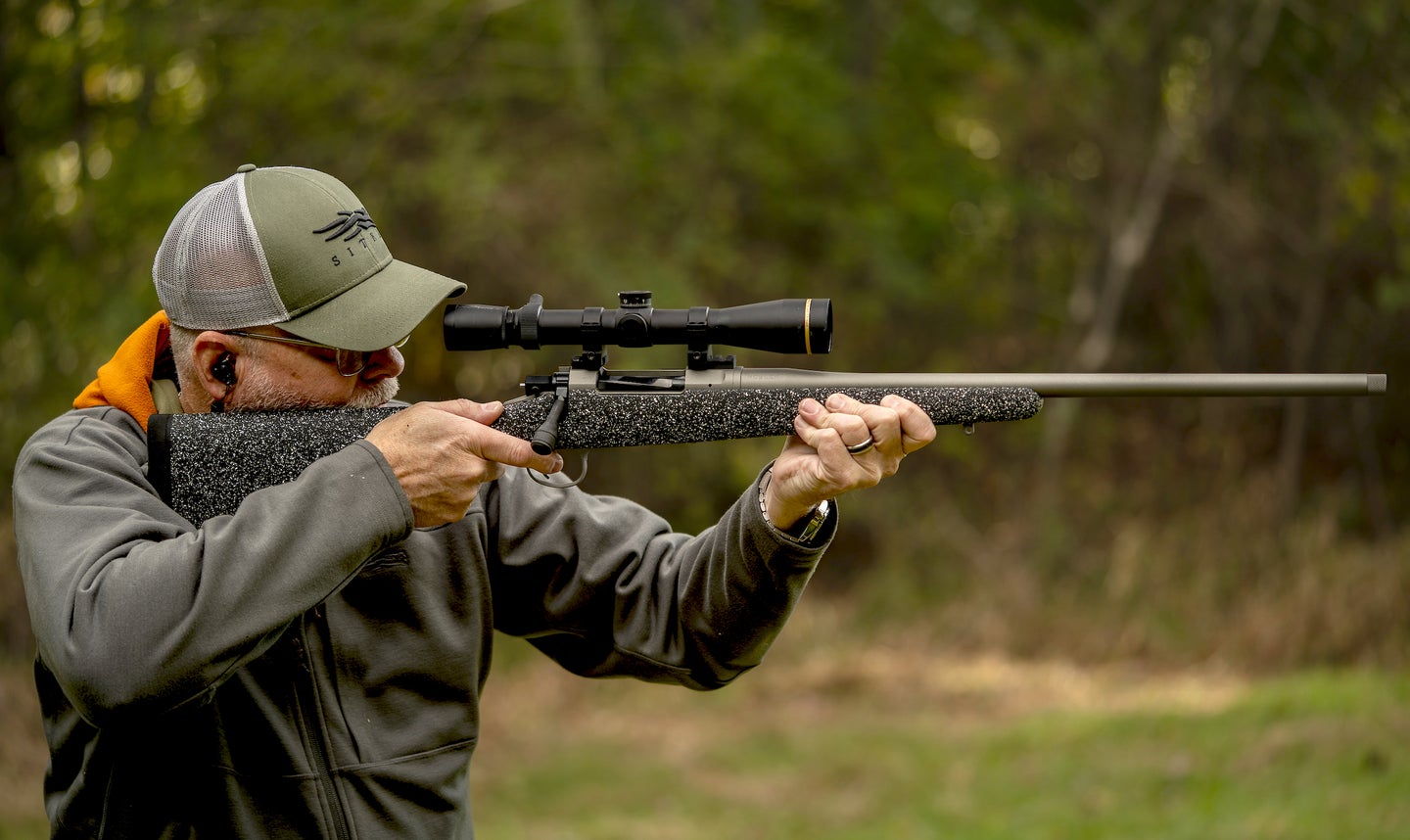 With its fantastic balance, the Nosler Model 21 is naturally adapted for off-hand shooting.
SHARE

We did not name a “best overall rifle” of the 10 we tested during the 2022 F&S Rifle Test, but we all agreed that if we did, the Nosler Model 21 would have taken the award. Instead, Nosler’s new bolt-action took the title of Best Hunting Rifle and won it hands down.

Why were we so enamored with this rifle? Partially because it’s very well made, partially because it shot exceptionally well, but mostly because it’s the complete package—offering nearly everything you need in a hunting rifle and nothing you don’t. Since 1948, Nosler has made quality bullets and firearms for serious hunters, and it’s clear that when Nosler went to the drawing board to conceptualize the Model 21, there were some serious hunters speaking their minds.

The action and one-piece fluted bolt body for the Model 21 are wire EDM machined from 4340 Chrome Moly steel. The action is similar in design to the HOWA 1500 with twin lugs, a plunger-style ejector, and a Sako-like, M16 extractor. Nosler offers long and short-action versions of the Model 21, and both are outfitted with a 2.5- to 5.5-pound adjustable Trigger Tech trigger and a Shilen match-grade stainless steel barrel.

The barrel is threaded at the muzzle, with either a ½-28 or 5/8-24 TPI, depending on caliber. The bolt handle is slightly oversized, but it is also threaded at 5/16-24 TPI to accept after-market bolt handles, and it is Nitride coated. Nosler Cerakotes all the other metal surfaces on the Model 21.

The barreled action is bedded with aluminum pillars to a carbon-fiber McMillan Hunters Edge Sporter stock. It comes standard with a one-inch recoil pad and a 13.5-inch length of pull. There is a minute amount of drop in the stock, but it is not excessive. When a conventional-size scope is mounted—low—your eye should naturally line up with the center of the scope while still affording a good cheek weld. It has a hinged floor plate and an internal magazine capacity of three or four, depending on the chambering.

Shots Fired: How the Nosler Model 21 Did in Our Test

During our Field & Steam 2022 rifle test, we fired the Model 21 120 times. This included familiarization, precision testing at distance, and all the shooting during practical hunting drills. There were no issues of any kind. But that’s only part of this rifle’s story. I actually received this rifle a few months prior to our rifle test and the first thing I did was start a logbook. It came from Nosler with a suggested break-in procedure, and while I don’t believe a break-in determines the performance of a rifle barrel, I followed the procedure because the manufacturer suggested it.

Using the Sig Sauer 140-grain OTM load, I fired 10 shots and cleaned after every shot. I then fired 15 shots, cleaning after every three shots. Then I fired five shots, cleaned the barrel, and fired a single, fouling shot. Next, I fired five shots for the record. The 31 shots fired during the break-in procedure produced a group that measured 1.25 inches. The five shots fired after the break-in procedure measured 0.566-inch. Both groups were impressive. Since then, a lot more five-shot groups have been fired with an additional 11 different loads. The average for every group fired was a stunning, 0.94 inches. This is indeed a sub-MOA bolt-action hunting rifle, and pound for pound, it delivers exceptional precision.

But there are no benches or sandbags in the field, and this is after all a hunting rifle. And a hunting rifle needs to perform when shooting offhand and from various field shooting positions. When it comes to off-hand shooting, the rule with rifles is that if they are butt heavy, they handle well, and if they are muzzle heavy, they’re easier to shoot off-hand. The Model 21 is neither butt nor muzzle-heavy, the rifle balances right at the front guard screw, right between your hands. This means that it not only handles well, but it also means it can be shot well in the field. Because of this the Model 21 performed better than every other rifle we tested during the practical hunting/shooting phase of our test.

Though I thought this a fabulous rifle, I did not love everything about it. For pure perfection, I would have preferred a trigger/safety system that locked the bolt when on safe, either a neutral or some negative drop in the stock, and a different color scheme on the stock. With its dark black/charcoal base and random white speckling, the rifle looks like it was birthed in the bottom of a pigeon cage. I’d also like to see a few more non-Nosler cartridges offered. You might say I’m nitpicking, but, well, nitpicking is my job.

I do however believe that—pigeon poop stock aside—the Nosler Model 21 is one of the best five rifles I’ve ever tested. It delivered flawless operation, great precision, was comfortable to shoot, it was not too heavy, and it was very comfortable to carry and easy to manipulate. As far as bolt-action rifles go, you’ll struggle to find one its equal without spending substantially more money. Many hunters will go through a lot of rifles looking for that special one. You could just start with the Nosler Model 21 and save yourself a lot of time, money, and frustration.