Do You Really Need An Aftermarket Turkey Choke?

Maybe not. Some factory chokes work great. But if you want to reach way out with the tightest pattern possible, you'll want to try at least one aftermarket turkey tube 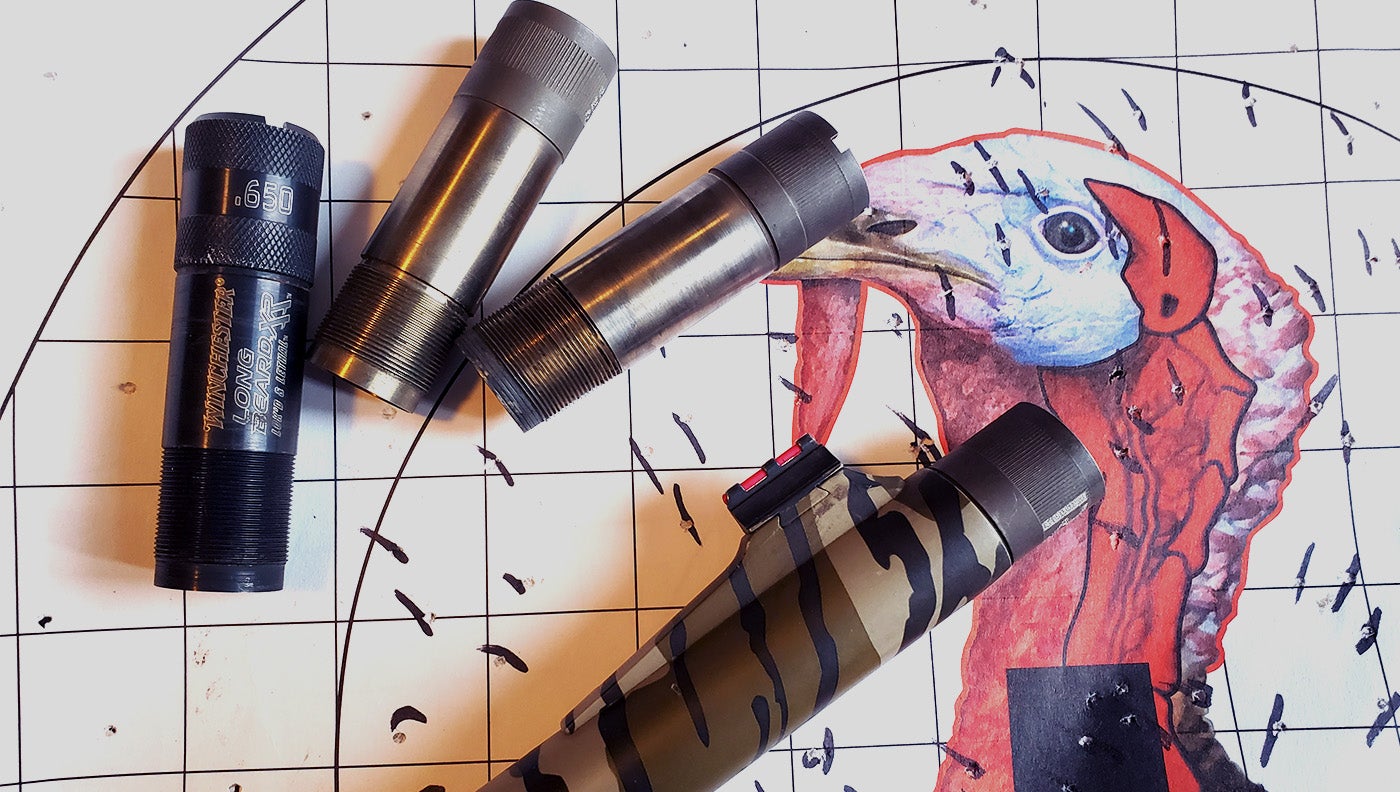 The author has tested a wide variety of standard and aftermarket turkey chokes. Phil Bourjaily
SHARE

When fellow turkey hunters I know buy a new turkey gun, the first thing they ask me with what choke they should get for it. I usually answer their question with a question. “Maybe,” I say, “Have you tried the one that came with your gun?” They haven’t. Checking out your factory choke is a good place to start. So, let’s start there.

When Factory Chokes Are Enough

Most turkey models are packaged with an X-Full choke, and a lot of them shoot fine. On an Osceola hunt a few years ago, our group of hunters and writers patterned then-new 20-gauge Long Beard through Winchester factory turkey chokes and got genuine 45-yard patterns out of them. If that was my gun, I’d have called it good.

Even a factory Full choke might perform satisfactorily with premium ammunition like Long Beard or TSS. So long as your gun-choke-and-load combination puts 100 pellets into a 10-inch circle (or close to it) at the maximum range you’d let yourself shoot, you’re set. Save money. Save your shoulder. Go hunting. Just plan on letting those 50 yard birds live to gobble another day.

Of course, some factory chokes are awful. Or maybe your dreams are be haunted by birds standing just out of range and thumbing their snoods at you. You want all the range you can get. In either of those cases, you should buy a new choke. Aftermarket tubes usually do outshoot factory chokes. Now the question becomes, which one to buy?

Branded Chokes Can Save Time and Trouble

The shortcut is to let someone else do your homework for you and buy a choke tested with a specific shell. You can buy a Long Beard choke, or a Federal TSS choke, for instance, and be fairly confident it will shoot really well with those loads. Those may or may not be the absolute best chokes for that load in your gun, but they should be close, and they’ll have been shot with those loads a very great deal. They also may or may not work great with other loads, to boot.

Choke-maker George Trulock describes testing branded TSS chokes by shooting 25 to 30 loads through each of a variety of tubes decreasing in constriction by .005 increments, until he found the right dimensions. And he waited for the barrel to cool between shots and only shot on days of similar ambient temperature and barometric pressure. Most of us would go broke shooting that much TSS, even if we had the time and patience to shoot that way. As a bonus, Trulock says, he holds his branded chokes to somewhat tighter tolerances than usual. So, if there’s a brand of ammo you want to shoot at turkeys, this is good way to go.

Some Rules of Thumb with Aftermarket Chokes

If you’re not going the branded tube route, here are some things to consider as you choose a choke: Tubes that work best with TSS tend to be much tighter than those for lead and HeviShot. Many hunters have found that very tight chokes, like .640 and .650 work best with small TSS pellets, while larger .665 and .660 are better with lead. I have what I think of as all-around turkey chokes in my 870s that I can use for hunting and for testing a variety of loads: a .660 Rob Roberts in the 12-gauge, a .575 Carlson in the 20-gauge.

Neither choke is ported, though ports can help patterns by slowing the wad and helping it separate cleanly from the shot charge. In my experience with ported tubes, despite claims to the contrary, is that their ports have approximately zero effect on recoil and muzzle rise. They can be more time-consuming to clean than unported chokes, too, although most of don’t shoot our turkey guns enough to really gunk up ported choke tubes. Some chokes have grooves, slits, or straight rifling in place of or in addition to ports that help with slowing the wad. It’s also worth noting that while I have had good results with costly custom tubes, I have also had good results with much less expensive tubes like the Primos Jellyheads.

Buckle Up, Because It Can Be a Journey

Finding the right choke can be easy—or it can become an ordeal. Once, in need of a choke to test some ammo, I stopped at a gun shop on my way to the range and bought the only suitable 20-gauge turkey choke on the pegboard. I put that .575 Carlson in my gun and it shot great patterns that day, and it shoots well with any load I run through it. I see no reason to buy anything else.

On the other hand, the Mossberg 835 I have been hunting with the last two seasons started out as a $175 used gun with a choke tube rusted in the barrel. It shot okay, not great, and that was reason enough to buy a new barrel. I had a choice between 20 and 24 inches, and wanted the shorter, handier barrel, despite having been told by a couple of choke tube experts that it’s hard to make 20-inch barrels shoot well. Longer barrels of around 24 inches tend to stabilize shot charges better, they said.

I should have listened to the experts. Instead, I went through half a dozen or so chokes trying to make the gun shoot as well as my 12-gauge 870 Super Magnum. It patterned badly with almost everything and was especially disappointing with high-dollar TSS. Finally, the late Clark Bush, one of the experts whose advice I had ignored, took pity on me and sent me a Truglo Strut Stopper from one of his own guns. Now I have an 835 that will shoot pellet hole for pellet hole with my custom-choked 870 Super Magnum.

Since then, I have killed three turkeys with the 835, and they have fallen over very dead. That’s because I shot them with the right choke and load. It’s also because they were standing at 30, 18, and 25 yards respectively, all within range of a factory Full or the crummy choke that originally came with the barrel.