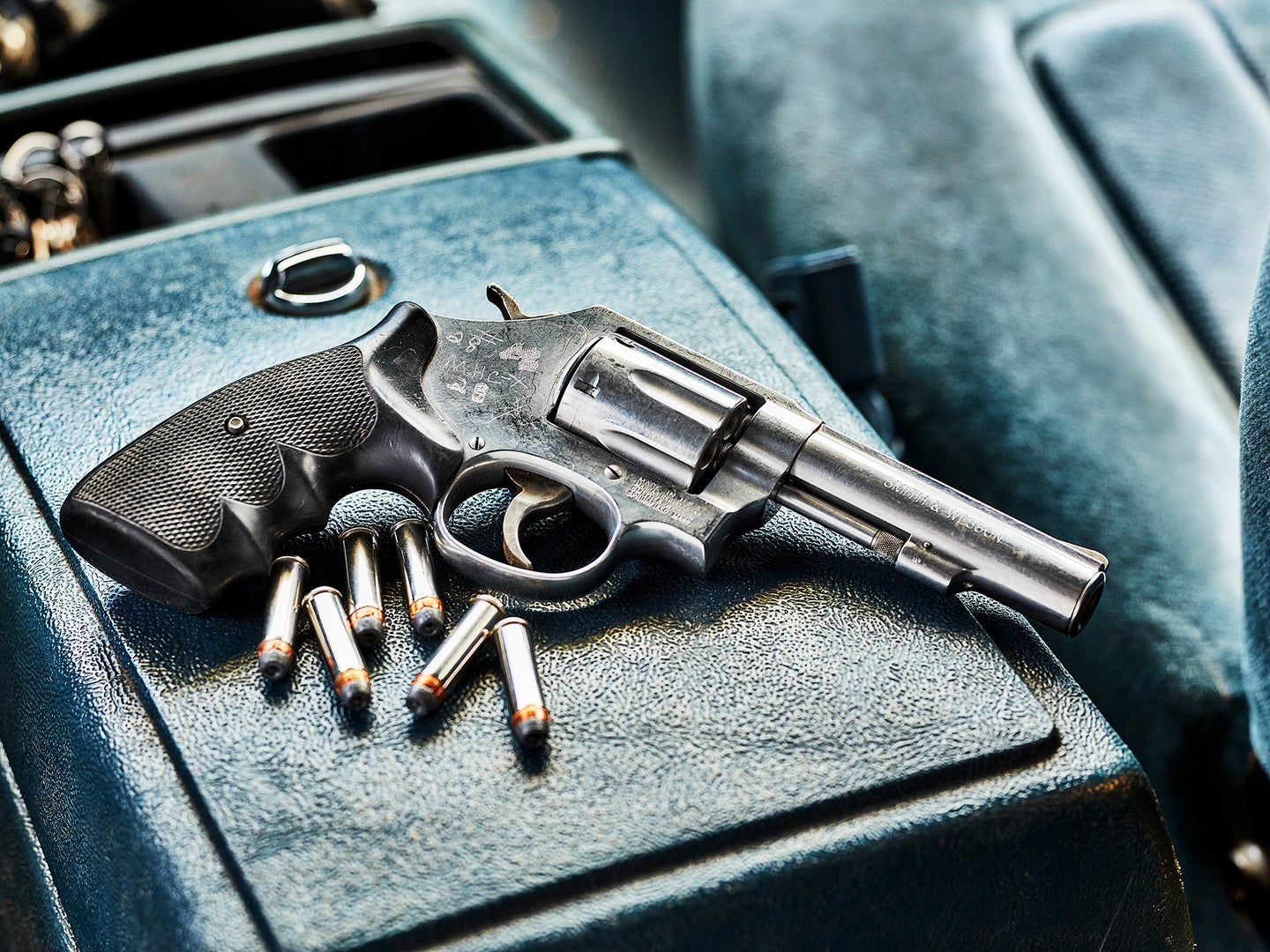 The security officer who carried this gun etched his badge number in the frame with a Dremel. Jarren Vink

My Truck Gun: The Hammer

A marred police revolver, at a can’t-beat price, makes the perfect tool for the truck or tractor

IF YOU WANT to prove once and for all that your gun means no more to you than a hammer on your workbench, etch your brand into it with a Dremel tool. That’s exactly what someone did to the side plate of my truck gun, once upon a time. I couldn’t see the artwork at first, but that was a ploy by the gun shop owner who had the revolver for sale. It was sitting under glass with its good side up—and marked with a suspiciously low price tag.

It would’ve gone unnoticed without the price tag, because it was a Smith & Wesson Model 64, the stainless K-frame military and police revolver with fixed sights—one of the most vanilla handguns ever made. Picture the archetypal 4-inch .38 six-shooter carried by uniformed law enforcement back in the ’70s and ’80s. The gun is so boring, in fact, that California has never outlawed it, and at one time it was even authorized for duty use by the NYPD.

That doesn’t mean it isn’t a good gun—and I’m a sucker for any double-action revolver. So I asked to have a look. The guy behind the counter opened the cylinder and slowly turned the gun to where I could see the other side. The engraving was suddenly revealed like a tattoo in swimsuit season. The guy explained that the revolver was a trade-in from a private security company, which had evidently etched in the officer’s badge number. Hurriedly, it looked like.

“That might be the ugliest gun I’ve ever seen,” I said. But the 64 Smith was clean, and it locked up tight, and since the asking price wasn’t much, I paid it on the spot. Later that day, I took it to a woodlot where I often hunted squirrels, and I lined up some cans at 25 yards. With 158-grain semi-wadcutters, it shot like an extension of my hand. I stuck it in the glove box of my work truck, and it’s more or less lived there since then.

That is, except when it becomes my tractor gun. Coyotes in this part of the country have learned that the sound of a tractor and mower means a smorgasbord of maimed rodents. They’ll come right to it, like bears running toward gunshots to steal downed deer and elk. Lots of farmers keep rifles handy for this, but that can be problematic. My father-in-law once bumped the stock of his .22 rifle and watched it bounce right off the side of the tractor, underneath the back tire, and into the rotary cutter, which barely choked while chewing it into three mangled pieces.

You give up some range with a handgun, but it stays in a holster, secure until it’s needed. And the Model 64 is perfect. Coyotes loping along at 25 yards are in trouble, plus, when I need to knock loose a rusty hitch pin, I can unload my revolver and wield it like a hammer. The gun has seen worse, and it has the engraving to prove it.