Battle of the Lever Guns: Winchester Model 94 Vs. Marlin 336

When it comes to these two classic lever-actions, everyone has a favorite. But is one really better than the other? 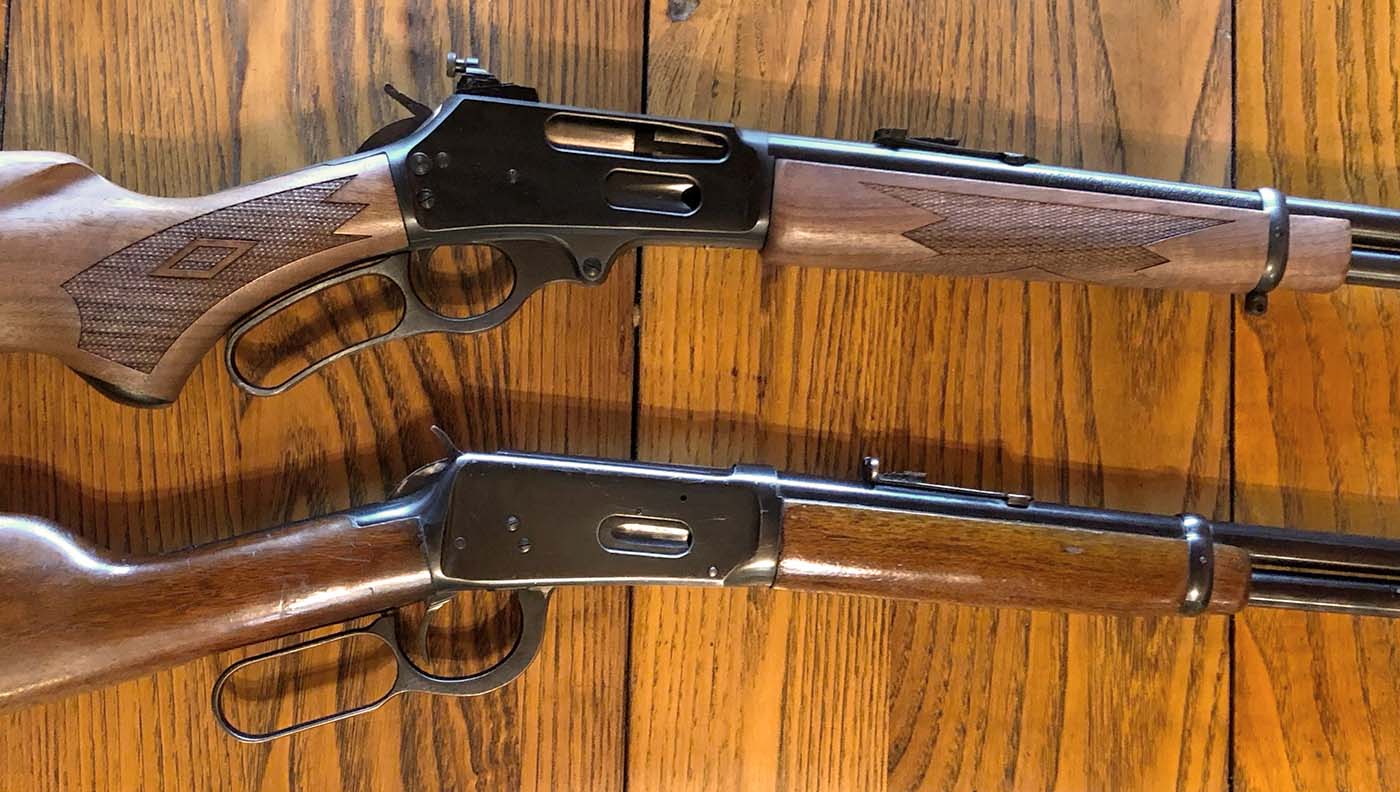 Two of the most popular and successful rifles ever made, the Marlin 336 (top) and the Winchester Model 94. Matt Every
SHARE

In a perfect world, I’d start this post by writing, “In my experience with the 17 Model 94s and 11 model 336s I’ve owned….” But ours is not a perfect world. In 60-plus years of owning and shooting guns, and 50 of writing about them, I’ve owned handful of Marlins and only one Model 94 Winchester, although I’ve had a reasonable amount of experience with both.

I bought my first Marlin in 1968 for my first deer hunt. I bought my 94 in the late 1980s because it was made in the same year as myself, before World War II, and it was absolutely mint.

This does not mean I’m a bad person. Some gun writers just don’t seem to gravitate toward lever actions.

Pros and Cons of the Winchester 94 and Marlin 336

Used within their limitations, few rifles work as well as the 94 and the 336. Both are among the most popular and successful centerfires ever made. The Model 94, which is a John M. Browning design, was in production from 1894 to 2006. It then took a hiatus from that year until 2011, and is again being made. Over 7,500,000 have been produced in a dizzying array of calibers and configurations.

The Marlin 336 debuted in 1948, and is an update of the Marlin Model 36. It is, I think, the second most popular rifle made in America, coming in behind the Model 94 with 6 million sold. Like the Winchester, it has been made in all sort of versions and calibers. In 2010 Remington Arms bought Marlin and brought the operation from North Haven, Connecticut, to North Carolina, where it could join Remington’s former owners in their Dance of Doom. In 2020, Marlin—what was left of it—was bought by Ruger, and we are expecting a 336 rebirth this year. We shall see.

Both guns were intended as carbines with 20-inch barrels. There have been rifle versions with barrels as long as 24 inches (or as short as 16) but these are a hissing and a byword. I have a Model 94 NRA Centennial Musket with a 26-inch barrel that I won at a trap shoot and it is a horrid and ungainly thing.

By some mysterious process, the Model 94 acquired the generic title “deer rifle.” For decades, if someone was talking about a rifle for hunting deer, they were talking about a 94. This never happened for Marlin.

But the 336 had other things going for it. The Model 94 ejected from the top. Since it was designed for iron sights this was not a problem. However, the 336 ejected from a port in the side, which meant not only that the receiver was much stiffer, but that it was an easy matter to mount a scope on it. Later on, there were attempts to torture the 94 into side ejection, but people would not have it.

The 336 has fewer parts than the 94. It has a trigger that can be made shootable with some work, while the 94’s is fairly wretched and shall ever remain so. The 336 buttstock has a pistol grip that feels much better to my hand than the 94’s straight grip. The 336 weighs, on average, about half a pound more than the 94. This doesn’t sound like much, but the two rifles have an entirely different feel. The Marlin tends to be slightly muzzle-heavy, and hangs on a target much better for me than the Winchester. Both rifles carry well in the hand, with perhaps a slight edge to the trimmer Winchester.

The Model 94 cleans from the muzzle, which means you have to be plenty careful not to wear down the rifling with your cleaning rod, but the Model 336 bolt can be removed so you can clean from the breech.

The Model 94, for all its different chamberings, has come to be forever associated with one cartridge—the .30/30. As with “deer rifle,” if you say “thirty-thirty,” you’re automatically talking about a Model 94. (Second place probably goes to the moribund .32 Special.) The Model 336 has been chambered for the .30/30 from its inception, but I think the most popular round for this rifle is the .35 Remington, which has more punch and which I think is the better cartridge.

The sights on both rifles are thoroughly wretched. They stem from an earlier time when hunters didn’t expect better than 4 MoA from a bolt gun and God knows what from a lever.

Accuracy of the Winchester 94 vs. Marlin 336

I think it’s in the matter of accuracy where the 336 most surpasses the 94. John Browning designed the latter to provide half a dozen or so quick, reliable shots at a range that was too far for a revolver, and that was it. On the other hand, some Marlins will really shoot.

In the early 1950s, Marlin discarded the ancient single-hook rifling cutter that it had used to that date. (The legendary barrel maker Harry Pope used this device, and boasted that it cut so slowly that all he got with each pass was a little dirty oil. This was fine for someone who made expensive match barrels, but for a modern factory it was absurd.) They replaced it with a carbide “button” that was hauled through the barrel once, left 8 to 12 shallow grooves, and did the job in a matter of seconds. Micro-Grooving, Marlin called it, and the process not only speeded up production but produced very accurate barrels.

In the 1960s, a gunsmith named Bob Wallack, who worked for Marlin and wrote about firearms, got in an argument with a friend who bemoaned the “inherent inaccuracy” of levers. Not so, said Wallack, who then took the barrel and fore-end off a Model 336, replaced the barrel with a heavy match-grade tube, loaded up some cases with competition bullets, and proceeded to shoot groups that would have done credit to any bolt rifle.

I’ve shot two Model 1895s (which is the 336 on steroids) in .45/70 which were authentic MoA rifles. If that’s “inherent inaccuracy,” I will hunt with it quite happily.

Do you want to own a 94 or a 336? That depends. They’re essentially deer guns, although they’ve killed much bigger game. They’re almost maintenance free and can soak up fantastic amounts of abuse and neglect and still work. Their recoil is mild and their report will not leave your ears like mine, which is to say, dysfunctional. They’re about as quick to get on target as anything that goes bang. And they are, of course, classics, which is reason enough for some. For many of us, these were Dad’s or Grandpa’s or Great Grandpa’s rifles, and so you may have sentimental reason to take into consideration.

The problem is this: Both rifles have been around forever, and their quality varies wildly. Marlin made good rifles until Remington’s former owners got hold of it. Winchester, however, turned out some truly horrible Model 94s. In addition, both companies blighted their designs with idiotic hammer-blocking safeties which are to be avoided at all costs.

If it were my money, I’d look for either rifle in a 1950s vintage. The quality of manufacture was still there, and the wretched safety lay in the future. There are good working guns out there for relatively little money. If you want a really splendid specimen, on the other hand, you’re going to have to spend a really splendid amount of money for it, and this goes especially for the Model 94. Or you can get a battered wreck that’s mechanically sound and give it to a gunsmith for refurbishing. Just make sure you pick someone who is familiar with rifles of that age and knows what they should look like.

Which one would I buy? Which lever-action wins? As a practical hunting rifle, especially for today’s hunters, the Marlin has always gotten the nod from me. The ease of adding a scope, the ability to improve the trigger, and the superior accuracy make it an easy choice on one hand. On the other, I’m not about to argue with the millions who gush over their 94s. I understand.

In either case, I’d make one concession to the 21st century. Remove the iron sights (don’t throw them away) and replace them with a fiber-optic front and a ghost ring rear peep. This combination beats the invisible brass bead front and semi-buckhorn rear all to hell.

Don’t sell these old rifles short. Seven and a half million of one and six million of the other? Somebody knew something.