The 5 Worst Hunting Rifles Ever Made

Unreliable, poorly designed, and downright dangerous, these are some of the worst guns to ever hit the woods 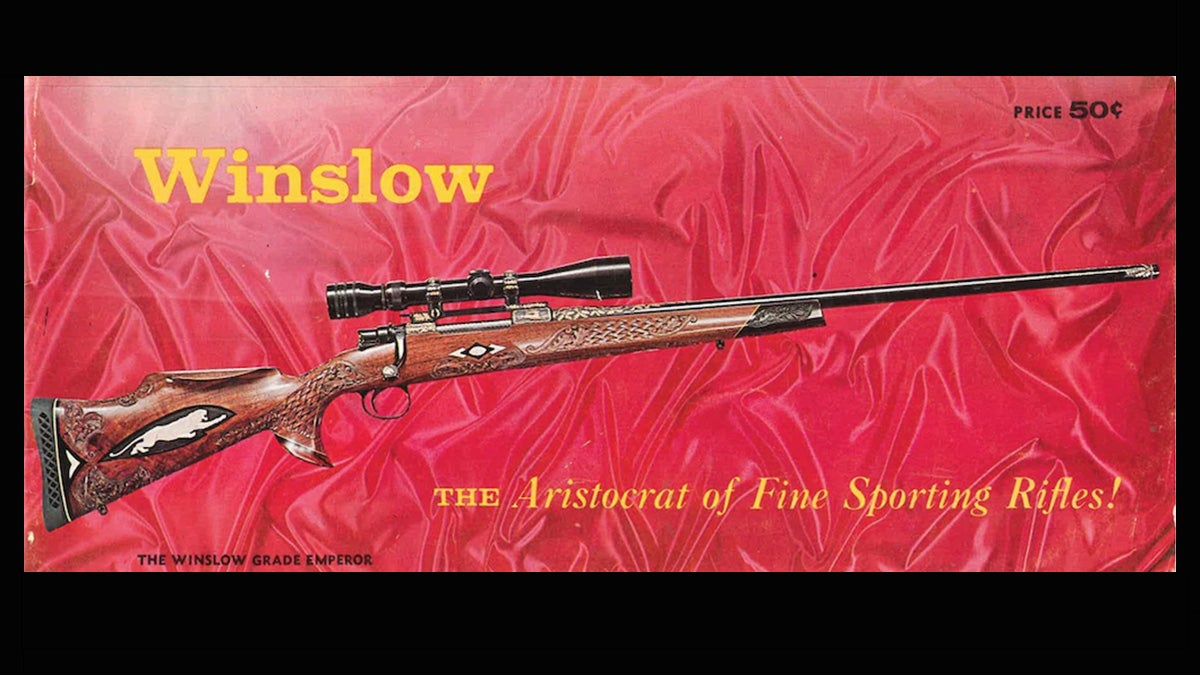 Father Flanagan, who founded Boy’s Town, famously said that there’s no such thing as a bad boy. I, who have not founded anything, say there’s no such thing as a completely bad rifle. There are some awful dogs out there, but if you look hard enough, you can usually find a smidgen of merit. The following five fit that description perfectly. They were chosen by myself, and my friend and gunsmith John Blauvelt of Milford, Pennsylvania, who has had the misfortune to work on some of them.

This semi-auto made its debut in 1961 when the company was hitting its nadir in quality control. Worn-out machinery and simmering labor troubles doomed anything with a big red W on it. The Model 100 was not spared. It was a handsome rifle, sleek and streamlined, but there were problems.

First on the list was the trigger. It was awful, and there was no way to improve it. Second was accuracy, lack of. There were great slabs of wood gouged out of the stock in order to accommodate the barreled action, and therefore no way to bed the rifle solidly.  I’ve seen one Model 100 that would shoot well, and read of others, but no one ever gives a group size, which I find highly suspicious.

As the rifle wore, you had to keep the rear bedding screw torqued down within an inch of its life (for reasons too complex to go into here), or the bolt would jam when it was nearly closed. In 1990, Winchester announced a recall of Model 100s. It seemed that the firing pins would wear down over time, and could jam and protrude from the firing pin hole, producing slam-fires with the bolt not fully locked. (If this happens, the subsequent seconds are very, very exciting.) The recall lasted, I believe, at least a couple of decades. And, finally, all the Model 100s I know about are very fussy about which ammunition will function through them. The Model 100 was produced until 1973, when it was allowed to die an unmourned death.

From 1963 until 1996, Winslow bolt-actions were produced first in Florida, then in South Carolina. The company used all sorts of actions, but I suspect mostly commercial FN Mausers.  Winslows all had blind magazines, Douglas Premium barrels, and came in three stock styles and six grades. Winslows are the flashiest firearms I’ve ever seen. Their bluing, which incorporated a special cyanide hardening bath, made Colt Royal Blue look like Parkerizing. It was a bottomless, brilliant true black. Their basic stock, the Bushmaster, resembled a scaled-down Weatherby Mark V, but the Plainsmaster, the most extreme, looked like a prop from an old Buck Rogers movie.

Winslow employed a gifted woodworker named Nils O. Hultgren, who did elaborate basketweave carving in lieu of checkering, and superb ivory-on-ebony inlay work. There was also excellent gold-inlay and engraving to be had. An Emperor Grade Winslow, the top of the line, was mesmerizing. Abercrombie & Fitch, on its legendary 7th (gun) floor, used to keep a few full fancy Winslows on display, and they seemed to emit an inner light.

Winslows are fine rifles. They are the best work of some very talented people. They make this list because they’re too heavy, too oddly shaped, too shiny (On the Ungava Peninsula, years ago, I saw a rifle shining from what turned out to be miles away. A caribou could have seen it from much farther.) and now, too valuable. I don’t know of anyone who does this kind of work anymore. They were rather like the last of the Kentucky Rifles—too gaudy to be usable.

The Deerstalker was the idea of Bill Ruger, and debuted in 1961 at just about the time that he was recognized as a designing and marketing genius, a man with an uncanny sense of what the public would buy. And the Deerstalker made a lot of sense. It was a gas-operated semi-auto carbine chambered for the .44 magnum cartridge. It was short, reasonably light, handy, and just about perfect for whitetail hunters.

In 1961, the Deerstalker cost $108, which is pretty close to $1,000 today.  If you got 3-inch groups at 100 yards, that was about as well as it was going to shoot, but for a 100-yard-and-under carbine, this was not a problem. But problems there were. First, Ithaca notified Ruger that it already made a slug gun called the Deerstalker, and to drop the name or else. This was probably an omen.

Worse was to come. If you shot lead bullets in a Deerstalker, the lead would shave in the barrel and block the gas ports. In fact, if you shot anything but jacketed, full-power .44 magnum ammo, the gun would not cycle. Grease from the ammo could accumulate in the tubular magazine (which could not be disassembled and was difficult to clean) and keep it from feeding. And most serious, the trigger group was contained in an aluminum housing which would inevitably crack and could not be repaired.

The Deerstalker remained in production until 1985. It still has fans, however, and if you need parts, you can get them from sources other than Ruger. You can even rebuild one in a tactical version, which would cause Bill Ruger to have a seizure.

This bolt action causes me to seethe with conflicting emotions. It was the first centerfire rifle I ever bought (in 1961) and it did very well for me. In fact, many 340s shot just fine and functioned OK. I came to my rifle because during my blithe college days I did more hunting for woodchucks than I did studying, and I yearned for a centerfire with which to persecute the pasture poodles. I was steered to a Theta Chi who had a lot of guns, among which was a 340 in .222 Remington, and which had a Weaver 4X rimfire scope already on board. And I could afford what he was asking.

The great virtue of the Model 340 was its price. In 1960, a new one, which came in .22 Hornet, .222, or .30/30, sold for $59.95. This was not a rifle that was ashamed of being cheap. Its cheapness shone in every part. Everything was stamped, riveted, unpolished, and assembled with indifference. The rifles were not even serially numbered until 1969. This probably saved a few cents. The 340 practically shrieked “I am cost-cutting run amok.”

The trigger was a horror. The barreled action was held in place only by a barrel band. The receiver was split on the top, and required a side mount (which you hardly ever see anymore). If you weren’t careful when removing the barreled action from the stock, the ejector and its spring would fall out. The detachable magazines were thin-walled and made of pot metal. The extractors were weak and only worked properly on the .30/30s. And on, and on.

The Model 340 was made until 1985, and the odd thing is, it has now become a pretty desirable firearm. You can, with very little trouble, find one going for $500 online, and if you really have a head full of owls, you can spend close to $1,000. Why? I have no idea.

You really have to be old to remember this one. During World War II, Japan issued two bolt-action rifles as their primary infantry arms. One was the Arisaka Type 38 (first issued in 1906) which was a 6.5mm, and its replacement, which was first issued in 1940, was a 7.7mm designated the Type 99. A great many of these rifles, and their carbine versions, came to the United States as war trophies, and eventually, their owners took them down from over the mantle and went hunting with them.

Both rifles had a number of things in common. They were Mauser derivatives, very simple, very unrefined, but reliable to a fault and nearly indestructible. In fact, the Type 38 and the 99 are probably much stronger than anything made today. How strong? In the early 1960s, a gunsmith, wildcatter of note, and writer named P.O. Ackley ran a series of tests on the bolt-actions that were used in World War II, including a Type 38. These tests were to destruction; Ackley kept raising the pressures until the actions failed. He was able to blow up everything except the Type 38. As a last resort, he pounded a steel rod down the barrel, welded it in place, and set off a round. The pressure blew the barrel out of the action, but the action was fine. At this point, Ackley gave up.

Read Next: The 50 Best Guns Ever Made

Most converted Arisakas have simply had the stocks sporterized, while others have had a lot of work done. Many of these guns are sound enough, but there are problems. First, all of them are pretty crude for sporting rifles, and remain so no matter what was done to them. Then there is the odd rotating-knob safety at the rear of the bolt. In use, you push it in and give it a quarter-turn clockwise; to release you do the reverse. However, if they’re worn, some of these safeties will cause the rifle to fire when you release them.

And then there are the “last-ditch” Arisakas. These are all Type 99s that were manufactured in the last days of World War II. They were little more than handles for bayonets, and shortcuts were taken in their production that make them unsafe to fire. Be advised, as they say in the military.