The Hardest-Kicking Rounds of All Time 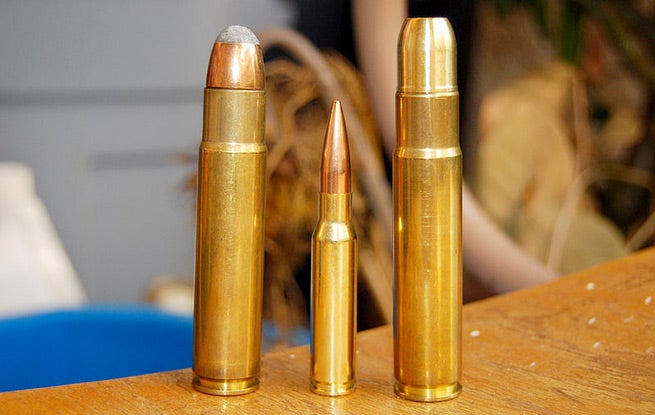 The most recoil I’ve ever taken came from a .577 Nitro Express double rifle. I was invited by Bill Ward, who then ran Griffin & Howe, to test shoot a .577 Jeffrey double at G&H’s little range in the basement of the Abercrombie & Fitch store on Madison Avenue and 46th Street in New York City.

In a 15-pound rifle, which is about what this Jeffrey weighed, the .577 produces 70 foot-pounds of recoil, or about twice the kick of a 375 H&H. Now, as really big rifles go, 70 foot-pounds is not that horrific. Except this rifle doubled—both barrels fired simultaneously, due, no doubt, to a defective sear in one trigger. So, I got 140 foot-pounds in my left shoulder.

Bill Ward, a godless man in whom a love of decency did not abide, suspected the rifle would malfunction and used me as a guinea pig. He is gone now, and I bear him no ill will. The truth is, it wasn’t that bad. It was like trying to block J.J. Watt on the line of scrimmage. You went backward, and had no say in the matter.

In compiling this list, I omitted a few breathtakingly obscure cartridges and limited it to the more famous/infamous. I’ve also skipped over the old lead-bullet/black powder horrors such as the 2-, 4-, and 8-bore double rifles, and will start with cartridges from the modern era. You should get a kick out of this anyway.

I’ve also left out monstrous military cartridges with the exception of the .50 BMG because it’s shot by civilians on a wide basis, and has a legitimate place in the sporting scheme of things.

This spine-snapping number was created in 1993 by the A Square Company, allegedly in response to two PHs who needed more power (what the hell were they hunting?) than was available in other huge rifles. The T-Rex shoots 750-grain bullets at 2,400 fps and churns up over 10,000 foot-pounds of energy. Recoil is 172 foot-pounds.

A-Square, as nearly as I can tell, no longer exists, but when it did, they chambered the T-Rex in a 13-pound bolt action with three mercury recoil reducers in the stock. I got to handle one, and the rifle was so enormous that I don’t see how I could hunt with it, and I am neither small nor weak.

There’s a video on YouTube of some yahoo shooting one of these rifles indoors, and being flung to the floor by the recoil. As I said in a previous piece on the T-Rex, I’d rather take a tusk through the spleen than shoot it.

Introduced by W. J. Jeffrey in 1901, this is a cartridge of extremes. No one shot a .600 as a regular thing. Elephant hunters with discretionary income would keep a .600 in camp and use it only in the direst of emergencies. The recoil was too severe to be endured on a regular basis and the rifles, which had to weigh in the 15- to 16-pound range, had to be carried by gun bearers, and in relays at that.

It fires a 900-grain bullet, and there were originally three loadings of different powers. The most enthusiastic of these gives its monster bullet a velocity of 2,050 fps and a muzzle energy of 8,400 foot-pounds. To put this in perspective, the .375 H&H, which is a stern kicker, puts out about 35 foot-pounds of recoil. The .600 will kiss your shoulder with 103.

Very few .600s were made. The total is probably 100, or fewer. But until the advent of the .700 Holland & Holland cartridge in 1980, it was the most powerful commercial round available. In 1970, Holland & Holland built what they advertised as the “last .600 that will ever be produced.” But an American enthusiast wanted a Great Big H&H, and so he talked them into designing and creating a .700 H&H, so that they would not break their word. But demand for the .600 increased steadily, and now Holland & Holland is making them once more.

I hunted with an old-time PH named John Knowles who used a .460 as his backup rifle and he swore that it was the only firearm that would absolutely, positively stop anything dead under any conditions, all the time. John broke .460 stocks on a regular basis. When I hunted with him, his stock was held together by Land Rover door bolts and epoxy. His regular clients used to bring him Weatherby stocks.

Field & Stream’s Warren Page may have been the first hunter to kill an elephant with a .460. Warren told me that, out of curiosity, he fired his first shot high in the pachyderm’s forehead, which is nothing but bone. The impact was so enormous that it knocked the poor old jumbo crosseyed. The elephant sagged against a tree, and after a few minutes shook his head and charged. This time, Warren shot him in the brain and that was that.

Shortly after the .460 Weatherby appeared, the rifle-making firm of Atkinson & Marquart, a builder of high-grade rifles in Prescott, Ariz., developed this beast. It is considerably more powerful than the .460, and never made it to the ranks of commercial cartridges.

Messrs. Atkinson & Marquart necked up the Weatherby from .45 to .47, which allowed it to take 600-grain bullets and fire them at 2,500 fps with 8,040 foot-pounds of energy. Recoil was over 100 foot-pounds. Very few of these guns were made. I saw only one, which had been stocked by Griffin & Howe, who had considerable experience building heavy rifles. With the very first pull of the trigger, the dreadful recoil split the stock as neatly as an axe.

I know three people personally who have fired the .700, all of them are highly experienced with heavy rifles, and all assure me that the gun is uncontrollable; you fire a shot and find the butt down by your hip and the muzzles pointing at the sky.

If this doesn’t deter you, you can order a .700 from Holland & Holland. It will take several years, and the price, now, is a quarter of a million dollars. And then, when you take it to Africa and go to the airport, you will get to watch the TSA goon yank it out of its oak and leather case and drop it on the floor.

John Browning’s monster cartridge (It looks like a giant .30/06.) and the M2 heavy machine gun that fires it are one of the most successful military weapons in modern history. Both were designed toward the end of World War I, and both have been used in every conceivable application since then. The cartridge was designed both as anti-personnel and anti-materiel, meaning that you could annihilate both a truck and its driver, or an airplane and its pilot, or a fortification and its cowering inhabitants.

There are multiple .50 BMG loads, but for our purposes, let us reflect on the standard loading, the Lake City M33, which shoots a 660-grain bullet at 2,910 fps, with 12,413 foot-pounds of muzzle energy. Sort of takes your breath away, don’t it?

I can’t give you a realistic number for recoil in terms of foot-pounds. This is because shooting a .50 BMG built as a conventional rifle will probably put you in the hospital, so all the .50s I know about, or have shot (probably half a dozen) weigh 25 to 30 pounds and are fitted with huge clamshell muzzle brakes.

To tell you the truth, I’ve never fired a .50 BMG whose recoil was notable. What you are aware of is the colossal amount of gas that comes right back into your face. It goes up your nose, and into your ears, and stands your hair on end. It’s like a monstrous mechanical fart. Such fun! Thank you, John M. Browning.

Compared to the foregoing arsenal of horrors, the Casull is more like a BB gun. However, they are rifle cartridges, and this is a handgun cartridge. It has a place here not because it’s the most powerful handgun round around, but because its two superiors, the .500 S&W and the .460 S&W, are chambered only in huge, heavy revolvers that are fitted with muzzle brakes at the factory, and are shootable by sane people.

Blessed with five times the recoil of the .45 Long Colt, the Casull fires a 250-grain bullet at 1,900 fps, producing 2,000 foot-pounds of energy. It operates at extremely high pressures for a handgun, which makes matters worse.

Compounding the horror is the fact that a great many Casull revolvers are handguns of standard size and weight, and produce carpal-cracking recoil. It is one of the more unpleasant experiences you can have in this life. I have shot both the .500 S&W and the .460 S&W with no particular trauma, but from where the sun now stands, I will shoot no more Casulls forever.

Some years ago, I saw a young shooter given a .454 to try out. It was a single-action with a 4 ¾-inch barrel. He was not warned about it. At the shot, the gun flew up and the front sight cracked him in the forehead. Blood descended in a curtain, and his Old Mom was on the porch, watching.