How to Build the Ultimate Emergency Fishing Kit 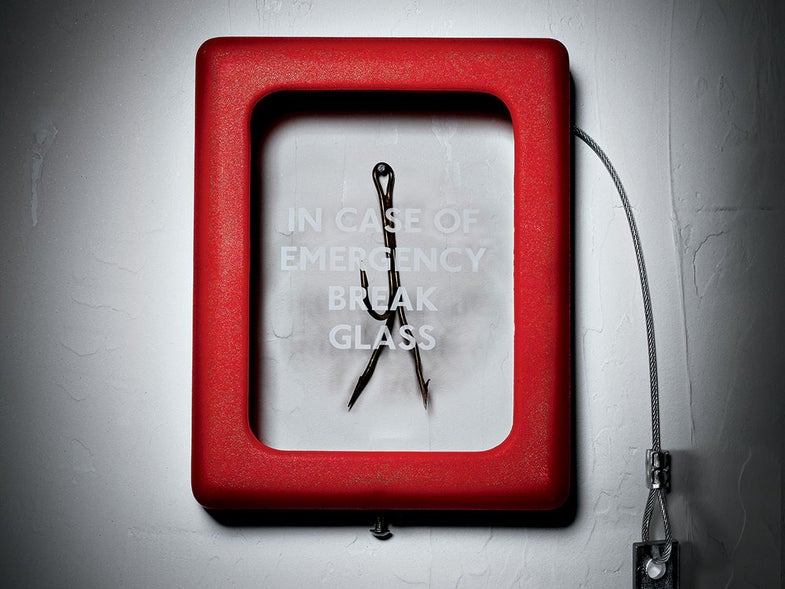 Al McClane, my boyhood hero and the late fishing editor of F&S, could cast a fly line just by sawing it through his hands and letting ’er rip. Because his daughter was the comeliest thing I’d seen in a photograph, I was determined to learn the trick. I thought, you know, impress the old man and I’d have a chance.

Alas, I never met either McClane or his fair-haired progeny, but I did learn to cast 90 feet of fly line without a rod. It was the first method I thought of when testing this survival fishing kit, but after freezing my hands without a single tug from the trout in the Missouri River, I decided to change tactics. A stab at impaling sculpins with an improvised gig was abandoned, and several hours later I was reduced to praying over a hole in the ice of an upriver reservoir, fishing with a leader wrapped round my forefinger and a thawed-out worm another ice fisherman had recently discarded.

Survival Time, and Fishing’s Not Easy

What had I learned from the exercise so far? For one thing, had this been a real survival situation I would have given up on sushi and started thinking about eating the worm. Survival fishing isn’t as simple as the manuals suggest. 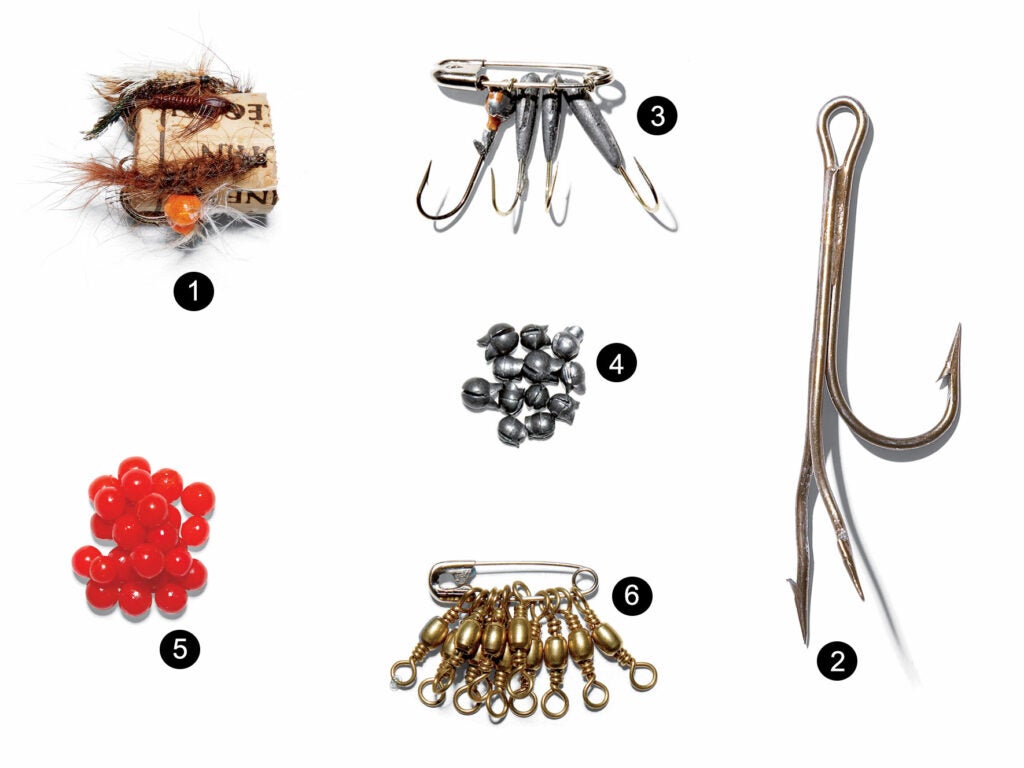 The author keeps these tackle items in his survival fishing kit

I’ve stuck pike with a makeshift gig and caught trout by feeling under cutbanks and grasping them by the gills. I’ve also tomahawked sockeye salmon and trapped spawning suckers by damming up the bay of an alpine lake. (By the way, it’s easiest to trap fish by roiling the water, which brings them near the surface where you can see them but they can’t see you; then use an improvised net to scoop them.) But these attempts were made without hook and line and under ideal conditions—warm weather and productive water.

Another thing to consider is that the rewards of survival fishing must be weighed against energy expended. It took me three hours to chop through a foot of blue ice with a belt knife, during which I sweated like Steve Nash in the fourth quarter of a Phoenix Suns game. Not only did I burn more calories than the small trout I was fishing for would provide me, but I had made myself susceptible to hypothermia.

Let the Gear Fish for You

I still think a survival fishing kit is a good item to carry, but the emphasis should be on gear that fishes while you rest. First choice is a trotline, which consists of a series of hooks attached by short leaders to a main line—the fly line in this kit, which is easier to handle than monofilament. Attach leaders to the fly line with swivels, string them one at a time, and use overhand knots as stoppers to keep the leaders spaced. Tie one end of the main line to a branch and weight the submerged end with a rock. Hide the hooks with natural bait or, if you can’t find any, use scented plastics or salmon eggs.

Most of the other gear in the kit is self-­explanatory, except perhaps for the treble hook, which can be bent and then lashed to a stick with the snare wire to make a gig or gaff. The wire also can be bent into small loops to make rod guides and wrapped at intervals along a willow switch or another limber stick. You’ll find that it is much easier to fish with a cork and worm—or even to fly cast—if your rod is equipped with guides so that you can control the line with your hand. Customize the kit according to conditions. Where I live, the alpine trout are insect eaters, so flies are part of my kit. In winter, you’d want micro jigs to ice-fish.

Which brings me back to my hole in the ice, and the one small rainbow trout I finally managed to catch: I didn’t have to eat that worm after all.

Drink to your health

The Pur Purifier of Water is a water-treatment plant in a powder packet. Just 1 ­teaspoon—which includes time-released chlorine plus a flocculating agent that clumps together dirt particles, metals, and parasites so they can be filtered out with a cloth—will purify 2.5 gallons of water. Why should hunters and anglers consider Pur? It’s lightweight and cheap, just $15 for six powder packets that will treat 15 gallons of water. And unlike some treatments, the powder eliminates all contaminants including bacteria, viruses, and parasitic cysts. It’s an excellent choice for large parties or for sportsmen who need to treat dirty water that would quickly clog the pores of traditional water filters.—K.M.