Making Meat: A Step-by-Step Guide to Butchering Your Own Deer 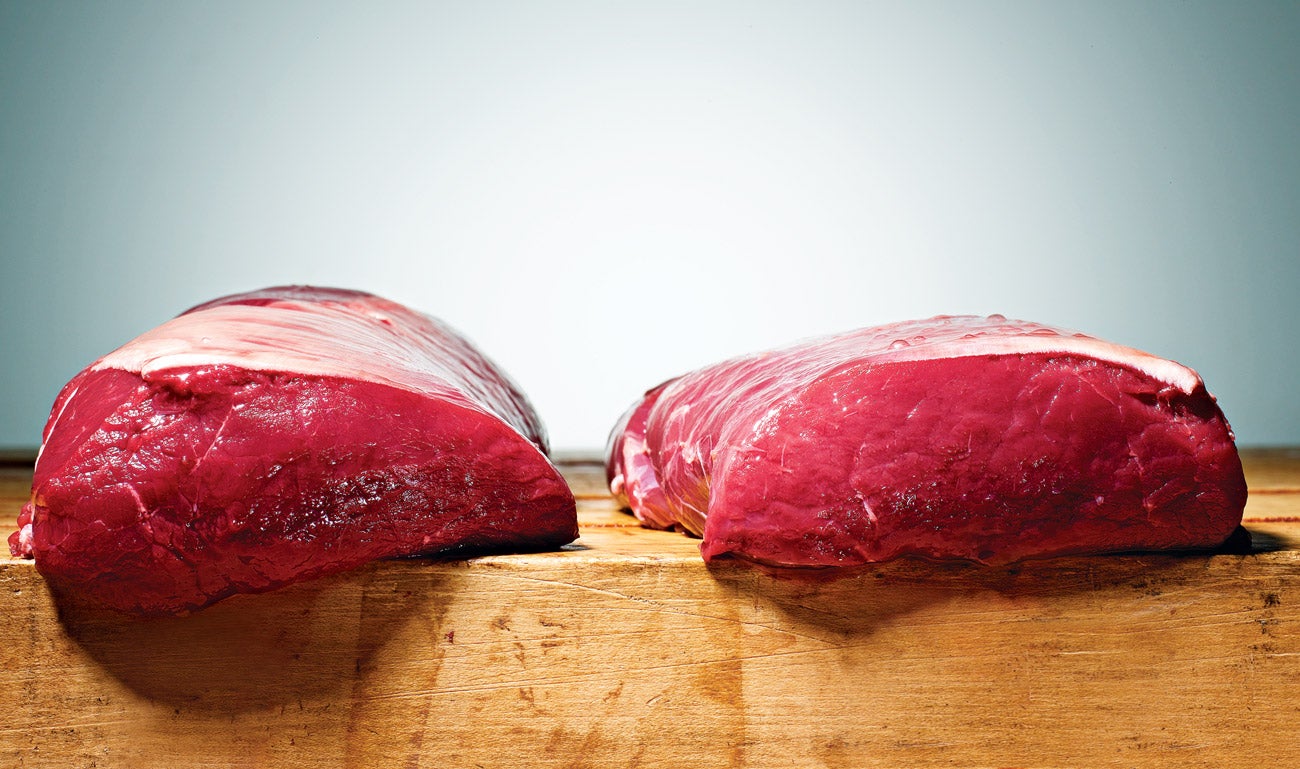 Why be your own butcher? Because the venison will taste so much sweeter. Professional butchers need to profit from their efforts, and that’s fine. But since time is money, most of them can’t afford to put the time and care into the job that you can to get the absolute best-tasting meat.

Besides, if field dressing is the last thing you do with a deer before the butcher hands you a box of white packages, you’re missing out on something: If you butcher the deer yourself, if you see the process all the way through—from lacing your boots to taking a forkful of venison—you’ll truly learn where your meat comes from. And it’ll be the best venison you’ve ever had.

How to Skin Your Deer

I hang my deer head-down from a gambrel for cooling and aging, which keeps the blood from draining into the best meat. And because I can’t think of a good reason to turn the thing around, I skin it that way, too, using these steps:

Step 1: Lower the carcass so the hams are roughly eye level and the head is touching the ground, which helps keep the critter from swinging as you work.

Step 2: Starting at the groin, slip your knife’s point under the skin, blade up, and cut a long slit up from the bottom of one ham past the knee. Repeat on the other side. (I don’t worry about hair on the meat during the skinning process. I rinse the meat and pat it dry after boning it out and before trimming it.)

Step 3: Loosen the skin around each knee and cut all the way around each joint. Grab and peel the skin off the back legs and down to the tail.

Step 4: Sever the tailbone and then keep peeling all the way down to the front shoulders, using your knife when necessary to help free the skin.

Step 5: Cut the front legs off at the knee. (Sharp lopping shears are handy for this.)

Step 6: Starting at the chest opening, slip your knife under the skin and cut a long slit along the inside of each front leg to the severed end. Peel the skin off the legs, then over the shoulders, then all the way down to the base of the neck, using your knife as necessary.

Step 7: Slice through the meat of the neck with a knife, and cut through the spine with a saw.

Many processors offer bone-in cuts, but most do-it-yourselfers totally debone their meat. Here’s what works for me:

Step 2: Detach the front legs: Grab a shank, pull it slightly away from the body, and start slicing between the leg and the rib cage. Continue cutting around the leg, eventually between the shoulder blade and the back. If your knife is sharp, you’ll be shocked at how little attaches the front leg to the body. Repeat on the other side, and set both front legs aside.

Step 3: Remove neck meat, brisket, and flank and toss into the Good pan. Since this will all be scrap meat, it’s not important that you get it off in one nice piece. Hack it off as best as you can. (I know people who like neck roast. I just don’t know what’s wrong with them.)

Step 5: Take off the shank meat on each hind leg and add to the Good pan. On the rest of the hindquarter, natural seams of silverskin run between large muscles. I find it easiest to first separate these muscles as much as possible by working wetted fingers into the seams. Then just cut the muscles off the bone to get clean, largely seamless hunks of meat, all of which goes in the Best pan.

Step 6: Cut the shank meat from the front legs and toss into the Good pan. The upper portion of each front shoulder does have some reasonably ­sinew-​free meat that can be used for roasts or even steaks—just not very good roasts or steaks. I put this, as well as any remaining edible meat on the carcass, into the Good pan and use the best of it for stew meat and jerky.

Trimming (and Not Steaking) Your Meat

Deer fat tastes nasty. That’s why trimming is the most important step in this entire process. It can spell the difference between sweet or sour meat. When the trimming is done, many folks steak their best cuts. Don’t do this. Instead, try this routine:

Step 1: Sharpen your fillet knife. Grab the Good pan, and take any piece of meat and assess it. It’s O.K. to have some silverskin and a small amount of fat in what will become burger or sausage. But you want very little to none in your jerky and stew meat. So if the piece you’re holding can be easily trimmed into a small hunk of clean, lean meat, trim it and toss it into a pile designated for jerky or stew. If not, trim the fat as best you can (don’t worry about the silverskin) and toss it into a second pile for burger and sausage.

Step 2: Now take your Best cuts and trim every last bit of fat from each. If you expect your venison to be in the freezer for longer than six months, leave the silverskin for now and trim it later, as it can help protect the meat from freezer burn. Otherwise, take it off.

Step 3: Cutting the backstrap and parts of the hindquarter into steaks now limits how you can prepare the meat later. Instead, cut the backstraps into 10- to 12-inch-long sections, leave the individual muscles and muscle groups of the hindquarter whole, and freeze it all like that. When you take a package out to thaw and cook, you’ll still have the option of making 1⁄4-inch-thick medallions, 1-inch-thick steaks, 5-inch-thick fillets, or whole dry roasts.

Bonus Tips for a Better Burger

Venison burger can be dry and bitter or moist and delicious. The difference is a phone call. You’re going to do a careful job of trimming fat, and that will go a long way. But you should also call your local butcher (or the meat counter at the grocery store) and ask them to set aside some beef fat. Unlike venison fat, beef fat is sweet. Unlike pork fat, it doesn’t prevent you from cooking your burger medium-rare. Grind in roughly 1 pound of beef fat per 10 pounds of meat, depending on how lean you like your burger. —D.H.

RELATED: A New Way to Cut a Duck

The Tools You’ll Need to Butcher Your Own Deer

Turning a deer into venison is a big job. naturally, it requires a few tools.

Hand grinders work. So do hand drills and hand butter churns. It’s just a question of how you want to spend your time. This inexpensive Cabela’s model has held up well for me after several years of hard use.

If you can’t get a grip on a slick deer hide, it’s because you don’t have this. The Grip & Rip’s teeth bite into the skin and hold it fast so you can really rip—a big help.

I like a skinning knife with a big handle and a small, maneuverable blade.

This will be your primary butchering knife. You want one with a handle that doesn’t get slick amid blood and slime. I like the blade to have some flex.

As a bone saw, it is not quite the best. But as a bone saw that doubles as a wood saw for trimming shooting lanes and also folds up and fits in your backpack, well…

How Not to Field Dress and Butcher a Deer

I am just back from a weekend hunt at the farm of my friend, Steve Burnett, in Bovina, N.Y. There were four other men present, all of whom I’ve had the pleasure of meeting before at the Campfire Club: Shawn Orbanic, Lincoln (Linc) Lyman, John Hayes, and Avery Stirratt. Avery killed a small doe on Friday before I showed up, and I got another doe, ever so slightly larger and from the same stand, on Saturday afternoon.

I field dress deer the same way I pack, which is to say, as if it’s the first time I’ve ever had to tackle that task in my life. It took me a ridiculous amount of time to get the windpipe out, to tie one leg with cold fingers to a bush to open the pelvis, to cut around the anus, and to slide the guts out more or less in one piece. I did not use the miraculous Butt Out tool, which has never worked for me. I did, however, get the insides out without rupturing the bladder, which was a first. I have no idea how I did this. I do suspect it will never happen again.

There are countless videos on YouTube showing hunters wearing white gloves field dressing deer in 12 seconds, after which the gloves are still white. Please do not refer me to any of them. Please do not share with me the way that you personally clean deer, which is almost certainly one from which everyone else could learn. I’m obviously defensive about my lack of skill, but it’s also possible that I enjoy inventing the process each time. At some level, I mean. Maybe being bad at it is—in my personal and twisted case—also something I enjoy.

If field dressing is difficult, butchering is—both theoretically and in practice—impossible. With the help of Avery and Linc, we did get the doe onto a gambrel and hoisted up a few feet off the floor in Steve’s barn. Remember that the longer you wait, the harder it is to skin the beast. I took care of that chore the same evening. Then I was mentally exhausted and broke for cocktails, dinner, and bed. The next day I spent three hours attempting to reduce the deer down into its major parts and to bone these so the meat would fit in my refrigerator freezer, which is already stocked with ducks, turkey, and fish. My version of butchering involved liberal use of a Sawzall, much profanity, and the unfortunate mutilation of some of the meat. No soup kitchen would think of accepting what I ended up with. If you have tips about this, please send them to David E. Petzal. I heard he’s as bad as I am at butchering.

All in all, it was a great trip. By the time you’re in your 60s, hunters no longer greatly care about who’s the best or worst at things. We no longer have the need to prove anything to anyone. So there’s no pressure. This is kind of nice. I also noticed that five out of the six of us have grown white beards. My take on this is that, like me, the others thought they were doing something original, something other guys weren’t doing. It was funny to think we’d all had exactly the same illusion about being different. It was funny to ponder the gentle fools we’ve all become.