How to Catch Dolphin in the Northeast on Light Tackle 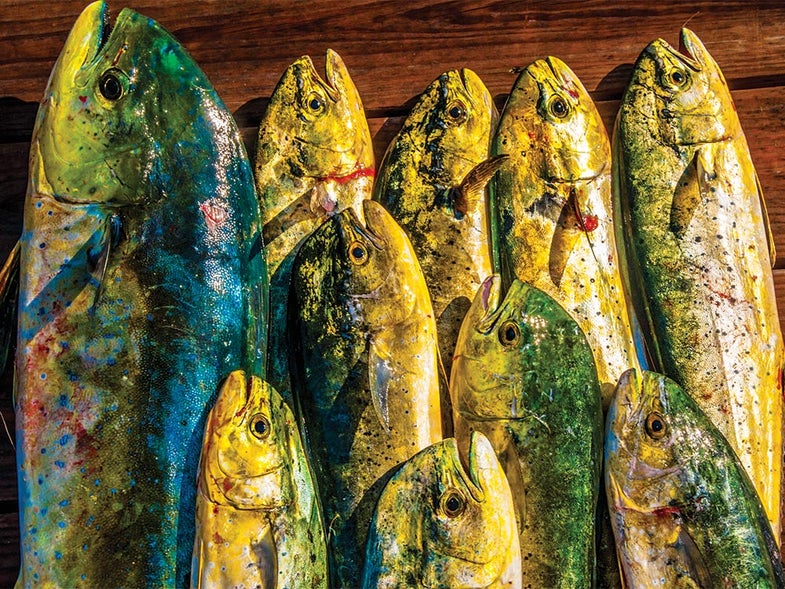 “Dirty pot! This is gonna be the one!”

Capt. Eric Kerber shouted the predication over the humming outboards as he eased his Debra K II toward the lobster pot marker bobbing 100 feet off the bow. The red flag on its tall highflier was wind-tattered. The float at its base and its trailing orange poly ball were brown with algae growth. That meant it hadn’t been hauled in a while. It also meant that, unlike the 10 scum-free markers we’d already hit without a bite, there was a better chance we’d find what we were looking for around this grungy loner. Kerber shifted into neutral so we’d drift in, then climbed up on the gunwale to get a higher vantage point. I sent a popper whizzing past the marker and started to chug. Three sweeps in, and two dolphin—zigzagging streaks of electric green, aqua, and gold—materialized out of nowhere.

They were in competition, both bent on a feed, but the slightly larger fish won, opening a hole in the flat Atlantic as it railed the bait. After the initial twisting air show, it ripped 80 feet of line in an unbroken stream as it sped west. Had it kept going for 40 miles, it would have plowed right into the New Jersey coast, where this summer dolphin chase began.

Made in the Shade

Dolphin—or mahimahi—don’t always get the opportunity to show off their fierce drive. In many cases, they’re a fish that must be picked through on the road to bigger players, like tuna or marlin. Even a 20-plus-pound dolphin’s power won’t fully translate when you hook it on a heavy trolling outfit dragging a skirt 100 feet behind a moving boat. Dolphin were built for light tackle, and they have plenty of fans that use it to target them around the globe. These fish can be found in every ocean except the Arctic, and when you find them, there’s a good chance you did so near some form of shade-producing surface structure. In the Caribbean, that’s often a thick mat of sargasso weed. In the Gulf, it’s an offshore oil rig. We don’t have either of those in the Northeast, but we do have near-endless fields of lobster pot markers.

Not many anglers associate dolphin with the waters from Delaware to Massachusetts, but every summer, as the Gulf Stream pulls warm, blue current north, it hurls piles of them our way. In a good year, you can find dolphin on the pots 20 miles out; other years, you have to run 50 miles or more. But the fish always show up, even if only for a few weeks. I’ve caught Jersey dolphin under floating tree trunks, wood planks, and even Mylar balloons, but those were all just fortunate finds. The more permanent the structure, the more consistently it holds fish, which makes a day of pot hopping like shucking delicious oysters, knowing there’s a good chance you’ll find some pearls. If a marker is holding dolphin, the fish will typically show on the first cast. Sometimes 30 little chickens swarm your jigs. Sometimes a lone 30-pound bull strikes your fly. And when nothing moves at all, you don’t sweat it. You just move to the next pot.

Bolt from the Blue

It’s not so much that dolphin love overhead cover, but rather that it creates a mini ecosystem in an otherwise vast, featureless ocean. Floating structure offers some protection to everything from tiny shrimp to schools of small baitfish. It’s a dolphin Kwik-E-Mart, and you’ll often find them window-shopping from the outside rather than parked right in the snack aisle. This is why it’s critical to keep some distance from a marker. Blasts often come from 20 to 50 feet around it, making a loud topwater perfect for getting the attention of fish in the area fast. Dolphin are also naturally curious, so if there’s an entire school around, you’ll end up with all of them following your lure. If you’ve got some live peanut bunker or ballyhoo chunks to toss out as chum, you can keep them behind the boat until you catch your fill on hooked baits, plugs, soft plastics, or flies. I’ve seen entire coolers filled on one marker after hours of blanks.

The catalyst for Northeast dolphin action is water temperature. If it’s in the high 60s, you’ve got a shot. If it’s above 72 degrees, the likelihood of finding loaded markers increases dramatically. What’s also critical is clarity. Dolphin don’t like dirty water. They want the deep-blue, crystal-clear offshore sauce. For the Northeast fleet, that water is a gift, albeit one we can see coming thanks to the magic of satellite technology. By early July, I’ll be checking the online charts daily, looking for that first push of blue to move over the pot fields. If we’re lucky, it’ll stay there into early October, long enough to drain several bottles of cilantro hot sauce, by which time I’ll be so tired of eating mahi tacos that the first broiled striper of fall will be a welcome change.

You love your high-end cooler. Other people would love to steal your high-end cooler. The rock-solid IronFist and Stiffarm combo from Deny Locks ($150) stops them cold. Available for 20 brands of premium coolers, the system is easy to install: Mount the base to your truck bed, boat deck, or trailer, slide the arm through one of the cooler’s anchor points, lock it, and walk away confident that it’ll be there when you return.