Eventually, goose season has to end. So make the closing day last as long as you can 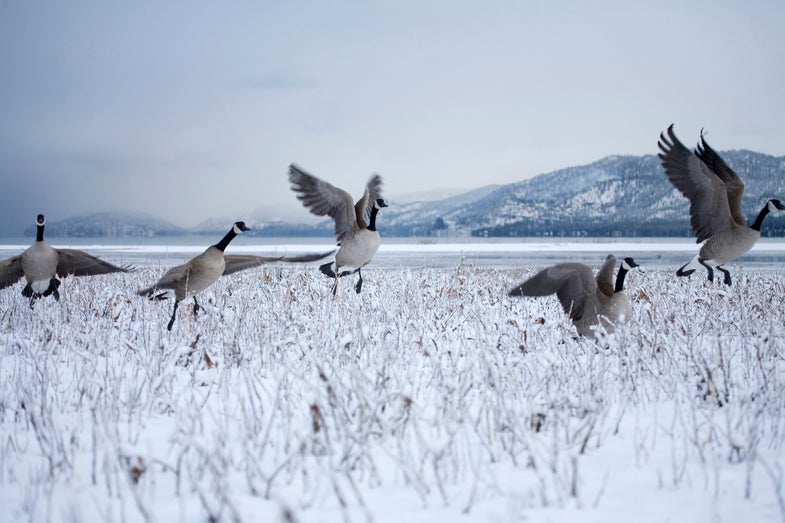 Stick it out to the bitter end and you might just come home with a limit. Cavan Images via Getty Images
SHARE

THERE ARE ALREADY half a dozen geese feeding in the field at 10:30 a.m. when I drive by on my way to ask permission. They’re early. Usually at this time of year, geese eat only once, during the warmest part of the afternoon. “Warmest” is not warm today. We’ve got highs around zero, with a 30 mph northwest wind. At the farmhouse, the landowner looks at me as if I’ve asked to walk out behind the barn and chew on the electric fence: “Go ahead. Nobody else asked to go today.” It figures. Even my normally hardcore friends insisted on staying out of the cold. I can’t. It’s the last day.

Back home, I throw a layout blind and 30 full-bodies into the truck. Some days I’ll wedge every last decoy I can into the bed, but not today. Geese shouldn’t need much enticement to come to a field they’re already coming to. Decoys help draw the birds’ attention away from the blinds too, but there’s only one of me to hide, so I don’t need a big distraction. And did I mention it’s cold? Every decoy I don’t put out is a decoy I won’t have to pick up.

Set Your Goose Spread and Bring the Right Gun

Two hundred geese flush from the field when I return. Some may come back, and more should be on the way. I leave most of the decoy bases in the bags and set all but a few blocks directly on the snow so they look like real Canadas that have landed and flopped belly-down, as geese do on cold days. I set out two main bunches with a gap between for a landing hole. Then, because the geese were scattered in the field when I arrived, I stake a pair and a single downwind by themselves.

The layout blind tucks perfectly into the edge of a grassed terrace. I start shoving handfuls of grass into the straps on the snow cover, but there are geese coming, so I get in, wave the flag a few times, honk, shut the blind doors, and get my hands on my gun. I’ve brought an o/u today because I know it will shoot twice reliably in cold that might make a semi-auto sluggish. Plus, my easily numbed fingers will be able to dunk shells into an o/u’s chamber more readily than they could push against a stiff magazine spring.

Ten geese swing low over the decoys at 15 yards. It’s too easy or I’m too excited, and I make a poor first hit and have to shoot the leader twice. The goose falls outside the decoys, and when I pick it up, I’m thrilled to find that it’s wearing a leg band. I lean into the wind carrying my prize back to the blind.

Be Paitient and Wait For Geese to Set Their Wings

Ten minutes later another flock approaches, skimming low and making for the decoys. There are times to call, and times to shut up. Frankly, if you call like I do, most times are times to shut up, but when geese are coming, even world champions should be quiet. The geese drift off line slightly, and I flip the flag to straighten them out.

The flock beats into the wind in slow motion. At 50 yards the birds look huge, and it’s all I can do not to shoot. I keep it together until they’re backpedaling over the landing hole, so close that I can hear the woofing of their wings. One falls at the shot and the rest flare, except for one that hangs directly over the blind at 10 yards. But I lower the gun. The limit is three, and I’m not ready for this to end.

The last flock, 50 birds strong, works high over the blind at the very edge of gun range, until a lone goose splits off the bunch, sets its wings, and parachutes into the spread—a descent that seems both to take forever and to end too soon. The bird puts on the brakes over the decoys, I shoot, and it falls on its back, feet sticking up, and I can see a band on one leg. This hunt has been so perfect, I’m truly not surprised.

As I’m walking out to get my truck, my friend Tim drives by the field to make sure I haven’t frozen to death. I tell him there’s a gun, flag, and shells in the blind. He hops in my truck and I run him down to the field to hunt. Parking a prudent distance away, I watch through binoculars as he shoots a pair and waves for me to come get him. I put the truck in gear. The season is over. No matter how hard you try to stretch it out, you can’t make the season last forever—but you can savor it right up to the end.

Read Next: Geese on Ice: How to Hunt Honkers In Extremely Cold Weather

Gear Tip: Stand UP and Shoot

Stand-up blinds have been used in Canada for years, but now, finally, Americans are realizing that they work here, too, and are a lot more comfortable than hunting on your back. Avery’s Finisher Panel Blind has a tough steel frame, panel tops for concealment, and large windows with removable camo mesh. At 31.5 pounds, it isn’t light, but it folds to 4 feet by 3 feet by 6 inches for transport. Unfolded, it provides an 8.5-by-4-foot interior that hides four hunters for the price of one layout blind.