Six Ways to Find That Buck You Spooked 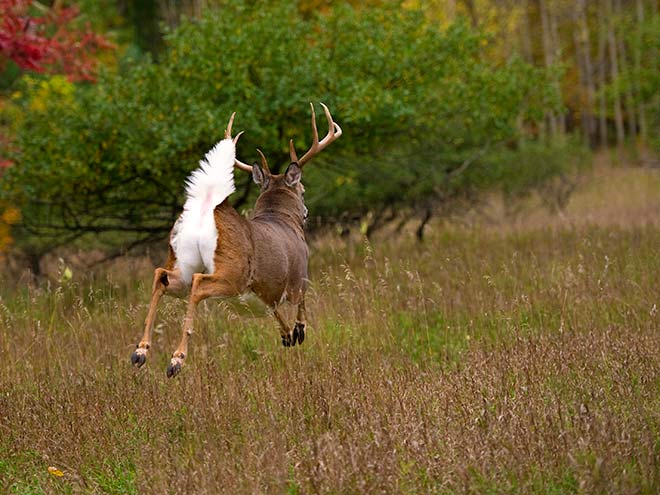 That’s it. It’s all over, I thought. The 4-year-old 10-point buck that I had scouted, photographed, and painstakingly held off hunting until conditions were absolutely perfect was gone…forever, I assumed, when my arrow flew high and he bounded away in a panic.

That’s exactly what many hunters believe, whether they whiff a shot, bump a buck while heading to their stand, or get busted on watch. Sure, you might get a second opportunity on a young deer, but an older buck? Not a chance.

On a crowded public area, that may be true. But in most cases, you shouldn’t be so quick to write off a mature buck that you bump just once. Handle things right and you could get a second chance.

First, consider what happened. How spooked is the buck? A whitetail that just vaguely notices movement or scents you isn’t likely to permanently leave the area or become “unhuntable.” On the other hand, a buck that has three senses alerted—scent, sight, and hearing—is much tougher to get a second crack at. But the situation isn’t hopeless.

How thick was the cover? Deer in open areas may run a half-mile. In dense cover, a buck might only bound 150 yards and hunker down. Analyze exactly where the buck was and what he was doing. Was he traveling, feeding, hooked up with a doe, bedded in thick cover, pushed out by a drive?

Answers to these questions will help you decide how to set up your rematch. Sometimes waiting several days and returning to the same spot is best if that’s the ultimate ambush location. In most cases, a strategic move is called for.

Here are six spooked-buck scenarios and how to deal with them.

1. If you bump a buck while scouting.

You get a free pass here. Even an older whitetail buck bumped during the preseason will not likely alter his movements based on one encounter. Back off quietly and plan your hunting strategy as normal. Only now you have one extra key piece of information—precisely where the buck was at a specific time of day.

2. When you get busted in a transition corridor.

I missed that 10-point in this type of setup. A buck typically uses several routes to get from daytime bedding cover to evening staging areas. Spook him and he probably won’t give this path up entirely. But he’ll likely switch for a while to another hollow, strip of vegetation, or spur ridge. Either wait three or four days and hunt that same spot again if it’s a killer location, or locate a parallel alternate route showing fresh rubs and tracks. It’s how I killed the 10-pointer, three days later and two hollows over.

3. When you blow up a bedding area.

This is a whitetail’s core home area—a spot where he feels safe and secure. Fortunately, most bucks bed in several areas. It’s time to get out your GPS and topographic maps and search for secondary sites. Satellite beds are typically farther back from hunter-access points, smaller, and less obvious than primary bedding spots, often in thicker cover and more rugged, remote terrain. They may be 150 yards or a half-mile from the main site. Find one of these satellite beds to relocate your whitetail buck. But stay out this time. Hunt trails leading from it toward evening staging areas.

Read Next: How to Jumpshoot a Whitetail Buck

4. If you scare a deer off of a food source.

When a particular food source is at its peak, such as freshly emerging oats or a frost-sweetened brassica plot, a buck won’t want to forgo it—even if he’s been spooked on or coming toward it. Look for alternate approaches the deer could take by circling to the opposite side or angling toward a secluded finger he can feed in while staying close to thick cover. Set up there, downwind, but expect a later appearance.

5. If you spook a buck searching for does.

Mature bucks use a circuit of routes when the pre-rut kicks in to seek out estrous does. If you’ve done your homework, you should know of a network of these routes connecting doe bedding areas. They typically take advantage of brushy hollows, weedy ditches, and strips of timber for cover. Spook a buck on one of these and it’s simple to move to another nearby doe-check route. Chances are your testosterone-pumped, bumped buck will simply shift to one of those. (And you’ll also stand the chance of encountering other “travelers” from nearby areas.)

Bump a buck that’s hooked up with an estrous doe, and he won’t leave her. Assuming the doe wasn’t badly spooked, hang tight and use grunts, doe bleats, and light rattling to draw him out of the closest cover. That’s probably where he is, unless you also busted his lady friend. If that happened, move to the next nearest patch of cedars, brambles, or tall grass and call there