How to Have Your All-Time Best Turkey Season

No sleeping in this spring. You’re going to hunt more, hunt smarter, and have the best turkey season of your life. Ready? 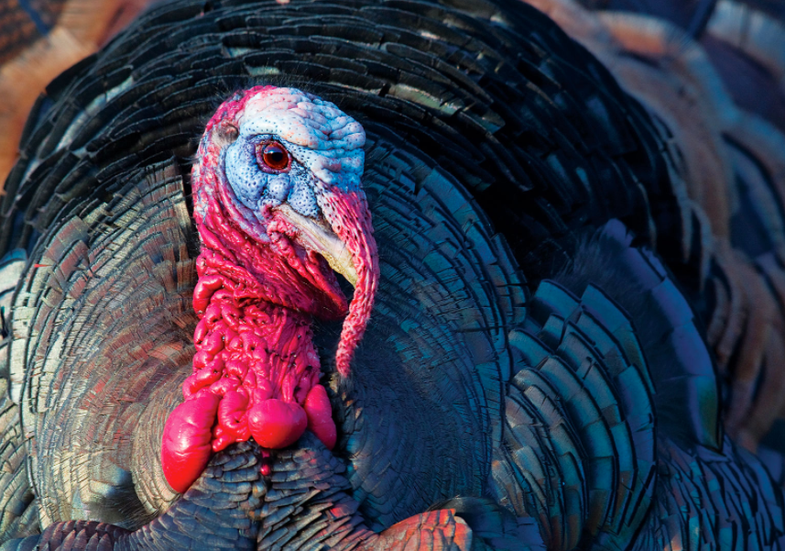 Forget about the fishing rods. You’ve got all summer for that. This is the year for your breakout gobbler season. Novice or expert, doesn’t matter. Now you’re going to take your game to the next level. You’re going to try something totally new. You’re going to have more fun. Maybe all three. By late May, you’ll be bearded and bleary-eyed, questioning your sanity. (Was that a gobble? Wait, I’m in WalMart.) But you’ll be happy, content in the knowledge that you did everything in your power to make this your best turkey season ever. Are you ready? Here’s what to do.

Kill a Western Bird on Your Own 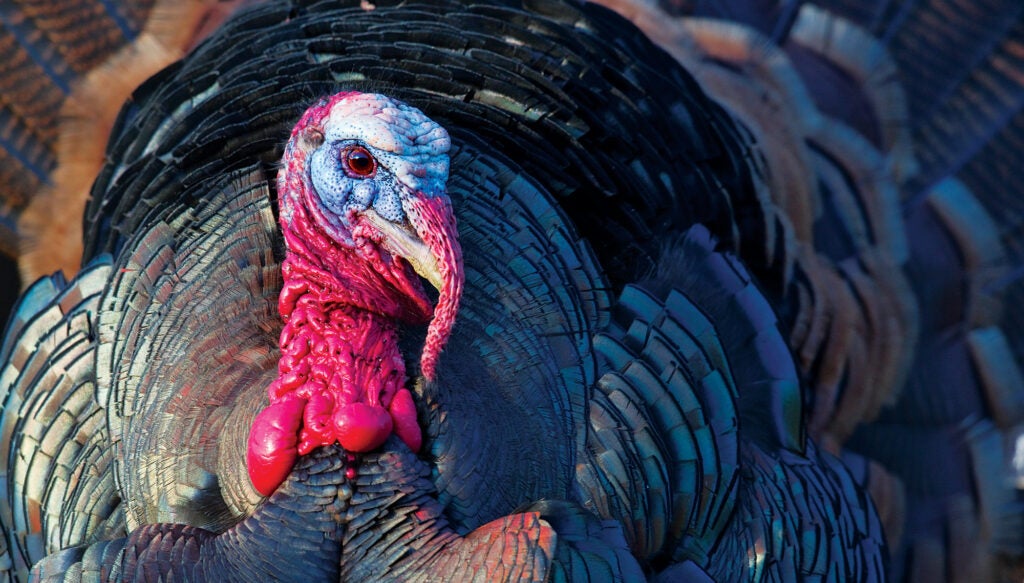 Every few seasons, an eastern hunter might strike a longbeard that runs a quarter mile to his gun barrel. But if that doesn’t happen twice in a weeklong western hunt, something’s wrong. Western turkeys are, in a word, dumber. And they’re often packed shoulder to shoulder on public ground. That got your attention? O.K., here are the three keys to killing one.

1. Just Scout: Out West, you’re either into birds or you’re out. A hundred turkeys will cram into a little cottonwood creekbottom, while miles of identical habitat will be totally birdless. So, plan your D.I.Y. trip with two extra days on the front end for nothing but scouting. To find toms, glassing is the way to go on the prairie, but in timbered terrain, you need to listen for gobbles at dark; western species usually gobble more consistently at fly-up time than Easterns.

2. Call Long Distance: On a South Dakota hunt, I’d just spooked one Merriam’s gobbler but heard another faraway bird. Frustrated, I started in his direction but then decided to check him first with a few loud yelps. He cut me off, and though he was still 300 yards away, he’d closed half the distance. Ten minutes later, he was flopping at my feet. If a Rio or Merriam’s turkey answers you, don’t dally before setting up. These are big-country birds, and they’ll commit to a call from amazingly long distances. Don’t plop instantly into a bad setup, of course, but know that if a western turkey is close enough to answer, he’s close enough to work.

3. Stay Put: If I know an Eastern tom is henned up, I’ll often leave him alone and come back later. But finding turkeys is the heart of the challenge out West. Three miles of prairie may stand between you and the next flock. Stick with the birds you’re on, and if all else fails, ambush them as they return to roost in the evening.

Bonus: Get Your Tag There are outstanding public opportunities for both Rio Grande and Merriam’s gobblers. Some western states require applying for a license in late winter, but the draw odds on turkeys are usually good—and often guaranteed. Rio hunters should look to the Kansas Walk-In Hunting Areas program (620-672-5911). For a Merriam’s, the Black Hills National Forest in South Dakota and Wyoming offers more than a million acres of public hunting. Also consider one of the many Indian reservations in the prairie region of South Dakota (gfp.sd.gov).

Take a Double With a Buddy 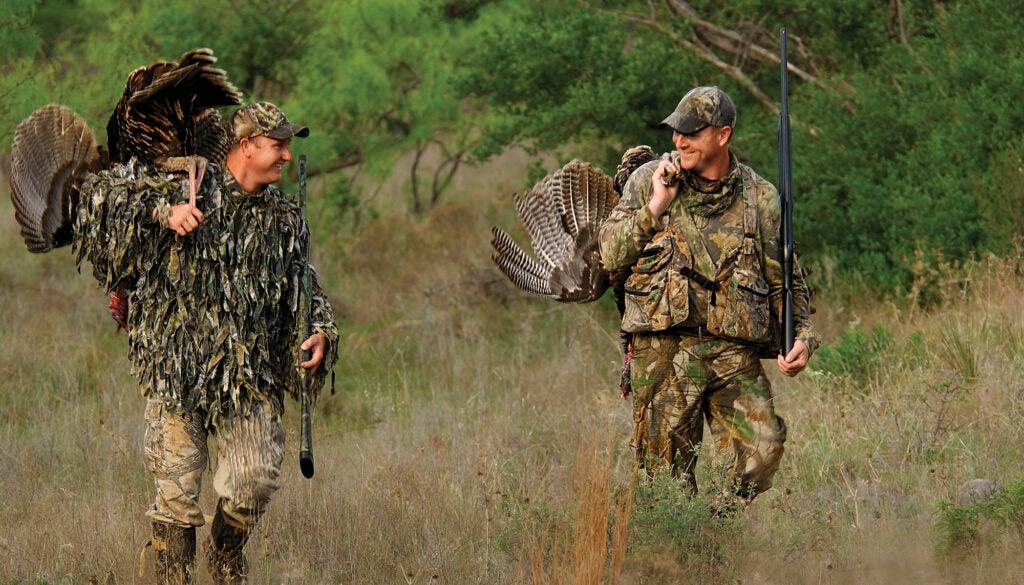 What are friends for? Shooting the other gobbler

At the bar and in the woods, randy young males showing off for females and wanting to fight everyone else tend to make poor decisions. And so, when 2-year-old gobblers gang up in early spring and go on the prowl, you have a golden opportunity to kill a double. Hit the woods with your buddy—or your boss—and use these two tips.

Tip 1: Set Up for Satellites These subordinate toms are roamers. They’ll check every food plot, hardwood ridge, and hayfield in their home turf for hens, and they’ll do plenty of gobbling along the way. Hit likely fields and open ridges, call aggressively, and wait for that string of two or three eager, overlapping gobbles. Set up about 5 yards apart, so each of you has enough room to safely swing a gun, while being close enough to communicate. Stake a hen decoy 25 yards out to grab the attention of the toms and position them perfectly.

Tip 2: Plan the Shots Don’t be shy on the call. Pull these gobblers into the open where they can see your decoy, and odds are they’ll strut right into range. Designate one of you as the first shooter. If it’s you, wait until at least two toms are in easy range and take out the one on your side. (Don’t try the old “1, 2, 3” count; something always goes wrong.) If you’re the second shooter, be prepared to act fast, but don’t rush. Often as not, the turkeys will scatter a bit at the shot but then stand around—and even flog the downed bird—afterward. As long as both of you keep still, there’s usually plenty of time to drop the second bird.

He struts in the same field at the same time every day. He may stare down your hen decoy, but he’s just as likely to completely ignore it. Either way, he’s out of gun range—and getting on your nerves. Here are three ways to put one of his feathers in your cap.

Plan 1: Challenge Him A tom strutting in a field is waiting for hens to come to him. And if he already has hens, he has no reason to come to your fake female way over on the far edge of the field. However, a full-strut gobbler decoy can make his blood boil—and his feet move. Try to get set up on the field before he gets there. Otherwise, belly-crawl far enough into the field that he can see the decoy. Bring your gun and stay hidden behind the fake tom. For safety reasons, be sure there are no other hunters in the area. And be ready to shoot from a prone position. It can happen fast.

Plan 2: Give Him the Ditch Slip If you’re on private land and there’s a drainage ditch or fencerow handy, belly-crawl right up on that bird. Again, you need to know you’re the only hunter around for safety reasons, but stalking works when nothing else will. If you get as far as you can along the ditch or fence but still need to close some distance, try “fanning” him. That is, display a gobbler fan in front of you as you slip within range. It actually works.

Plan 3: Ambush Him Dedicate a full day to just watching the bird and learning where he enters and exits the field. You may have to watch him strut for hours. Think of it as time for your desire to build until tomorrow, when you’ll sit in exactly the right spot and finally put him on the ground.

Some of the best turkey hunters I know refuse to carry a turkey decoy, especially a jake or gobbler fake. Why, they argue, carry something that (a) you don’t need; and that (b) might spook a tom? Because, I would answer, it’s fun to watch a gobbler woo or beat the snot out of a piece of plastic at 12 paces. But I’ll admit there’s something to be said for a minimalist approach, and it’s just cool to get it done without the help of injection molding.

The way you do it is to use the land to your advantage. Look for a setup where you can put the crest of a hill or knoll between you and a gobbling turkey. He knows he can’t see the hen without cresting that hill. You won’t see him coming, either, but when he does pop into view, he’ll be in gun range. And…bang.

Get a Bird With a Bow

Not long ago, sticking a gobbler was a near impossible feat. But pop-up ground blinds and ultrarealistic decoys have made getting your bow bird far more attainable. It isn’t easy, but what in turkey hunting is? You can do this. Here’s how.

Wait Him Out: I’ll admit that I’m not wild about “deer hunting” for turkeys, but manning a pop-up blind in a green field is simply the best way to kill one with a bow. Toms will walk right up to the thing; you don’t have to brush it in or give the birds time to get used to it. Ideally, you’ll have patterned turkeys in a particular field ahead of time. If not, any high-traffic field is a good bet. Just get set up before they arrive.

Use a Good Decoy: You need all the realism you can get to capture a turkey’s attention long enough for a bow shot. Avian-X LCD inflatable decoys (avian-x.com), both hen and jake versions, are expensive and heavy to carry while run-and-gun hunting. But they’re light enough for ground-blind hunting, and outside of a taxidermy decoy, their realism is unmatched. If you’re setting up on a dominant bird, stake a full-strut gobbler decoy with a real turkey fan facing you at 15 yards. A real tom will usually confront a strutter face-to-face, giving you a close shot on a bird that’s looking away. If you’re not sure where your target bird sits in the pecking order, swap the gobbler decoy for a jake and add a fake hen.

Take the Right Shot: Your deer hunting bow will work fine, but consider a wide-cutting mechanical broadhead if you usually shoot fixed blades. A turkey’s vitals are small, and the bigger the cut, the better the odds. Placing the arrow at the top of the bird’s thigh will break bones, hit vital organs, and drop him within sight.