How to Hunt for a Thanksgiving Day Wild Turkey

Hunting turkeys is as fun in the fall as it is in the spring, and you can get holiday feast to boot 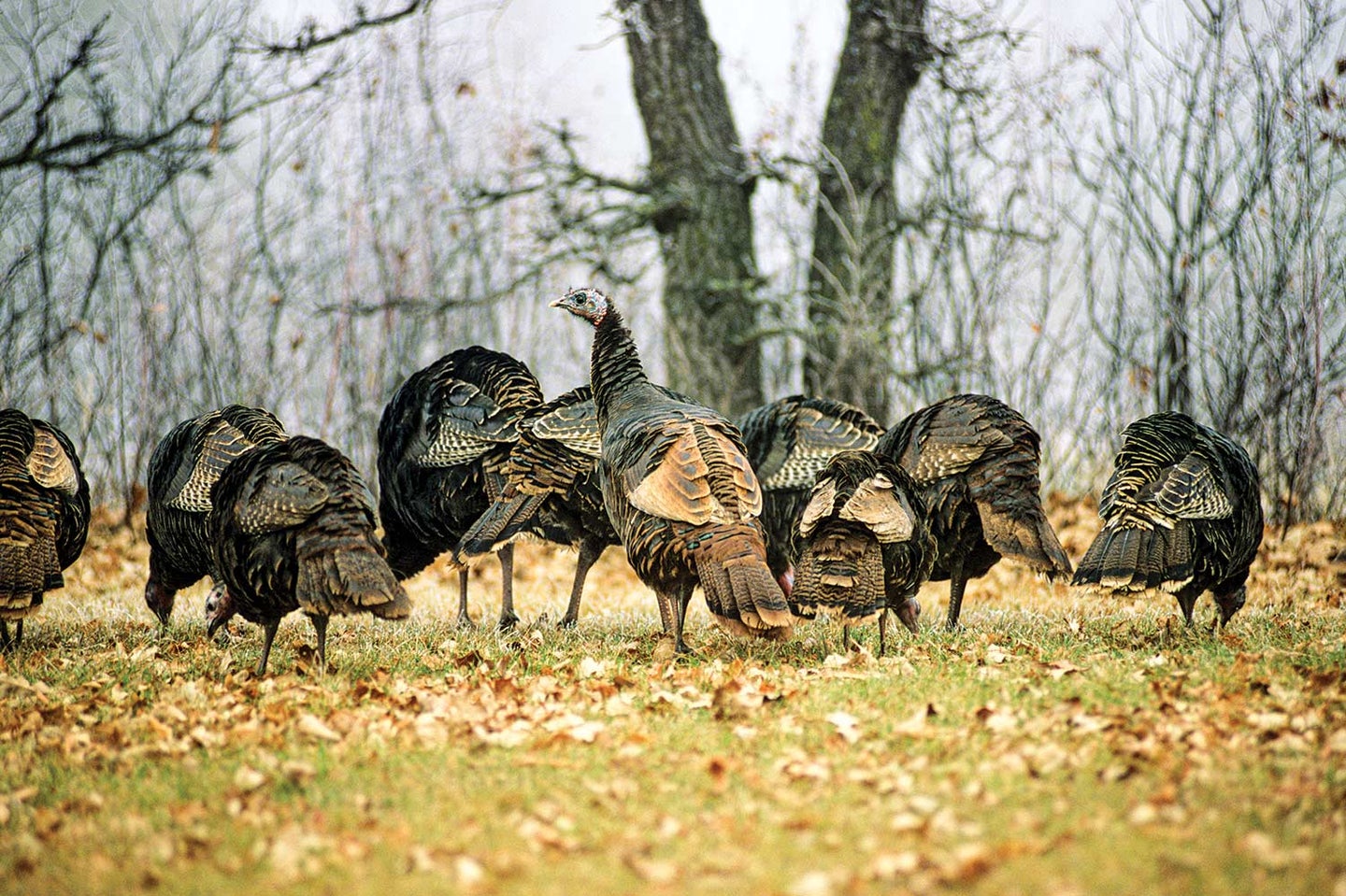 Bob fulcher paid $1,500 for the long-box call in his hands, which is odd considering he built it himself. When a call wins the Grand National NWTF Hunting Call Competition, it’s auctioned off. If the call-maker wants the call, it’s understood that no one else bids. This time somebody didn’t get the memo, and Fulcher really wanted his call back.

Here in the October woods near Coshocton, Ohio, where acorns patter onto the leaves like rain, Fulcher (shade​tree​­callers.​web) scrapes a cluck out of the prize-​­winning call. It’s a beautiful cluck. Maybe even $1,500 worth of beautiful.

The turkeys aren’t impressed or, more likely, are elsewhere, because when “Turkey Bob” talks, turkeys listen. He’s guided hunters to nearly 200 turkeys, though only 30 or 40 have been fall birds. The autumn hunt doesn’t get the attention the spring season gets, and that’s a shame. Fulcher loves fall turkey hunting, and so do I. “Most hunters get into deer mode now,” he says. “To me, November is for deer. October is for turkeys.”

When people ask Turkey Bob how to hunt fall turkeys, he asks them: “How do you hunt in the spring? You call until one answers, right? That works pretty well in the fall.” Flocks of hens and poults are the mainstays of fall hunting. “They communicate a lot with single clucks, so that’s usually what I start with,” Fulcher says. He sets up near roosts and in corridors where turkeys travel, or he walks the logging roads calling until a bird answers. If he gets a low-key response, Fulcher sticks to nonthreatening assembly yelps or the kee kees of a lost bird. But if the turkey sounds agitated, he’ll pick a fight with aggressive yelps. “Turkeys fight to establish pecking order 365 days a year,” he explains. “The hen that’s the boss today may not be the boss tomorrow, but she might be the boss again the day after that.”

Fulcher usually chases hens now because the best wingbone calls come from hen wings, but you certainly can kill fall gobblers, which roam in bachelor groups. “You hunt toms the same way you hunt hens now,” he says, “but you have to make gobbler sounds because they’re not interested in the hens.” Fulcher will make one or two low, coarse clucks on a long box and will sometimes throw in some jake yelps too. “Just make a few calls per hour and be patient,” he says. “The birds aren’t in a hurry to come in now.”

How to Scatter Fall Turkeys

Fulcher is not a fan of the classic scatter-and-recall tactic. As Ray Eye, another non-scatterer, says, “It can be hard to find fall turkeys, so why run them off when you do?”

Because it’s fun, that’s why. You sneak through the woods, looking and listening for turkeys, which can sound like a platoon rustling through the leaves. When they’re close, you sprint at them, screaming, and maybe jack in a shell and shoot in the air too, to bust up the flock.

A good scatter is like a good break in pool. Turkeys carom everywhere. You sit at the scatter site and quickly hear the kee-kee whistle of lost poults. You may hear the lead hen too, making a series of yelps to gather them up. Eventually, the hen will either call the poults out of range, or you’ll be in the midst of a bunch of lost turkeys, one or more of which will come to your kee kees and yelps, and you’ll walk out of the woods with a hen or a tasty 6-pound poult.

Fulcher only breaks up flocks when he’s hunting with friends and their dogs. Otherwise, he’ll start about 100 yards from the roost in the morning and sit for an hour or so, calling sparsely and hoping the turkeys will fly down and come his way. After that, he’s on the move, clucking and listening. “On the right day, I can hear a bird cluck from a quarter of a mile away. If I do, I’ll try to get to within 100 yards, because at that distance it’s hard for them to ignore you.” He’ll end the day back where he started, near the roost, waiting for the birds to come back to bed. “They don’t make a lot of noise late in the day,” he says. “Sometimes I won’t hear them coming until they’re just 50 yards away, but by then you’ve got a great chance to fill your tag.”

Close Call in the Fall

At midmorning, Fulcher’s cluck draws a single cluck in response. We sit. My gun is up and ready while Fulcher carries on a quiet conversation with a hen that sounds like she’s closing—until she doesn’t. We creep and crawl to get closer. Fulcher and the hen talk turkey, and as she clucks through the underbrush, she sounds so close that for two hours I expect to see the bird at any second.

Finally, the clucks fade off in another direction, taking my hopes of an Ohio fall bird with them. As I stand up from the tree I’ve been sitting against, I realize that my heart has been in my mouth and my breathing has been shallow since we first struck the bird, the same way it gets in the spring. Never mind that the prize was half the size of a mature tom, or that instead of rattling the woods with gobbles, our bird replied with timid clucks. Fall hunting is turkey hunting, and the thrill is the same whether the leaves are green or brown.