How to Hunt the Peak of the Squirrel Rut 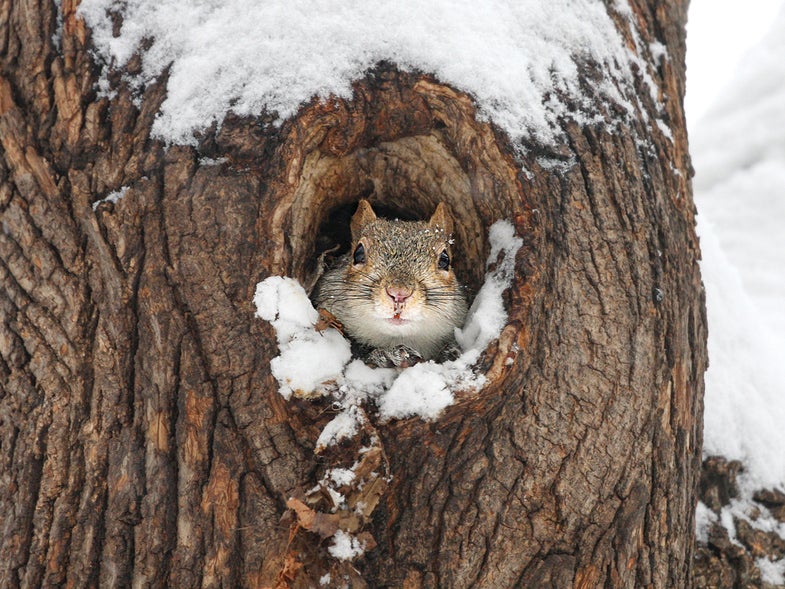 WHEN I WAS A KID, my favorite place to be in winter was on the hardwood ridges behind my neighbor Ronnie’s house, with my .22 rifle in hand. Ronnie loved fried squirrel, and filling his skillet was my fee for accessing the choice woods via his yard. But he was picky. He wouldn’t take old squirrels, and he didn’t put up with sloppy marksmanship. One morning I knocked on his door and proudly showed off a limit of grays—all hit through the body. He turned them down flat. “Head shots only,” he said.

I quickly learned that the winter woods, when squirrels are in a frenzy over making more squirrels, would provide plenty of opportunities for head shots if I was patient. A few mornings later, I knocked on ­Ronnie’s door with six head-shot gray squirrels in hand. He nodded and took them, and my toll was paid. I could keep hunting behind his house.

I don’t know how many hundreds of days I’ve spent squirrel hunting since then. I do know that head-shooting a limit with a rimfire rifle is difficult enough that I’m still quite proud when I can manage to pull it off. I also know there’s no more productive time to try it than on a sunny day in December.

Where and How to Hunt Late-Season Squirrels

Once the hard mast falls to the ground, the squirrels descend from the treetops along with it. Anyone who’s ever sat in a deer stand on a hardwood ridge has seen and heard the chaos firsthand. The same ridges that were covered in squirrels during deer season are fine places to go squirrel hunting in December. Much of the furious work you see while deer hunting is by squirrels storing caches of food that they’ll revisit throughout winter.

Sitting in your stand after deer season with your .22 in hand can definitely work. In fact, it’s downright satisfying to exact hell on all those rodents that sounded too much like Boone and Crockett bucks marching through the leaves.

I prefer to hunt from the ground, though, where I can move. During a good mast year, squirrels will continue foraging and storing food caches for as long as the weather allows. You’re likely to see squirrels on just about any ridge, but late in the season, some spots will have more nuts remaining than others—and that’s where the action will be. I like to slip from one ridge to the next and sit on each for a half hour. If squirrels are around, it won’t be long before you hear or see them.

Why Hunting Squirrels During Winter is a Good Idea

Choosing a good day to hunt is simple. Go when the weather is pleasant. Heavy snow, freezing rain, or sub-20-​degree temperatures are all good reasons not to go squirrel hunting now because chances are, the squirrels will stay in their dens. Calm, sunny days are best. You needn’t wake up before daylight to hunt, either. The best action is usually around midmorning, after the frost burns off.

The Best Rifles For Hunting Squirrels

You can kill plenty of squirrels with a shotgun late in the year—but you’re missing out on a great challenge if you’re not toting a rifle. Dry, fallen leaves and open timber can make stalking close to squirrels foraging on the ground somewhat difficult, but that’s half the fun. Simply move when the squirrel has its head buried in the leaves, or whenever it goes behind a tree. I grew up using saplings for rifle rests, but these days, collapsible Primos Trigger Sticks are tough to beat.

My squirrel rifle is a Marlin 880 SS, and it’s the same bolt-action .22 with the same fixed 4X scope that I’ve been using since I was a kid. I can still hit a squirrel in the head with it at 40 yards. Some hunters use more specialized equipment to shoot from longer ranges. My buddy Ricky King is probably the most dedicated squirrel hunter I know, and he totes a CZ .17 Mach 2 with a high-powered scope. He likes to sit on high ridges and use that rifle to pick off squirrels from 100-plus yards.

Since the objective in this game is to have fun, it doesn’t matter whether you prefer to sneak in close or shoot squirrels from afar. You’re likely to be successful. But if you want the best squirrels for the skillet, my advice is the same as Ronnie’s: Head shots only.