How to Kill Gobblers in Strong Winds

Work around the wind—and with it—to tag a tom 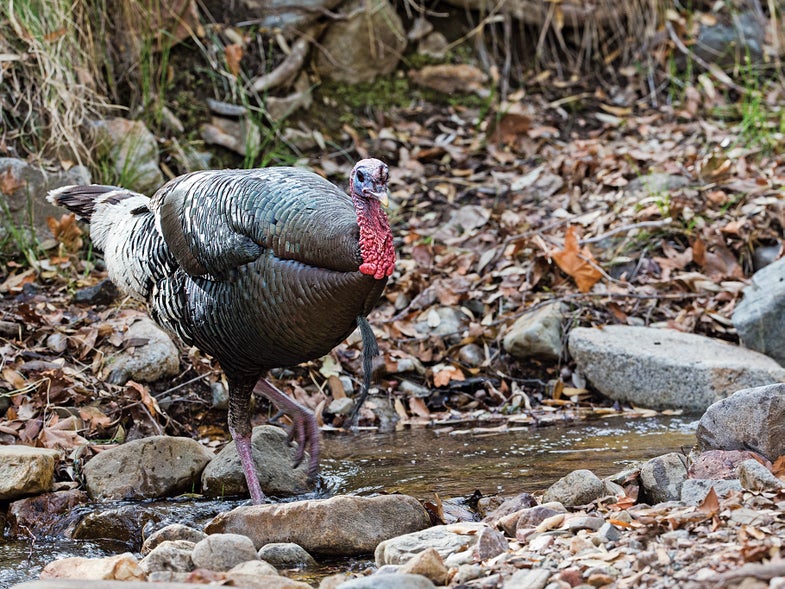 Of all the challenges turkey hunters face, none is more vexing than strong wind. And in spring, blustery days are all too common. When it’s windy, turkeys gobble less. They’re difficult to hear. And it’s harder for them to hear your calls. It also makes birds more nervous and reluctant to approach because they can’t see well with branches and bushes whipping in the wind. But if you adjust where, when, and how you hunt, as well as the calls you use, you can still kill birds in these conditions.

There are actually some bene­fits to a wind: The swaying branches make it harder for gobblers to detect any movement you might make, such as when you adjust your aim on an incoming tom or move closer to a bird before setting up. The tough conditions reduce competition from other hunters. Finally, wind concentrates the quarry.

First, forget the ridges where you may usually hunt. The strong winds there chill the birds and stifle their calls. Toms will drop down at least to the first level of benches, shelves, and flats below the peaks. If the gusts are particularly strong, they may slip down into valleys and open hollows, as long as cover isn’t too thick.

Also check out side bowls and basins sheltered from gusts, leeward sides of hills, and creekbottoms. Fewer flapping branches in these areas allow toms to spot hens more easily, and also be heard and seen better as they gobble and strut. I’ve watched gobblers facing a windy morning sail off the roost and glide a half mile in one flight to reach these protected spots.

Birds will also go to a field of wheat or harvested corn to escape the swaying branches that could shield a predator’s approach. (In this situation, a firmly staked decoy can be deadly.)

Once you’ve narrowed your focus down to these areas, the windy weather challenge suddenly becomes a little bit easier to address.

Often there’s a slight respite in windy conditions right at dawn for 30 to 40 minutes. Try to get on a bird fast during that lull by locating him with an owl hooter or crow call. Move in quickly and work him aggressively before gales build.

Better still, roost a tom the night before at dusk if possible. Realize, however, if gusts build during the night, he may drop down to a tree at a lower ele­vation. Try to predict where that would be—such as the nearest tall scattered pines in a more protected area—and move there quickly if the gobbler isn’t where you roosted him. Call aggressively in order to entice him into range before the breezes build.

If you don’t tag a bird at daylight and winds increase, switch to plan B—cover ground. Since fewer birds are gobbling and they’re harder to hear, you need to eat up territory. Find those birds that are talking. If gobblers are sounding off, work parallel to and downwind of prime areas so you can pinpoint their location and decide where to set up. If the woods are quiet and you’re trying to stimulate birds to sound off, approach from an upwind position so they can hear you best.

Call more often and louder to compensate for the poor acoustics and smaller range you’ll cover. Try to time your calling to coincide with breaks in the breeze. Then walk between spots while it’s blowing, so thrashing shrubbery will help conceal your movement.

You can also use a hearing aid such as a Walker’s Game Ear to help you detect more toms above the roar of wind and clattering branches.

Try clucks and long strings of yelps, but mostly use cutts. A rapid, sharp cutt seems to pierce the air better and also riles up birds that might not have been calling. Box, tube, wingbone, and high-pitched diaphragm calls are best.

I’ve also pinpointed lots of toms with crow, woodpecker, and predator calls when hen calls failed to cut through the wind. Once you locate a bird, then you can move in closer and switch to sweet love talk.

That’s the strategy I used to tag a tom near my house last season on a violently windy day. Oddly enough, I’d tried for him on several gorgeous, calm mornings and been snubbed. The wind changed my tactics.