How to Make High-Stakes Rifle Shots in the Field

How do you make heat-of-the-moment shots in the field? By practicing them in competition 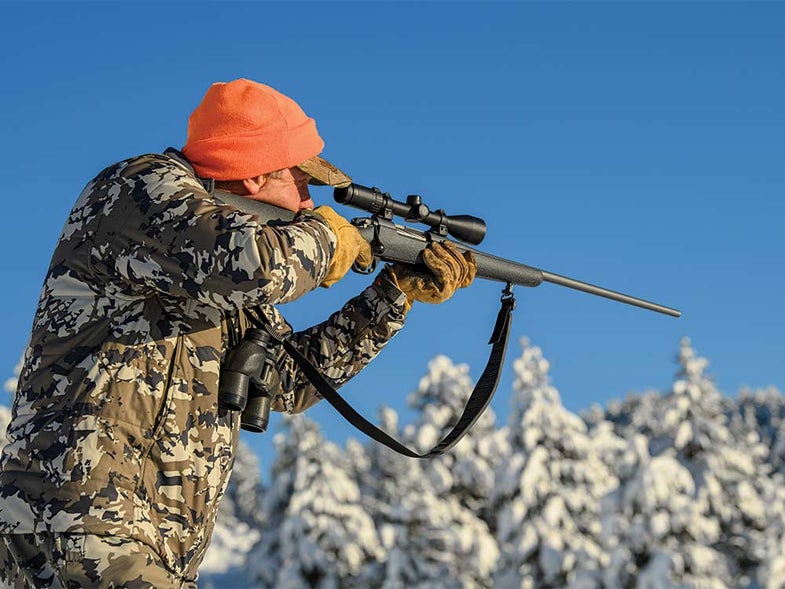 Game Time: A Montana hunter pulls up to take an offhand shot during the rifle elk season.. Bill Buckley
SHARE

“Shooter ready.” Those two words, which I’ve heard countless times at matches, are the last ones a range officer says before the buzzer in his hand emits a harsh metallic squeal, telling you it’s time to start shooting. Technically, “shooter ready” should be posed as a question, but it’s never said that way. It is part of the ritual of competition in 3-Gun and other practical shooting disciplines.

Not Practicing Under Pressure Leads to Poor Shots in the Field

Many hunters are rightfully suspicious of the influence of shooting competitions on hunting. The fascination with so-called “tactical” gizmos and 1,000-yard shots can translate to poor decisions in the field when a live animal is the intended target, not a steel plate. If nothing else, these gear-centric pursuits can lead to a skewed value system, where the shooting overshadows the hunting. My jaw clenches whenever someone describes their hunt primarily in terms of the distance of the shot.

And yet, most hunters would do well to compete. I’ve seen lots of seasoned hunters make basic mistakes in the heat of the moment that have cost them animals or put the issue in doubt—mistakes they’d be less prone to commit if they shot in a handful of matches.

Last fall I was hunting muleys with my friend Paul, who is a veteran outdoorsman. We’d been hiking a series of ridges that spread like fingers off the side of a mountain, scrambling up the brush-choked ravines toward high ground to glass. While moving along one of these fingers, I saw Paul waving me over. He’d spotted a shooter.

The buck was just below us and close, he said. But before I could spot the deer, Paul asked if I could make a 70-yard offhand shot. I could tell he was a little flustered. Yeah, I can make that shot—but this is your deer, I told him.

Paul shouldered his rifle and scanned for the animal while I crouched behind him. He said he couldn’t see the buck well enough and needed to dial up his scope’s magnification. He dismounted the rifle, twisted the scope’s power ring, and tried again. Finally, he shot—and then shot again. I could now see the deer standing in the grass below us, looking our way. Shoot again, I said. Paul did, and the deer fell. It was the only hit out of the trio of rounds my friend put downrange.

With some practice shooting while under pressure and on the clock, my buddy wouldn’t have hesitated to take a 70-yard offhand shot and would have known that narrowing his field of view by dialing up his scope wasn’t the best move. He got lucky with that particular deer.

On a different hunt last fall, during a single-digit cold snap in Montana, another friend had his own near miss on a good whitetail. This buck was a little shy of 300 yards away, walking slowly behind some does that were headed toward a creekbottom filled with alders. They were in the open, but wouldn’t be for long.

We had a tripod with a shooting rest on it and were hunkered down on the side of a sage-covered hill. Precious seconds ticked by as my friend struggled to get the rifle on the rest and the crosshairs on the deer. He emitted small puffs of steam with each breath, and by the time he was ready, he was huffing like a locomotive pulling a string of coal cars up a hill.

The deer vanished into the trees before he could pull the trigger, and we never saw the buck again. I say this was a near miss because had he shot, I doubt the bullet would have found its mark. But like Paul, he could have gotten on the deer and made the shot—with the right practice.

Competitive Shooting Is a Great Way to Hone Your Hunting Skills

Competition can teach us a lot. The primary benefit is that it trains you to handle firearms under stress. The shot timer is a harsh taskmaster. If you fumble with a shooting rest, or don’t realize that a 70-yard offhand shot on a target the size of a deer’s vital zone is a gimme (with practice), you’re going to burn through the two or three minutes you have to shoot the stage long before you engage all the targets. After that happens once or twice, punctuated by the R.O. yelling “time!” as the clock runs out, you’ll find the motivation to figure out a better way.

During a weekend match, it isn’t unusual to put 200 rounds through your rifle—more than most hunters do over the course of several years. A match is an education well worth the investment in time and money, particularly if you note where you struggle and how other shooters succeed.

Certain competitions have “production” divisions in which standard hunting rigs can be used. If that’s not the case, a call to the match director can often result in someone offering to loan or share their gear.

To be effective in competition, a shooter needs a plan for each stage: where you’re going to shoot from, the order in which you engage targets, and how to create a stable firing position. This mind-set pays dividends in the field as well. Before long, it will have you scouting for good shooting positions before you spot an animal and remembering that the best spot might be 20 yards behind you when a buck appears.

Getting started in competitive shooting involves a learning curve, of course. But that’s the point. All of the many mistakes you’ll make in your first matches—and if you’re like me, in every subsequent match as well—are critical lessons learned, where the price you pay is a missed hunk of steel rather than the deer of a lifetime.

Put two rounds in your rifle: one in the magazine and one in the chamber. Start at the low-ready position, muzzle pointed toward the ground. At the go signal (download a shot-timer app to your phone if you don’t have one), raise the gun and fire twice, keeping the rifle mounted and looking through the optic the whole time. When the gun runs dry, toss an extra round into the chamber and fire a third shot. A 10-inch steel plate at 100 yards is a good place to start. You want to go three for three and slowly build your speed.