How to Plan a Red-Hot Wood Duck Shoot 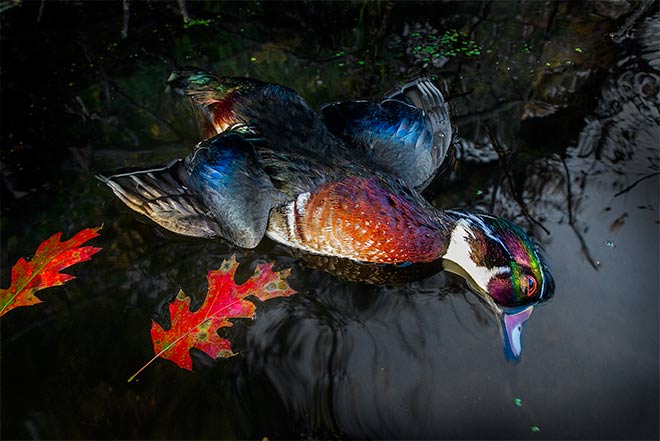 September wood ducks are set in their ways. They know where they want to be, and they plan on getting there early. The morning flight usually won’t last a full hour—but if you’re in the right place, you might see hundreds of ducks in the air. This time of year, woodies are creatures of habit. So long as they have food and security, they will pile into the same hidden, swampy honey holes day after day. If you can crack the code to their daybreak routine, you can pack an entire morning’s worth of action and shooting into 30 intense minutes.

While scouting, dissect the duck hole for the microhabitats that suck in wood ducks. Creek channels below beaver dams are great spots for pass shooting at first light, but have a plan to move quickly into adjacent cover if the action there fizzles. Lily pads and other aquatic plants will trap dropped acorns, especially if there’s a slight current along the edge. The deeper, open water behind a dam also helps congregate food, and decoys here will be readily visible.

Space your decoys each about 5 feet apart along edges between open water and feeding cover. Use just enough blocks to create a couple of loose groups. The first thing alarmed ducks do before flushing is bunch together, so make sure your spread has a relaxed look. Place the farthest decoy 25 yards away from your hide so you can catch birds skirting the spread. Spinning-wing dekes can be wood duck magnets; if you have one, toss it into the mix.

There’s usually plenty of cover to hide you in a wood duck swamp. But avoid setups where you look across the hole to a treeline. In low light, ducks that dip below the trees will disappear against the dark vegetation. Since it can take a critical few seconds for your eyes to adjust when moving back and forth between dark and light areas, be sure to protect your vision: Scan the horizon for ducks, dip your eyes back into the dark trees frequently, and avoid the sun’s glare.

Wood ducks may not circle like mallards, but they will respond to a call. “When birds are in the air, blow we-eat, we-eat into the call with a dragged-out tail on the end,” says Ebbie Hodges, who has built thousands of hand-turned Quack ‘Em Back wood duck calls (843-250-0377) over the last 30 years. A quick, breaking tat-tat-tat-tat-tat can turn ducks that have already passed and make them give your spread a second look.

RELATED: How to Make a Duck Call Out of Spent Shotshells

Be in position and ready 15 minutes before legal shooting begins. If it’s clear, you’ll probably be able to see early birds on the move. Different flocks will frequently use the same flight paths, so adjust accordingly if those early ducks are passing by out of range or avoiding your decoy spread. Get a pocket full of extra shells handy. Set a phone alarm to buzz at the exact minute of legal shooting light in your area, and come out blazing.