How to Pop Tuna on the Surface

Once you pop a tuna on the surface, you’ll be hooked for life 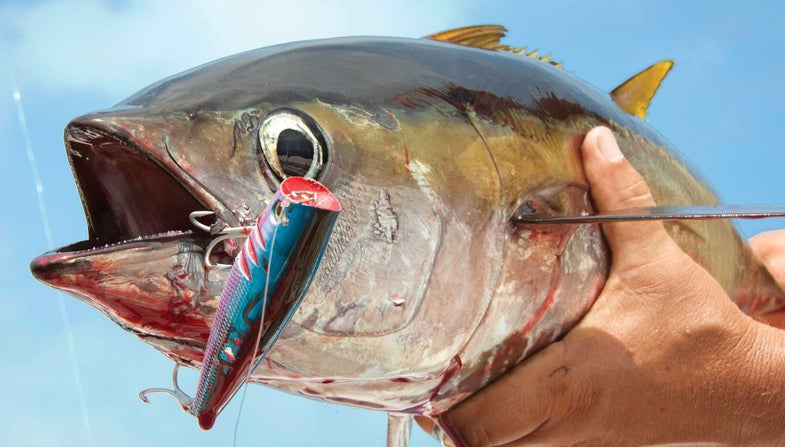 Total boredom. That’s what I was feeling. It was July 2014, 50 miles off the New Jersey coast, and my friends Nick Veneziale and George Berosh and I were listening intently for the unbroken scream of a trolling reel. So far, all we’d heard for nearly six hours was the monotonous drone of the outboards. All day, the sonar showed red tuna marks below the boat—“meatballs,” as they’re often called. These meatballs, however, refused to rise and dine on the multicolored rubber calamari dancing in the prop wash. Considering the cost of fuel, this was looking like an expensive bust. Then, out of the corner of my eye, I saw a 30-pound bluefin roll 100 yards away. Then another. Then in a matter of 30 seconds, an entire school was waking across the surface in front of us.

In seasons past, I’d gotten a couple of cracks at tuna on topwater lures. They were all fleeting and all failures, as the fish never stayed up for more than a few seconds. But this school was different. In the time it took to rip in the trolling lines and reset for casting, the tuna were getting more aggressive, boiling on some unseen forage. As Veneziale nudged the boat into range, my heart was jackhammering in my chest. I silently begged the fish to please stay up. They did, and when my popper hit, I only chugged once before it was sucked under in a vacuum. A quarter of my spool was gone before I could get out, “Holy s - - t, I just popped my first tuna!”

Tuna popping is not a new game. As a young editor at Salt Water Sportsman in 2005, I drooled over stories by writers like Al Ristori who documented tuna popping quests that took them as far as Panama and Australia. I knew that Gulf and Atlantic captains had been doing it for many years, but at that point, and having only ever trolled for tuna, I had yet to see these fish present themselves in a popper-friendly scenario. A top­water tuna eat was something mythic, something reserved for the lucky. Judging by the popularity of tuna popping today, one might assume that luck is easier to come by.

Ten years ago, popping a tuna largely meant leaning on custom rods, specialty reels, and a select few lures that had the strength to stand up to these pelagic tanks. Today, you’ll find dedicated tuna popping sections in tackle shops from Louisiana to Massachusetts. Charter captains who specialize in the tactic abound. Big brands like Shimano, Penn, and Williamson annually churn out new reels, rods, and lures for the task, and you’d be hard pressed to find a tuna boat that doesn’t have a casting outfit or three on hand just in case a surface bite erupts. Berosh’s and Vene­ziale’s boats are perfect examples.

That day in July, I was the only one with a spinning combo capable of handling a bluefin. My buddies were life-long trollers, jiggers, and chunkers, but after they both popped their first tunas shortly after we landed mine, something changed. Within a few days, the guys ordered similar outfits and stocked up on topwater lures. The switch was flipped, and we haven’t left the dock without praying for surface action since.

Follow the right captains on social media and you can be fooled into believing tuna are always up and always eager. That’s just not the reality. While there are more videos of surface tuna action online than ever before, there are also more people doing it. In five more runs after the day I popped my first, I got only two more quick shots that didn’t score. Neither Berosh nor Veneziale popped another tuna the rest of that season. It wasn’t until August of 2015 that we got truly spoiled.

Successful tuna popping is about being in the right place at the perfect time, which is no easy feat in the open ocean. A boat just a mile away can be covered in fish while you bob around in dead water. Unless you get called in, you wouldn’t know what you missed until you saw it on Instagram later. That’s why it’s good to have friends in this game, and it was a good friend that called us in to a yellowfin blitz that spanned a half mile that August morning. To date, it is the only tuna trip I’ve been on where we threw nothing but poppers from start to finish. We chased 15- to 30-pounders around Berosh’s center console until our legs practically gave out. Countless surface explosions stripped the paint off at least a half dozen lures. And we stayed up until 11 p.m. that night cutting and bagging our catch with victory beers in hand.

I got offshore eight times during the 2016 season. I caught fish trolling, but not once did I cast to a boiling tuna, although other locals got on popping bites. When it comes to any offshore fishing, you treat the great days as gifts, knowing you won’t be there for every surface feed every time. In no small way, it’s the need for so many stars to align that makes that blowup so glorious when it finally happens.

Gear Tip: Sure Grip, Your Grip

Whether you’re steaking yellowfins, butterflying yellowtail snappers, or skinning yellow perch, a sharp, comfortable fillet knife you trust is a must. If your old standby has seen better days, Dexter Russell’s new UR‑Cut should become your new best friend. A quick dip in boiling water softens the UR‑Cut’s rubber handle. While the handle is still warm, give it a squeeze to make a mold of your handprint, and you’ve got a fillet knife perfectly customized to your grip after it cools. —J.C.