How to Rattle in Whitetail Deer in the Fall

Follow these tips to call rutting bucks right to your treestand 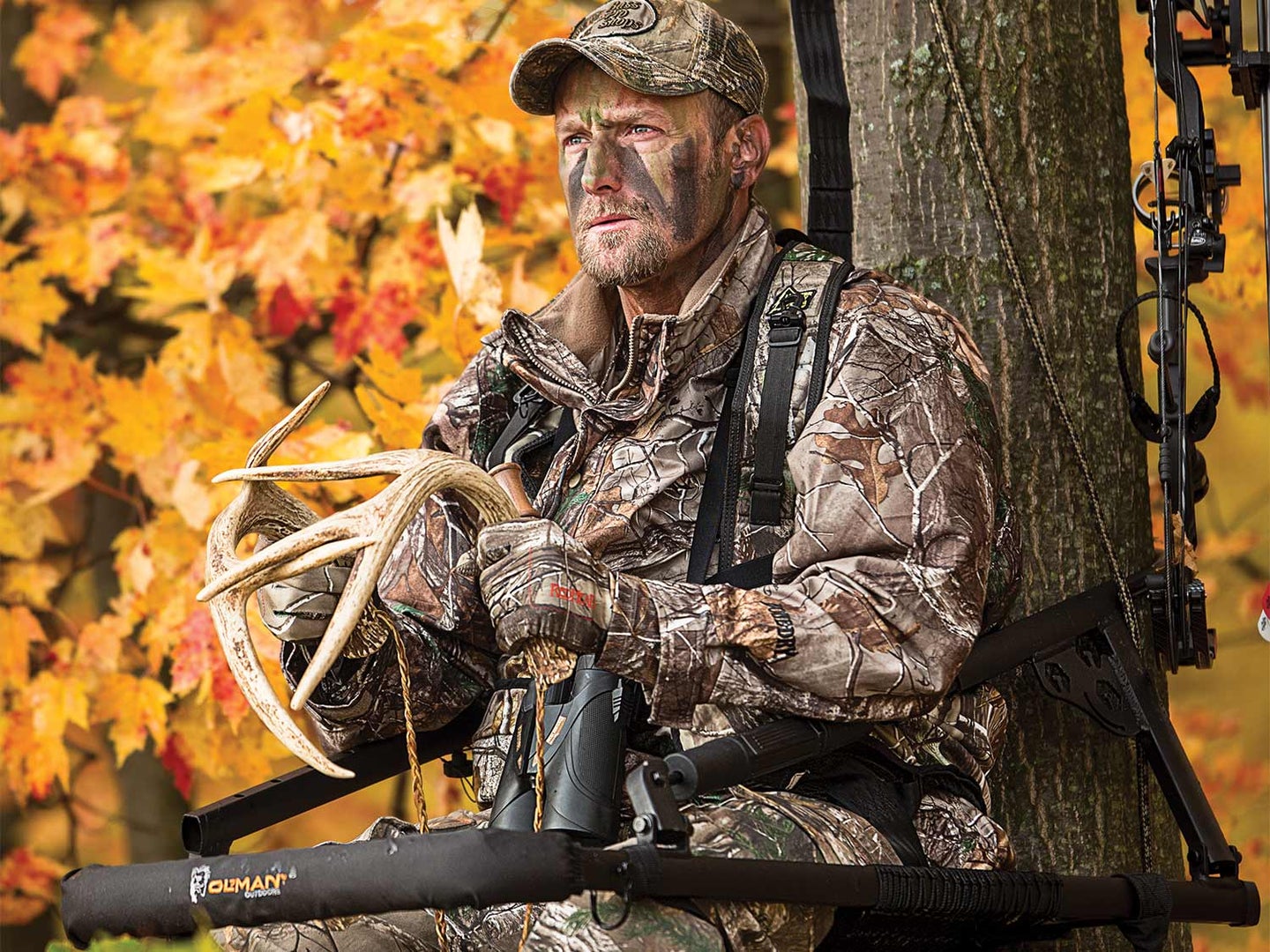 I was in high school the first time I rattled up a buck. My buddy and I were sitting on the edge of a big clover field, watching a little 8-pointer chase two does at the other end. “I’m gonna rattle at him,” I whispered with the clueless confidence of a 16-year-old. I’d watched enough hunting tapes to know how to do it.

Not 30 seconds into crashing a pair of shed antlers together, a Booner-class 13-pointer charged into the field from our right and stood 35 yards away. “Shoot him,” I hissed. And my buddy did, right through the lungs with a muzzleloader bullet. It’s still one of the biggest bucks I’ve ever had in front of me.

The next day, I was thinking about dropping out of school to become a guide. Problem was, I couldn’t seem to make rattling work again. I tried a bunch and kept waiting for another giant to explode out of the shadows. But it never happened. So for years I kept mostly quiet on stand since then—until a few seasons ago.

How to Make the Right Rattling Sound

One October, I was interviewing Georgia big-buck expert Jay Maxwell for a story on late-season deer hunting when we got on a tangent about rattling. Maxwell, who held the nontypical whitetail archery state record and has arrowed 15 P&Y-class bucks, is a big believer in hitting the horns. He says too many hunters fail to rattle up bucks because they don’t try often enough—and because when they do try, they don’t make the right sounds.

Realistic rattling, he told me, ought to sound like a wild hog chewing on a Mountain Dew bottle. Years earlier, he’d listened for more than 20 minutes while a pair of bucks fought unseen in nearby brush. “It was this grinding and popping sound,” he recalled. “There were lots of hogs around that place, and that’s what I thought I was hearing: a pig chewing on a plastic bottle.”

But then the bucks emerged, and Maxwell killed the bigger one. He has remembered that sound ever since and tries to imitate it every time he picks up his rattling antlers.

So I thought about the buck fights I’ve watched and listened to, and I realized they don’t sound like the typical two-minute, crash-and-bang rattling sequence made by most hunters. Except for the occasional staccato pop of tines under pressure, the real fights have been almost silent, especially if the deer were 100 yards or more away from me. Some of them lasted for nearly an hour too.

The Best Times in the Day to Rattle

Later that month, on a cool evening, I put Maxwell’s advice to the test from a ridge overlooking a creek drainage where I know deer like to stage before dark. I grabbed my shed antlers and tried to sound like a pig on a bottle. For 10 minutes I never took the antlers apart. There was the sound of the G2s popping now and again—and then the sound of a deer marching through dry leaves. I grabbed my muzzleloader just in time to see a buck coming through the timber. He was a young 8-pointer that I didn’t want to shoot, so I lowered my gun and picked the antlers back up to see how he’d react to more calling. He finally spooked at 25 yards, and you couldn’t have slapped the smile off my face.

I rattled during every sit over the following three weeks in Kentucky and called up four more small bucks. I ended up killing a nice 10-pointer in early November that strolled by the old-fashioned way, and so I took what I’d learned about rattling on a trip to Kansas.

A couple of hours into my first morning there, I ground the antlers and watched a small 8-pointer come barreling through the creek drainage to the base of my tree, where he had a long sniff at my climbing sticks. Then he stomped off, pissed on his hocks one good time, and made a belch­like grunt as he wandered into the brush.

I hunted daylight to dark for four days in Kansas and rattled up at least one buck on every outing. Although I tried sequences all through the day, every response took place either between 8 and 10 in the morning or during the last hour of light. As many bucks responded 10 minutes into the rattling sequence as within the first minute.

On my last evening, I was sitting in a lock-on stand with a cornfield in front of me and a dry creek bed behind. I watched a good buck step out catty-corner from me on the edge of the field, 100 yards away. I ground the antlers together, and he white-flagged it back into the brush, evidently not a fighter. But I kept rattling, and when I glanced over my shoulder, a stud of an 8-pointer was trotting right to the creek bed, already within range. I managed to get my release on my bowstring—but he caught me shifting my feet and spooked, leaving me shaking in the tree.

I didn’t rattle up and kill a buck that season. But I learned a lot. If you hit the horns often enough, you’ll call in bucks. Most won’t be big, and not all of them will give you a shot. But just like catching a keeper bass on a topwater lure when you could catch three on jigs, rattling gets in your blood. It makes me feel like a 16-year-old again, waiting for a giant to charge out of the shadows.

And sometimes that’s exactly what happens.

Nothing keeps my feet warmer during a cold-weather treestand hunt than a pair of insulated knee boots with neoprene uppers. I’ve tried a bunch of different ones, and the Alpha Agilities from LaCrosse are still my favorites. I’ve got an 800-gram insulated pair that’s perfect when I’m sitting still, but it’s also lightweight and comfortable enough for sneaking around on the ground—which is a good way to rattle if you have a gun in your hand. For early season hunts and general off-season turd-kicking, I have an uninsulated pair that’s almost as light as tennis shoes. As footwear goes, only my Crocs see more action. —W.B.