Young Blood: How to Get Kids Into Hunting

Hunting’s future depends on recruiting youngsters. Here’s how to do it right—and have a blast along the way 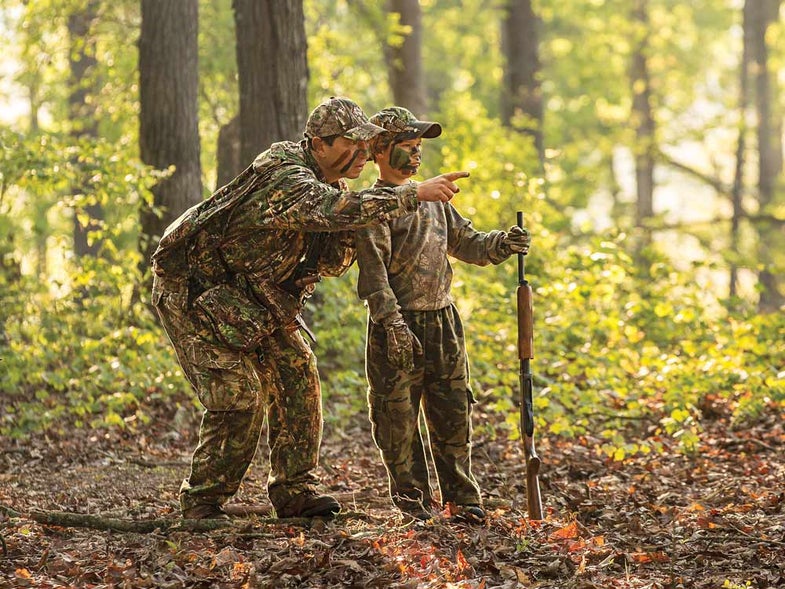 To see the stats, the future looks bleak. More hunters are retiring than are joining our ranks. The next generation of outdoorsmen and women had better be passionate, because there won’t be as many of them to carry the torch.

Still, in many hunting camps, it’s easy to find hope in the eyes of a kid who can’t sleep but for the excitement of opening day. Those early experiences in the woods are critical to the future of hunting. Here’s how you can help make the most of them. —W.B.

Is he ready? The thought had been running through my head for a month, ever since my oldest son, Hunter, told me that he’d like to go turkey hunting. He was 9 years old. Now, we had a fired-up longbeard in the timber below us, every gobble a bit louder than the last. My question was about to be answered.

That hunt was seven years ago, and Hunter shot the turkey at 12 yards. When it was over, both of us were shaking too hard to do anything but grin madly and hug each other.

Since then, all three of my kids—two sons and a daughter—have grown up in the woods hunting everything from squirrels, ducks, doves, and rabbits to whitetails and turkeys. These days, they can all handle themselves without instruction from me. Truthfully, our hunting time together now is more for my benefit than theirs.

So, when is your kid old enough to hunt? Even though some states have minimum age requirements, there is no magic number to determine readiness. My kids all started at different ages. Here are some guidelines and advice to help you decide.

Take Them With You: Short trips to the woods to observe you or help scout will give kids a feel for things. Patience isn’t a trait often found in young kids, so taking them on quick outings before they’re ready to shoot teaches the importance of sitting still and being quiet without putting the outcome of a hunt on the line.

Go Shooting: Marksmanship and firearm safety is just as important as the ability to sit quietly. Begin teaching good shooting habits to kids as soon as they can safely hold a gun. Start shooting with an air rifle or .22 to teach aiming and trigger control, and don’t move up to a centerfire anything until they’ve mastered a firearm with a quiet report and no recoil. Don’t rush this process; until they can confidently and effectively handle a gun without your assistance, they aren’t ready to hunt.

Make Meat: Kids who grow up in the country usually understand the connection between the animals they see and the meat on their table at a young age, but a kid from town may not. It’s important for young hunters to grasp the realities of killing an animal before the moment of truth. —M.P.

The day has finally arrived, and how it goes will largely be up to you. Here are a few things I’ve learned from countless trips afield with young hunters.

It Will Be Short
The excitement of a first hunt will fade quickly if the action is slow. If your kid wants to doze off, let her. And when kids say they are ready to go home, it’s time to leave. Making them stay just ends in frustration for everyone. There will be other hunts.

Don’t Focus on the Result
Most first hunts don’t end with a shot. But if the opportunity does arise, this isn’t the time for being selective. Any legal game is usually a trophy to a beginning hunter. Let them make the decision whether to shoot or not. There will be plenty of time for big bucks later.

Bring the Answers
There will be lots of questions, and that’s a good thing. Questions show interest in what is going on and anticipation for what might come. Be honest. If you don’t know the answer, admit it—but make a plan to find out together later.

Easy on the Blood
When that first successful hunt finally happens, don’t expect your young hunter to jump in on the field dressing. Let him stand back and watch. Use the experience to explain how to do it, why it’s important, and how it makes a difference in transforming the game into a meal. —M.P.

So now you’re in the woods, maybe for the second or even fifth hunt. How do you make sure your kid is still having fun—and learning along the way? These tips have worked for us.

Squirrels: The Gateway Hunt
Show me a kid who can bag a limit of bushytails on a hardwood ridge or in a riverbottom swamp, and I’ll show you a kid who’s ready to hunt about anything. Squirrel hunting teaches kids to identify and locate food sources. Sneaking into gun range while avoiding the animals’ keen eyesight requires stealth and patience. Even experienced hunters can have difficulty locating a squirrel that’s flattened itself against a limb. They’re small targets that require precision marksmanship. And when properly cleaned and prepared, they’re delicious on the table. —M.P.

Make Some Noise
Anyone with kids understands that making noise is their specialty. You can put that to work and keep them occupied at the same time by letting them call game. Grunt tubes and rattling antlers, push-pull turkey calls, and mallard drake whistles are all easily mastered by even the youngest of hunters. Practice beforehand so they have a pretty good idea about what to do in the field, then turn ’em loose. Should the hunt be successful, this will make the experience more memorable. —M.P.

Open the Blinds
Second to squirrels, turkeys are my favorite target for first-time hunters. If simply killing a bird is the goal, there’s nothing wrong with waiting in a ground blind. But many kids would rather get out and walk.

A couple of springs ago, during a two-day youth season, I took my buddy’s 12-year-old son, Jett, after his first gobbler. I’d scouted some strutters in a beanfield corner and set a blind, and we got in there early with decoys. Birds gobbled all around us at daylight, then drifted away. At 9 a.m., Jett was asleep and it was getting hot. I heard a distant gobble and couldn’t stand it. We got out of the blind and went to him.

We didn’t kill that bird but spent the next hour maneuvering and working him. We were turkey hunting. Jett more than proved that he could slip around in the woods and keep still against a tree. I knew if he could do that, we didn’t need the blind.

The next morning, we snuck to within 100 yards of a gobbler hammering on the limb. We called him strutting through the timber right to us, and Jett killed him at 20 steps. Later, he said, “The best part about that was sneaking in, watching him come through the woods, and having to be so still.”

Of course, that’s exactly what I love about turkey hunting too. Lesson learned. —W.B.

Paint Those Faces
Before the hunt begins, hand your kid two tubes of camo cream makeup—black and green—and tell her to paint up. The result you see might be an attempt at a Navy SEAL’s war paint, a pair of vaguely recognizable velociraptors, or perhaps a nature scene complete with the sun and some flowers. It doesn’t matter. Regardless of the design, any liberal application of a couple dark colors will do the job at hiding a shiny young face, and kids usually find painting up much more enjoyable than being constricted by a camouflage mask. —W.B.

RELATED: The Family Guide to Noodling

Talk Like an Adult
I remember being young and in awe of the cuss words my dad and his hunting buddies used freely in the woods, right in front of me. I learned that properly selected profanity is the best way to handle a missed rabbit or spooked deer, and so even as a 10-year-old, I used it in the field without consequence. But I also learned the men didn’t say that stuff in mixed company, and so I had better not say it at school, either—at least, not where a teacher could hear it.

Today, I don’t necessarily set out to enrich the vocabulary of every youth I take hunting, but I don’t stop saying deer s - - - in favor of deer droppings because sensitive ears are present, either. I’ve never seen anything worse than a smile and a snicker come out of it. —W.B.

Bring the Screens
When I first started hunting with my kids, I struggled with the idea of phones or video games in the blind. We were there to enjoy nature, after all. But here’s the deal. Waiting on game animals takes time, and it can be boring. I’ve learned that having an electronic device in their pocket to alleviate that boredom helps keep the kids in the field longer, and that extra time directly translates to more success. —M.P.

Opportunity is the common thread in all the best youth hunts. Your best chance at making a lasting impression on a young hunter—whether they kill something or not—is to put critters in front of them. Here are four of the best opportunities in the country for doing just that.

Nebraska Youth Turkey Season: Unlike other youth seasons that last a day or two, Nebraska’s is open for a full week in early April, before the general shotgun turkey season begins. At that time, Cornhusker gobblers are just beginning to bust up from their winter flocks and are eager to come to a call and decoys.

Kansas Youth Deer Season: Young hunters get a special nine-day opportunity to hunt September bachelor bucks in Kansas with rifles, before the statewide archery season even begins. There is no better chance in the country for a kid to kill a giant buck.

Arkansas Youth Ducks Most southern duck hunters love the late season best of all. In Arkansas—and several other southern Mississippi Flyway states—youth duck season takes place over a weekend in early February, when there are typically swarms of eager mallards, greenwing teal, pintails, and gadwalls in the area. Bring plenty of shells.

Texas Youth Drawn Hunts Despite being known for sprawling private ranches, Texas has a draw system for some outstanding public hunts. Many of the best ones are youth hunts for deer, pigs, turkeys, and javelina with near 100 percent success rates. You can research past results and apply on the Texas Parks and Wildlife Department website. —W.B.