How to Shoot an Etruscan Double

Also known as a “Scotch” Double, killing two birds with one shot is an uncommon, but exciting, feat 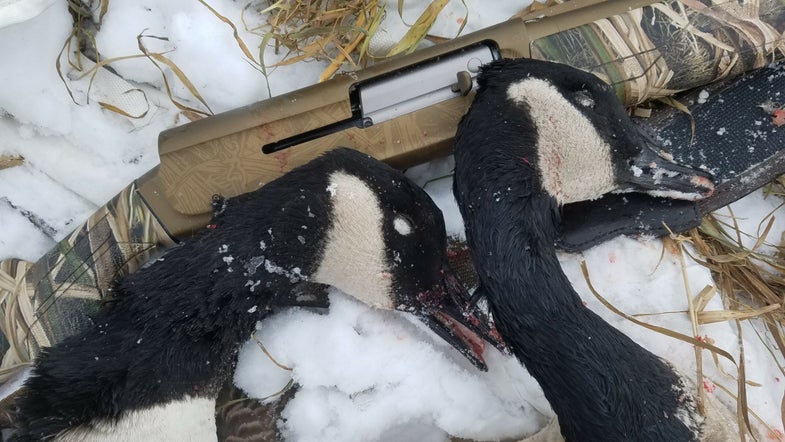 The author dropped these to geese with one shot. Phil Bourjaily
SHARE

A friend of mine who was a colonel in the Army Reserve told me one day word came down from above that ethnic humor would no longer tolerated, as some might be offended. His solution was to substitute “Etruscan” for “Irish,” “Italian,” or “Polish” in any joke. The Etruscan civilization disappeared about 3,000 years ago, so he figured there were no Etruscans left to offend.

Which brings us to the Etruscan Double, known in less PC times as the Scotch Double. That’s two birds with one shot, a very thrifty use of ammunition, hence, “Scotch.”

I killed two with one shot yesterday when a pair of geese decoyed to the five goose floaters I customarily set out with my duck decoys. As I sat up to shoot the first bird, the second slid in behind it, and my first thought was, “Oh, no, I’ll hit them both.” Then I thought, “So what? I was going to shoot them both anyway.” At the shot, both fell stone dead. That was only the second time I’ve ever killed two birds with one shot. The first took place about 20 years ago, on a pair of gadwalls in a timber hole in Arkansas. That one was documented on camera, with a videographer filming right over my shoulder. This one you’ll have to take my word for.

Actually, neither feat was that impressive, because both times I knew it was about to happen, but it wasn’t a shot I had planned. Shooting Scotch-Etruscan Doubles consistently is a skill you have to work on. There are many shooters who are able to break two targets or shoot two birds at once. You see it often on the sporting clays course, on stations where a true pair crosses. If your timing is good, you can get both with one shot. Likewise, waterfowl and quail hunters, whose quarry travels in bunches, can learn to look for two birds that are lining up as they are figuring out which ones to shoot. Old-time market hunters, who killed lots of birds every day, became experts at predicting which birds were about to line up before they pulled the trigger. For them, birds-to-shells was a matter of profit margin, so they had financial incentive to get good at it.

For my part, as much fun as it was to see 25 pounds of geese splash into the water at one shot, I’d prefer to shoot my doubles the regular way. In fact, with some birds, like teal, which fly in tight formations, you have to make an effort to only hit one with one shot sometimes. I try to pick a bird at the edge of the bunch, because if you shoot a bird in the middle of the flock, one or two more are likely to fall as well. I’d rather shoot one bird at a time, and leave the fancy shooting to the Etruscans.