How to Shoot More Teal This Season

Bluewings are fast—but not as fast as you think. Don’t let them surprise you 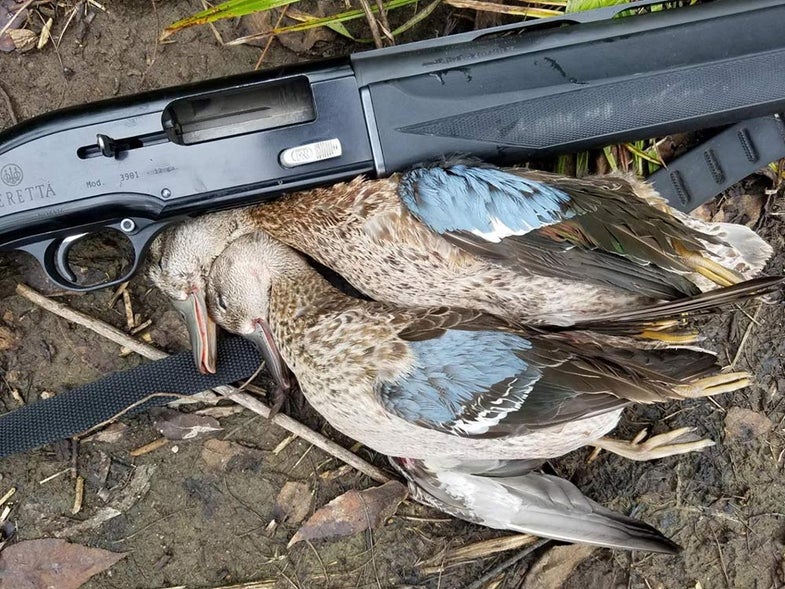 A pair of bluewing teal the author shot with his Beretta 3901. Phil Bourjaily
SHARE

It’s an article of faith among duck hunters that teal are fast. Even experienced hunters believe it. Robert Ruark, who knew one end of a gun from the other, once wrote: “I led one [teal] by a mile and he dropped like a rock. I led another by the same mile and he went on to Mexico.”

Yet if you shoot a teal with radar gun instead of a shotgun, you’ll find they top out at 30 mph, a lot slower than big ducks, which can do 50 with ease. In that way, teal are a lot like bobwhites, which are also slow fliers: They use the elements of surprise and confusion to make themselves seem much faster than they really are and evade predators, including us.

Teal make the most of their speed by staying low where you can’t see them. Often your first inkling that they’ve arrived is a bunch of little ducks twisting into the decoys, wingtip to wingtip, or, worse, buzzing past so it’s already too late to shoot.

There are two answers to the problem. The first is to be vigilant, and keep your hands on your gun. I break this rule all the time. The other day I arrived at my spot, threw out decoys, then slung my gun so I could text my wife, who was anxious to hear that I hadn’t drowned in the rising waters at the reservoir. As soon as I looked down at the phone, four bluewings flew over my head.

The other answer to is to consider that being taken by surprise is part of the fun and challenge of teal hunting. Don’t even try to take the bad, rushed shots. Wait for the ones you can see coming. When you can, remember that teal are not only slower than they appear, they’re smaller, too. A teal that looks to be in range is really close. With apologies to Ruark, and his mile-long leads, most teal can be killed by shooting at their beaks or a bit in front.

Teal can definitely be 20-gauge birds, although whatever gun you choose, it’s a good idea to bring an open choke, like IC, and smaller shot that will not only pattern more openly but will give you dense enough spreads to insure multiple hits on the little ducks. A lot of people like No. 5 or 6 shot for teal, and you can’t argue with their success. I lean toward No. 4, which still gives me plenty of density along with less chance that the pellets will lodge in the meat instead of plowing on through.