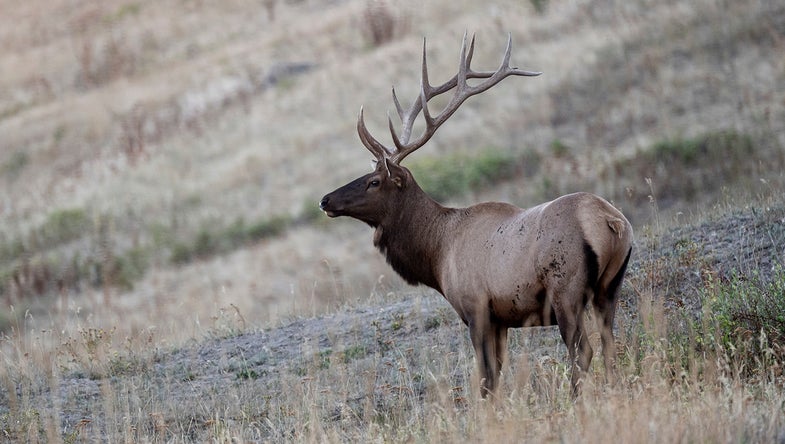 A 6x6 bull peers across an open meadow in the Rockies. John Hafner Photography
SHARE

The bull died in the shade, and when I came to his side, I just about collapsed. I remember resting my forehead on his right antler, struggling to gather my breath in the thin air. The 4×4 was not the biggest bull I’d seen all week, but kneeling beside him in that moment, it was hard for me to fathom that a larger animal could exist. All first elk, I imagine, must leave this impression.

We made short work of the field dressing and quartering, and after I carried the last load up the small, but steep, hill to the truck, I turned around and looked into the country below. The area was still and empty, but the scene that had played out two hours prior had not faded. My eyes retraced the paths that the now-phantom elk took after three hunters caught them off guard. As they ran, a call was made. One bull kept going. The other stopped.

After last October, it’ll be hard for me not to measure every hunting setting from here on out against that first morning in the mountains on the Colorado rifle opener. Rafe Nielsen and I followed our guide, Zach Workman, up the dark trail. To our left, the eastern half of the Spanish Peaks soared, their slopes glowing ghostly in the predawn. Twenty minutes into the hike, I stopped for a quick rest. The 9,000 feet of elevation was largely to blame for my getting winded, but it wasn’t the only factor. I had never hunted the high country before, and the elk tag in my pocket was another first. As we neared the meadow where Workman had been seeing elk grazing, the combination of adrenaline, anticipation, and altitude was almost suffocating.

The elk weren’t in the meadow, so we moved east toward a ridge. When we reached the top, Workman glassed north, and mixed within the skeletal trunks of the burnt forest were the elk. We spotted at least five, but they were all on National Forest land where Workman wasn’t permitted to guide.

“That’s an encouraging start,” Workman said. Unfortunately, the rest of the day failed to live up to it. Our hunt ­coincided with a heat wave, which meant our only prayer of seeing elk was in the opening and closing minutes of each day when it was cool enough for the animals to leave their shady hideouts. In two days’ watch beneath the Spanish Peaks, though, the elk never came into the open.

Given the tough conditions, our outfitter, Fred Eichler changed things up after the first two days, splitting groups and sending hunters to different spots. I was paired with Ryan Soloman, a 32-year-old guide with a thick beard and an even thicker Georgia accent. He and I covered a lot of ground on day three but saw nothing—until we were driving back to camp. In a private plot of winter wheat was a herd of 50-plus elk, and in the middle of it all was a mature 6×6. “That’s our bull,” Solomon said.

By the time we arrived the next morning, the herd was on its way into the wheat. Solomon and I kept our distance and watched from the truck.

I scanned for the herd bull, and when he finally came into view, I locked on. This was the first good look I’d had at a big bull all week, and while I wanted to hunt this elk, what I wanted more, in that moment, was simply to keep him in the glass where I could watch him usher the herd and see his screeching bugles begin as white plumes in the cold first light before they carried across the valley and struck my ears.

I didn’t get to watch him for long, though. Something spooked a few of the cows, sending them running in the opposite direction. Their fright infected the others, and in no time, the herd was gone.

Over the next day and a half, that herd gave us fits. We found them twice more but could never get into position for a shot. We gave up on the afternoon of the last day. On our way back to the house, we noticed a group from our hunting party were glassing on the side of the road. High on a ridge 1,000 yards away, they’d found bulls. We watched those elk for nearly an hour, until some of the satellite bulls crested the ridge and dropped over to the opposite side. Solomon, Shane Meisel, and I made our move to the back side of the ridge to see if we could intercept the bulls. We came to an overlook and searched the area below. That’s when they emerged—two 4×4 bulls.

They began to run away, and I quickly got my rifle onto the shooting sticks. I buried the stock in my shoulder as my eyes followed the paths of the elk. Behind me, Solomon made a cow call. One bull kept going. The other stopped.

This story was first published in the October 2018 issue of Field & Stream.