The Drunk and Disorderly, one of the most innovative streamers out there, makes wary browns and hungry fly anglers totally punch-drunk 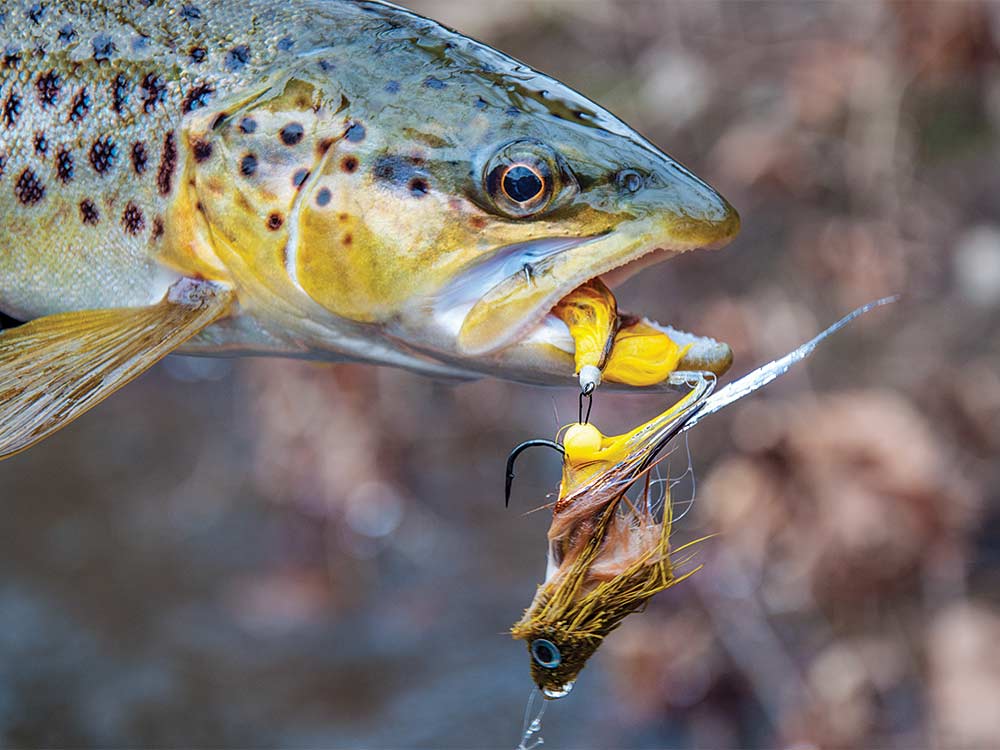 The first time I ever fished a Drunk & Disorderly, I hated the fly. A friend had given the streamer to me in 2015, swearing it was a next-level ringer. All I knew about it was that the unique head, made of packed deer-body hair and shaved into a steep doorstop wedge, was modeled after the lip of an Original Rapala Floater. Armed with that minimal information, what I expected that wedge to do was make the fly dive and wobble like a lipped hard bait. All I saw was a mess of hair spinning and twisting on the surface. After a few casts, I put it back in my box and practically erased it from memory.

What I didn’t learn until the following season was that the Drunk & Disorderly—more commonly called the D&D—wasn’t the problem. I was the problem. I was using floating line when I formed my first impression. My leader was far too short. Most notably, I was stripping in long pulls like I would with most other streamers. The D&D, I came to find out, required a little more thought and finesse to shine.

On a Delaware River trout float that spring, the pattern revealed its remarkable ability to move fish that don’t seem to want to move. After flashing only one trout in 6 miles of a 7-mile float, I tied on that D&D out of desperation. This time I was using a sink tip. This time I worked in short, sharp line pops with my wrist. I could make the fly dig and dart. It rolled to one side and recovered. It flashed and turned erratically. Within three casts, a nice brown jumped off the bottom and wolfed it. I would turn five more fish before we reached the takeout, and because of that final mile, the once misunderstood D&D would be on its way to becoming a fly I feel naked without.

Veteran Michigan trout guide Tom Lynch (the​fish​­whisperer.com) created the D&D nearly 12 years ago, though its widespread popularity has blossomed only in the last five. Social media shots of it hanging in hook jaws from New Zealand to New York certainly fueled the buzz. More critically, when Orvis added the pattern to its lineup, the D&D became readily available over the counter to anglers who had never used one before. There are plenty of D&D tying tutorials on YouTube, but best of luck with those unless you’re really skilled at shaping spun hair. I’m not. To date, I’ve carved four D&D heads that have actually performed. The jointed body, which features lots of flash, a rattle, palmered bunny strips, and mallard flanks, is easy enough to tie. Every single element plays a role in giving the streamer its full profile, steering ability, and unique action, but mess up that head, and a perfect body means squat. Get it right, and the D&D will do things in water a lot of other streamers can’t.

“Inconsistency is the best way to present some kind of injured prey,” Lynch says. “With a weighted fly, you’re spending all your energy keeping it off the bottom, and the fly is always moving in the same rhythmic pattern. If you look at a Rapala, it’s always kicking out and away, occasionally showing its flash. It’s that inconsistent random flash that I believe gets a fish to move whether it’s in a state of predation or not, and the D&D produces that same random flash.”

One of the fly’s more potent aspects is its ability to let you milk the zone. Lynch pointed out that with a weighted fly, you might get three good strips through a likely spot, whereas you can work the buoyant D&D fast, creating an erratic, flashy action, or you can practically keep it twitching and hovering in place. The design allows the current to make the fly breathe and wag even when you’re not moving it, and any fly or lure that is doing something when you’re doing nothing is usually a producer in a wide range of conditions. In low, clear water, a D&D can be gingerly finessed, coaxing strikes from fish that may have fled from a fast-­moving weighted streamer. In high, dirty water, the D&D’s flash and sound can magically call brutes out of the murk when it’s worked more aggressively. The fly has proven so versatile that I’m far from the only former skeptic who’s been converted.

My friend and guide Nick Raftas (wild​east​­outfitters.com) spends a lot of time on the Lehigh River in northeast Pennsylvania, which from my experience with him is an incredibly fickle trout fishery. Despite the juicy attributes of this big water, for several seasons it rarely showed me any of its browns. When I wasn’t there, Raftas and his clients would stick the occasional 20-plus-incher on a streamer, though even he would admit that they were generally hard-earned. Then, in 2018, something happened. The ridiculous amount of rain we got in the Northeast made the Lehigh colder, dirtier, and higher than normal for much of the season. To combat these conditions, Raftas began leaning on the D&D more than he ever had before. In short order, the fly he was once lukewarm to became his most dependable.

“Brown trout seem to have a serious weakness for this fly,” Raftas says. “I started noticing that even in high flows, the splat of a D&D on the surface was often enough to trigger a strike. It’s almost as if it mimics a mouse falling off the bank first, and then a dying baitfish once you begin to move it. It put trout in my boat more consistently than any other pattern in 2018, and because it fishes high in the column, all the takes are very visual. That really makes it an exciting fly to fish. It kept my clients really engaged, and many of them weren’t devout streamer anglers.”

Seeing Raftas’ success, I followed his lead with the D&D when I finally got to join him on the Lehigh. From the beginning of the float to the end, we moved and hooked more browns than I’d seen there in the previous three years. My curse had been lifted. In four more visits between September and late December, the D&D never failed to put at least one fish in the net and get several others to take a swing. The river conditions undoubtedly played a vital role in our increased success, but every time there would be a lull in action and I’d change flies, it wouldn’t be long before I went back to the D&D. It helped me get the best of a river I considered my nemesis, which only strengthened the confidence I already had in the pattern. For some, there will be a learning curve with this fly, and my best advice for shortening it is to use the line—not the rod—to make it dance. Stick with it, and when you get it shimmying just right, you won’t be able to take your eyes off it. Neither will the fish.

Read Next: How to Flyfish with Deer-Hair Flies

According to those obnoxious infomercials, you can fix a giant hole in your boat with the Flex Seal family of products. I doubt it. Don’t try it. If you tie foam flies, however, you may never find a better sealant than clear Flex Seal Liquid. Just brush it on for a durable finish that stays soft and flexible when dry. But wait, there’s more! I’ve also not had any brand of marker or paint run or crack under a coating of this miracle goop.