How to Train Your Dog to Blood-Track Whitetail Deer

Whether you train your own dog or call upon one for help, a blood-tracking canine could save your deer season 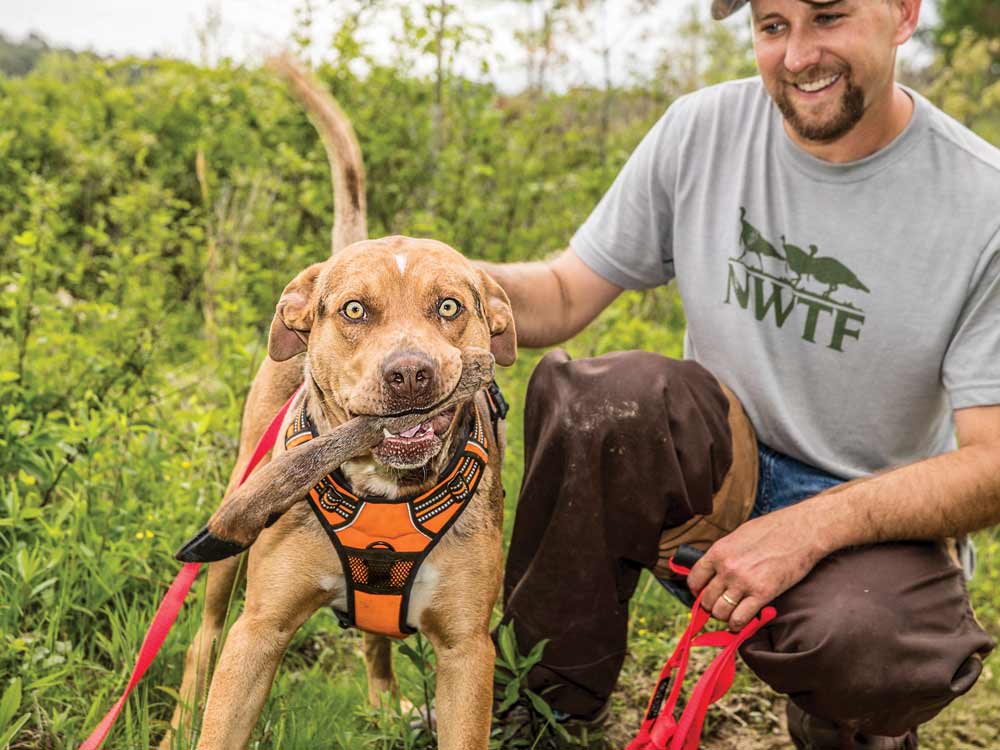 The buck I’d been after for three days—a heavy, chocolate 10-pointer—was standing 95 yards down the sendero, quartering to slightly. I put the crosshairs of the .308 on the point of his shoulder, expecting to break it and watch the deer fall dead. Instead, the buck lunged into the South Texas brush, his tail tucked tight. Charles Coker, my guide, and I sat in the box blind discussing the shot. The buck was hit. Even though the reaction seemed more like that of a gut shot than a quartering-to shoulder shot, surely he would be dead just inside the brush. After an hour, we climbed out of the box blind for a look. The buck bolted from his bed just off the edge of the sendero. A pool of bright-red blood was already drying in the sand, and it dribbled into the brush ahead of us. We both knew we should’ve waited longer, but hindsight didn’t change the situation. That’s when I asked Coker, “Do you know someone with a tracking dog?”

A thousand miles away, at home in Kentucky, deer season had been underway for four months, and my 11-month-old Catahoula cur, Levee, was coming into his own as a tracking dog. I’d never had the patience to be much of a dog trainer, but I do a lot of deer hunting. Between finding my own deer and helping friends and family find theirs, I follow 25 or so blood trails in a season. Most are easy to sort out—but there are exceptions.

Shoot at enough deer, and you’ll eventually hit one that you cannot find. In the best cases, the wound is superficial and the animal survives. But sometimes a track is simply impossible for the human eye to see, and dead animals go unrecovered. If you’ve made the decision to shoot a deer, it’s your responsibility to do everything you can to find it. That’s why my wife and I bought Levee.

Kentucky isn’t alone when it comes to tracking dogs. Most states now allow canines to be used—at least in some manner—in the recovery of wounded big game, but lingering stigmas remain. In a few states, such as Iowa and West Virginia, tracking dogs are still illegal. In Pennsylvania, tracking dogs were legalized in March 2020.

If you ask me, the controversy surrounding tracking dogs is baffling. No one objects to a retriever in a duck blind or a pointer trained to “hunt dead.” Without them, birds would be lost, wasted. To any hunter who’s known the angst of losing a deer but seen a good tracking dog at work, it’s difficult to imagine why someone would be opposed to them. Yet some still wrongly associate tracking dogs with running healthy deer with packs of hounds, crossing property lines, and disturbing other hunters on stand. It’s taken a while to overcome that impression, and it’s why, in most states, tracking dogs must be kept on a leash.

Few people have done more to educate the hunting public and advocate for tracking dogs as conservation tools than John and Jolanta Jeanneney of Berne, New York. John first saw German wirehaired dachshunds used for blood tracking while he was in Europe. He later owned one as a pet, but he didn’t think of the dog as a hunting tool until he shot and lost a doe with a slug gun.

“I looked for her all day and couldn’t find her,” he says. “A week later, some other hunters told me they’d found her dead a quarter-mile away. I knew from what I’d seen in Europe that she would’ve been easy to find with a dog. But that was in the 1970s, and dogs were not legal for deer hunting in New York, or most of the country. So I applied to New York State for a research permit to see if the hunting and nonhunting public would accept the use of tracking dogs. Gradually, we expanded the scope of the experiment. The system worked.”

New York legalized the use of leashed tracking dogs in 1986. The Jeanneneys began training more dogs and using them to help hunters find lost deer (to date, they’ve recovered more than 300 animals). John wrote a book called Tracking Dogs for Finding Wounded Deer, which has now been printed in a second edition. As awareness of tracking dogs grew and regulations were relaxed, he and Jolanta realized that many hunters who needed a tracking dog’s help didn’t know how to find one. Others who wanted to train their own dogs didn’t know where to start. In 2005, with the help of some fellow trackers, the Jeanneneys started the United Blood Tracker’s Association (UBT). It’s a resource for hunters and trackers alike, complete with a free contact list of more than 450 trackers and updated, state-by-state blood-dog regulation summaries.

Nothing increases your chances of recovering a lost deer more than using a tracking dog (and if it’s not legal in your state, raise hell until it is). Thanks to resources like the UBT—as well as other websites and social media groups where trackers collaborate—it’s easier than ever to locate a dog when you need one.

Of course, you could train your own tracking dog too. Even though I’m not a “dog guy,” I’ve found tracking with Levee to be extremely rewarding. Before last deer season, I spent summer evenings setting mock blood trails and working him on a 30-foot leash. On the evening of the archery opener, I shot a doe and put him on the first droplets of blood at the hit site an hour later. It was an easy track, and Levee found the dead deer in less than a minute. By the end of the season, he had followed 11 real trails and recovered nine deer.

Read Next: 5 Top Blood-Trailing Tips From a Master Tracker

Picking Up The Blood Trail in Texas

As Texans usually do, Coker “knew a guy,” and called him right away. Robbie Hurt and his wife, Cynthia, arrived within a couple of hours with snake boots, reassuring smiles, and two mountain cur–Walker hound mixed breeds fitted with GPS tracking collars.

In most of Texas (though there are exceptions), up to two tracking dogs can be used at a time, without a leash, to pursue wounded animals. Robbie turned his older dog, Buck, loose, then asked to be taken to the site of the shot. We followed Buck from the sendero to the bed, which now had only a faint brown stain. I didn’t have much faith, but Buck put his nose to the sand and melted into the brush. We walked back to the trucks while Robbie watched the dog’s progress on a GPS screen.

Buck drifted 100 yards from the bed, then 200, 300… We drove around the perimeter of the section to keep up with him. Coker’s ranch is low-fenced, and we couldn’t risk the dog crossing a property line. The icon on Hurt’s GPS began to waver, left and then right. And then, 672 yards away from the sendero, the icon stopped.

Robbie disappeared into the brush, and I did my best not to shuffle around like a kid waiting to see Santa. Cynthia’s cellphone rang five minutes later: “Buck found his buck.”

A woodchopper couldn’t have torn through mesquite any more furiously. The buck was stiff but unspoiled. My bullet had hit behind the shoulder and exited the paunch. It was a lethal hit—albeit 4 inches from where I’d aimed—that bled almost entirely inside the deer’s chest. Without the dog, the deer would’ve been wasted. And this story would’ve had a different ending indeed.

A good nose, interest in deer and blood, and a willingness to please are all that’s required of a tracking dog, and so about any breed can work. But some of the most popular breeds include:

The Catahoula cur is the state dog of Louisiana. ‘Houlas, like my dog, Levee, are big, high-energy animals with excellent noses, but they’re also responsive to training. Blackmouth curs—think Old Yeller—are similar in size, ability, and temperament, and popular among serious trackers.

Their small size, strong nose, and even temperament make them ideally suited for working on a leash.

Few breeds have a better nose, but large, powerful bloodhounds can be difficult to control on a leash.

Labs are the most popular breed in the United States, and generally have the nose and intelligence to track a deer.

The official dog of Texas, the Lacy is popular in the Lone Star State for herding cattle and baying pigs, but it’s also gained a nationwide following as an excellent tracking dog.

How to Train a Blood-Tracking Dog

Training a tracker isn’t nearly as difficult as you might think. Here are a few things to keep in mind as you get started.

Get control with a leash and harness

It’s fine to let a puppy follow some short tracks, but graduate quickly to working the dog on a leash. John Jeanneney recommends using a harness that the dog wears only while tracking.

Save and freeze blood and legs from every deer you can to later use for working your dog in the off-season. Create a track and allow it to sit for several hours—just like a real blood trail—before working your dog. Don’t be afraid to work at night, since that’s when you’ll be following many a real track.

Learn how your dog moves when tracking

Every track will have challenges where a deer stops bleeding, crosses an obstacle, etc., and a tracking dog solves those problems with his nose. Make your mock tracks challenging, and study your dog’s body language both when he loses the track and when he finds it again. When you see that on a real track in the field, trust it. —W.B.