Tourists know this spot as a tropical getaway with fancy resorts. Outdoorsmen know it as a deer-hunting paradise 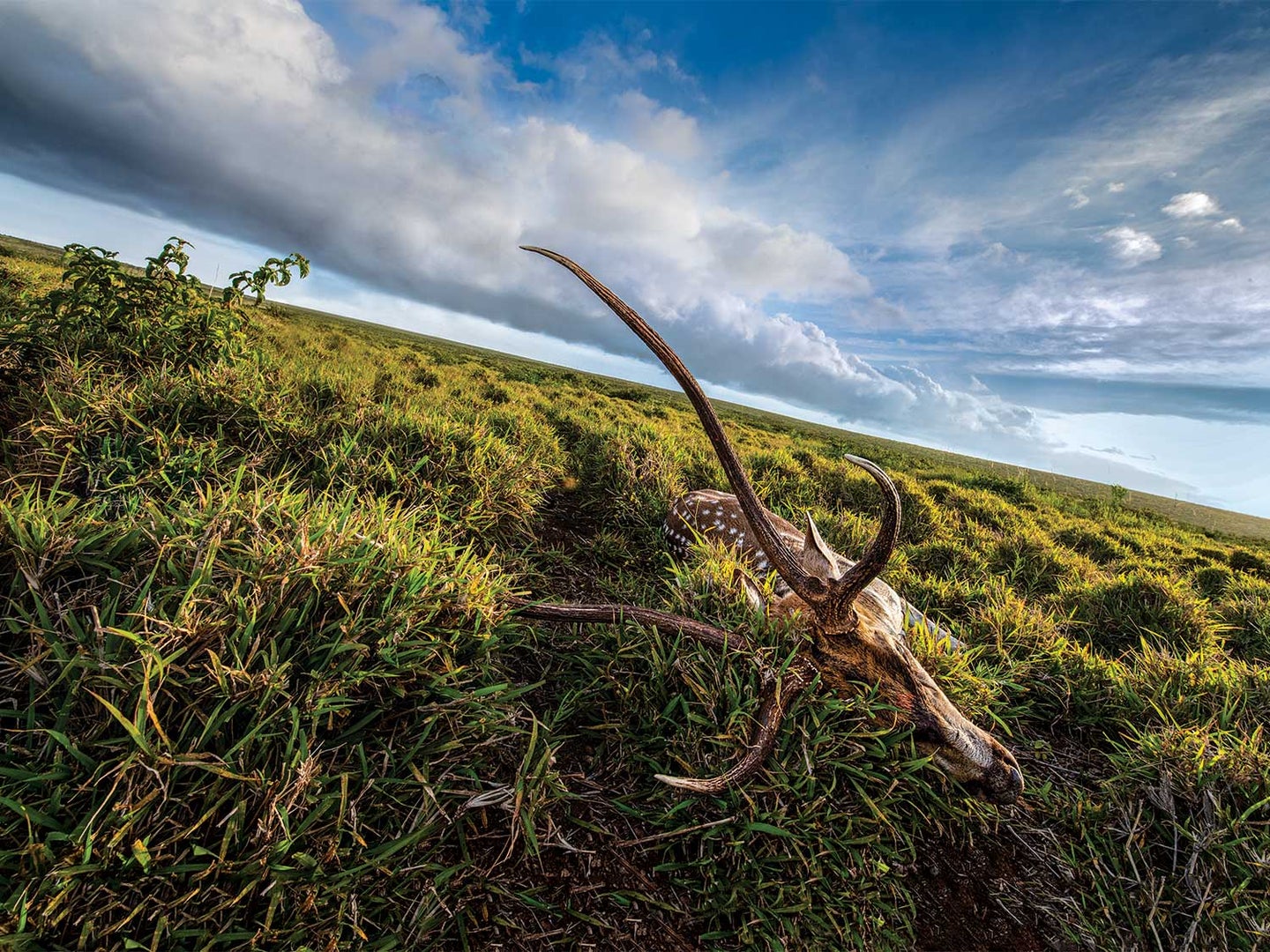 Before going to Hawaii, the idea of deer hunting there struck me as akin to pineapple on pizza—an odd combination that contradicts the natural order of things. Proper pizza is topped with meat, not fruit (and, no, tomatoes don’t count), and deer are hunted in timber, mountains, deserts, and swamps—not in a tropical honeymoon getaway like Lanai.

The flight from Honolulu didn’t take long, for which I was grateful. The gentleman in the seat next to me was friendly but large. I’m not built like a Milanese runway model either, so we both tried to make the best of it as our forearms jostled for the center armrest. He was wearing flip-flops, shorts, and a T-shirt, and his carry-on consisted of a Daiwa spinning rod and reel. He said he was making the hop from Oahu to visit family for the weekend.

I, on the other hand, was in full tourist mode, wearing a pineapple-decorated shirt, long pants, and hunting boots. If my bright white Montana skin didn’t give me away, my jet-lagged demeanor certainly marked me as someone who had just arrived from the mainland.

This wasn’t the first time I had crossed multiple time zones to get to a deer camp—but it was the first deer camp where I was handed a mai tai upon arrival and experienced a robotic toilet seat in my room that took hands-free ­operation to the next level. Before I knew it, my attitude was adjusted.

Lanai is an interesting place, even by the standards of Hawaii. In 1922, it was purchased by James Dole for about $1.1 million and transformed into the world’s largest pineapple plantation. The pineapple business eventually petered out—the final harvest on Lanai occurred in 1992—and the corporation that owned the Dole Food Company sold the island to Larry Ellison, the mega-billionaire former CEO of Oracle Corporation, in 2012 for $300 million.

And when I say sold the island, that’s exactly what I mean. Ellison owns about 97 percent of Lanai’s 90,000 acres, with the small remainder belonging to the state of Hawaii.

The island’s single settlement, Lanai City, has about 3,100 residents, the majority of whom work to support the island’s tourism industry, which centers around the Four Seasons Resort—my deer camp—also owned by Ellison.

As you might imagine, most visitors to the island come to hit the beach, or to golf, or just to get spoiled by the posh service at the resort. But a small handful are drawn to the middle reaches of Lanai—the high ground that was once divided into rows of pineapple trees but is now covered in grass and scrub brush, and is home to the world’s largest herd of free-range axis deer.

You’re not likely to see the former pineapple groves featured on many postcards or in tourism brochures. They just don’t fit most people’s idea of Hawaii. But the savannah that covers the interior of the island, which rises up to a ridge of mountains, has its own kind of beauty—as long as you don’t stare too closely at the ground. The dark-red soil reminded me of Georgia clay, and I’m sure that during the rainy season, it turns into a slick boot-sucking gumbo. But it was hot and dry when my companions and I went to sight in our ­rifles, and with each step we kicked up puffs of dust.

Everywhere I looked, bits of frayed plastic sheeting poked out of the ground, fluttering in the wind. Shards of broken PVC pipe dotted the landscape too, along with valves and other pieces of hardware I couldn’t identify—all remnants of the vast irrigation network that had once ­delivered water across the plantation and was now slowly deteriorating under the sun. I’m guessing it’ll take many decades, if not centuries, for the land to recover and reabsorb the detritus.

Our shooting range consisted of a couple of benches, some target standards at 100 yards, and a smattering of steel targets that stretched out to 700 yards.

There were seven folks in our group, and we were here to test some new gear from Browning and Leupold. We had several different rifles to choose from, chambered in either .300 Win. Mag. or 6.5 Creedmoor. Since I planned to do a lot of shooting, I grabbed one of the six-fives and a couple of boxes of ammo.

While Browning isn’t touting the Long Range Pro as a hunting load, the company recognizes that plenty of hunters will give these bullets a try on game. My own experience using match bullets on game has been quite positive, though I’ve limited it to shooting animals mule-deer-size and smaller.

The combo of the match ammo, the McMillan stocked Browning X-Bolt, and ­Leupold’s VX-6 2–12 delivered excellent accuracy. After confirming my 100-yard zero, I started plinking steel and built a range card. The rifle had no problem ringing the most distant targets and handled nicely from unsupported field positions too.

Early the next morning, I jumped into a pickup with Alec Pascua, a 48-year-old hunting guide who spends his days off freediving with a spear gun in the pelagic waters off the island.Locating the deer wasn’t difficult. In the mornings and evenings, they are on the move in large numbers, feeding, going to water, or looking for a spot to bed and get out of the sun. Finding a big buck isn’t a given, though, and you can end up pinned down with a lot of nervous deer looking your way and many blown stalks.

But one by one, my hunting partners and I put bucks on the ground. My deer came on the second day. Pascua spotted him way out on a flat below us feeding in the brush. I took a seated position, braced my shooting sticks against a log, tucked my pack under my armpit to support the rear of the stock, and dropped the deer with a shot to the neck.

A Cut Above the Rest

Afterward, Pascua and I loaded the deer into his pickup and drove to a small house in Lanai City with an archway made from antler sheds and wild sheep skulls, under which hung a sign that read Bob the Butcher.At first glance, Bob and his wife, Lorie, who run the business together, didn’t inspire a lot of confidence. They gave off a disheveled lack of urgency that might have been the result of years of living on island time, partaking in ­perspective-altering substances, or both. Then I saw him at work, carefully trimming the meat from the tips of the ribs to create frenched racks of loin, and rolling the shoulder meat into roasts tied up neatly with butcher’s string. It just so happens that Bob is a classically trained chef who’d had enough of the restaurant rat race and wanted to take it down a notch. Without a doubt, he’s the most talented game butcher I’ve ever met.

It’s nice to think that every game animal gets processed with such expertise, but it is especially good to see axis deer treated with that care, because if I were to rank the best venison I’ve tasted, axis deer would be right at the top of the list.

To satisfy my culinary cravings and my desire for quirky adventure, I’d go to Hawaii again in a heartbeat. While I’ll never desecrate a pizza with pineapple, I’d gladly cross the Pacific to belly-crawl through the grassland on Lanai for axis deer and spend more time in the most unusual, and luxurious, deer camp I’ve ever seen.