Gunfight: 12 Gauge vs. 20 Gauge for Waterfowl and Upland Birds

With new and improved shotshell options, today's wingshooters are wild for sub-gauge shotguns. But don't trade your 12 in for a 20 before you read this 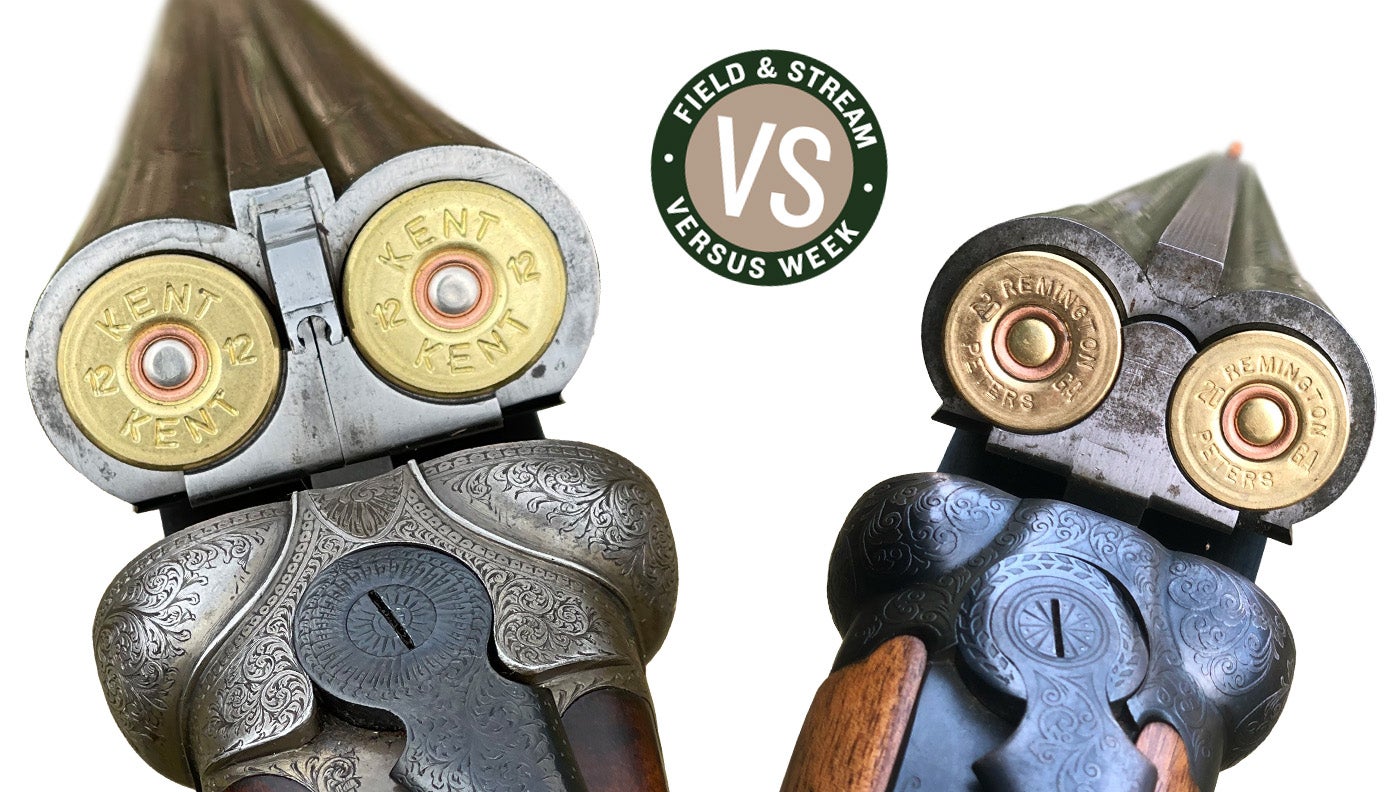 Editor’s note: As hunters and anglers, we don’t agree on everything. We’ve even been known to argue on occasion. That’s why this week is all about figuring out who’s right and who’s just plain wrong. Every day we’ll be posting stories to get to the bottom of hunting and fishing’s most important debates—like 870 vs. 500, summer sausage vs. venison jerky, and fly fishing vs. spin fishing. Welcome to Versus Week.

The 20-gauge is having a moment again, with hunters giddy on TSS and bismuth putting up their 12s in favor of the smaller bore. That includes me to a certain small extent. I haven’t shot a pheasant with a 12-gauge in two years, having switched, for the time being, to a 20-gauge O/U. So, I totally get that 20s can be light, trim, pleasant to carry, and effective.

But let’s not go overboard here. A 20-gauge might be all you need for, say, pheasants over a pointing dog, or doves coming to a spinner, or ducks over decoys. Loaded with TSS, a 20 will kill turkeys farther away than anyone should shoot them. And yet, while that’s all true, it does not for one minute change the fact that anything a 20-gauge can do, a 12 can do better.

It’s such a lopsided comparison, in fact, that I’m not going to bother detailing the attributes one and then the other. I’m going to simply list the many in which the 12 wins.

With its bigger bore and larger hull capacity, the 12-gauge can shoot a wide range of payloads, from 5/8-ounce Minishells up to 2-ounce-plus turkey loads. Twenties have a much more limited range. You might be able to reload ½-ounce shells for them, but ¾-ounce is more realistic, and 20s top out around 1-5/16 ounces of lead, or 1½ ounces with TSS. Also, even 3-inch 20-gauge hulls can’t hold much in the way of big pellets like BBs or buckshot.

Sure 20-gauge TSS can drop a gobbler way out there, but if that’s what you’re after, a 12 can reach even farther.

The 12-gauge shoots more efficient patterns than the smaller 20-gauge bore when it comes to shooting easily deformed shot like lead, or brittle shot like bismuth. The difference may not be much in many cases, but it exists. Why be less efficient when you can be more efficient?

Heavier guns (more on gun weight in a bit) are faster to the target. It’s counter-intuitive but true. I have proven this to my own satisfaction, with light 20s and heavy 12s, clays and a stopwatch.

If you don’t want to take my word for it, how about this? There is no faster game than Olympic Skeet, with its 60 mph targets, lots of doubles, variable delay, and low gun start. You can shoot any gun you want, and no loads heavier than 24 grams (7/8 ounce) are allowed. If a light 20-gauge were faster to the target, everybody who wanted to win a gold medal would shoot them. Nobody ever does. They shoot 12s.

The added heft of a 12-gauge makes the gun smoother swinging, surer-pointing, and harder to strangle or over-control. Light guns are often “whippy” (although I never liked that term and prefer to think of them as “flighty”) especially at longer ranges. Smoothness is way more important than a fast start when you’re shooting a shotgun.

The exception is that some smaller shooters might have an easier time handling a 20-gauge with lighter, softer-kicking loads in the field. For them, a 20-gauge might be less awkward to shoot, and therefore a better choice. But, this is the exception.

If low-recoil is what you want, use reasonable loads in a soft-shooting 12 like this Beretta A400.

Nothing kicks less than very light target loads in a 12-gauge gas-operated semiauto. Conversely, a light 20-gauge, even loaded with nothing more than a 7/8 ounce target load, can sting.  I have seen kids absolutely rocked by very light youth model 20-gauge pumps and standard target loads. Gauge has nothing to do with recoil. Last time I started a new shooter, I let her try a few of my guns, including a 20 and a 28. Once she got her hands on the soft-kicking 12-gauge Remington V3, she wouldn’t shoot anything else.

The 20-gauge’s reputation for low recoil stems entirely from the light loads people shoot through these guns. Recoil is a factor only of payload weight, payload velocity, and gun weight. Gauge has nothing to do with it. Twenties only kick less than 12s when you compare apples to oranges.

Twenty gauges range from 5½ pounds or so up to 7-plus. Twelve-gauges come in all shapes and sizes. My own 12s range from a 6½-pound double to a 8¾-pound target O/U, and you can find both lighter and heavier 12s. Some alloy-frame 12-gauge O/Us or older, 2-inch 12-gauge doubles, weigh about 6 pounds. Once you get much under 6 pounds, shotguns become ever more difficult to shoot well. In terms of practical light weight, you can find a 12 that’s nearly as light as any 20 worth hunting with.

Used 20-gauge shotguns sell faster and for more money than the same gun in 12-gauge. If you’re looking for a deal, shop for a 12. As I’ve mentioned before, the very best deals in old guns are older British guns, especially boxlocks from lesser-known makers. Nobody wants these guns because they’re not smallbores. And yet, they are often well under 7 pounds, just the right weight for carrying in the uplands and shooting well. And, they’re cool—and neglected. Spot one sitting forlornly in the used gun rack, bide your time, and make a low-ball offer, and you might surprise yourself with the deal you get.

There. I said it. A 12-gauge is more ethical. There is nothing “sporting” (or, worse “manly” as some will tell you) about shooting little guns, unless you are so disciplined in your shot selection that you pass shots with your smallbore that you’d take with a 12 and don’t mind if you come home with fewer birds because of it.

My feeling about 12 vs. 20 comes down to this: If I shoot a bird that keeps flying—and it can happen with any gauge—I want to know that I was shooting enough gun. I’d hate to think I caused a bird to get away and suffer just because I thought a little gun was somehow “more fun.”