Claira Sallenbach made a clean 350-yard shot on this bull of a lifetime, which will easily make the B&C book 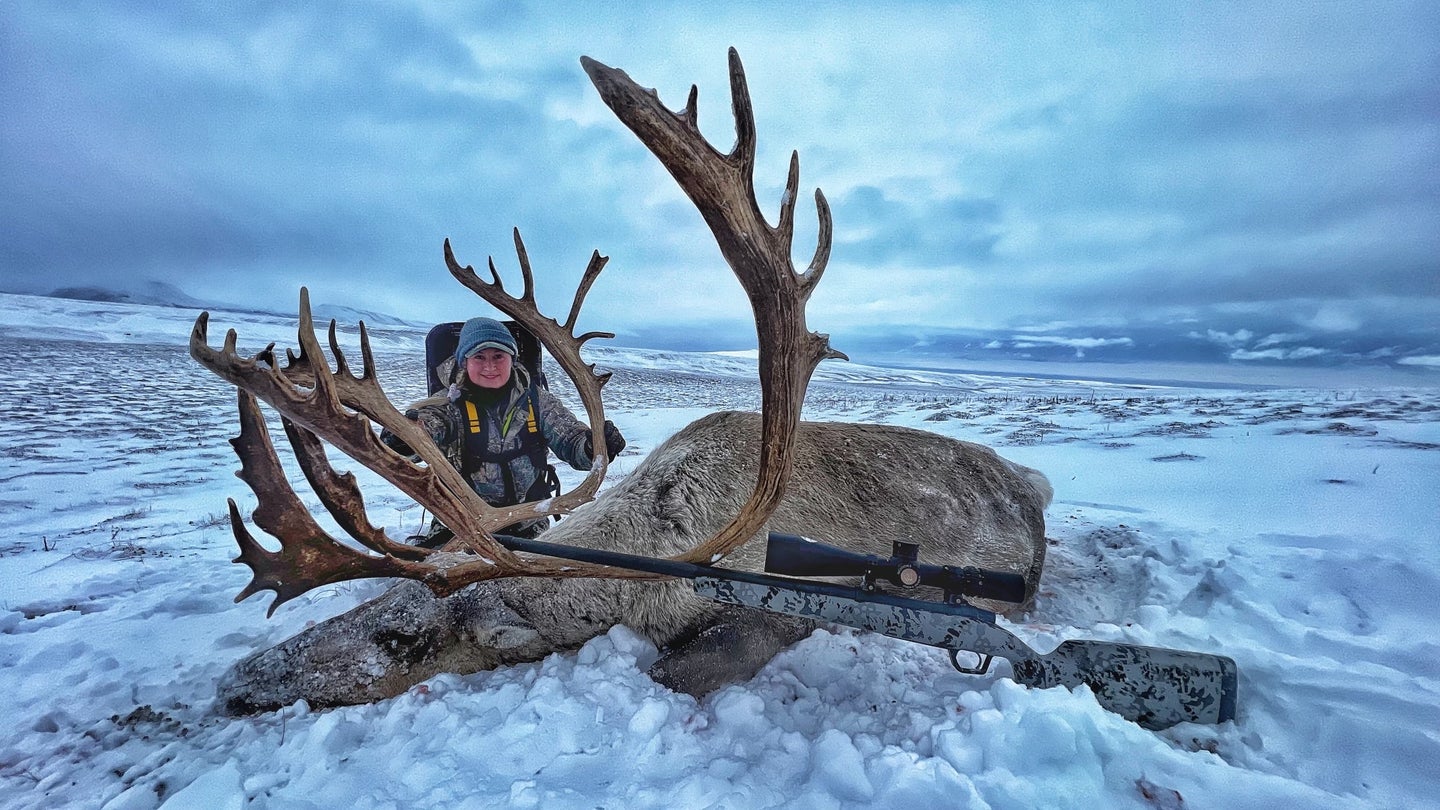 Growing up in a large Native Alaskan family, Claira Sallenbach has always considered herself to be first and foremost a meat hunter. But when she accepted a friend’s offer to hunt caribou on the Alaskan Peninsula in November to celebrate her 30th birthday, she learned that filling the family freezer could also lead to the trophy of a lifetime. Hunting in the teeth of an approaching storm, Sallenbach made the longest shot of her life to bring down a 400-plus-inch bull that should land her in the Boone & Crockett record book.

The Hunt Took Place During a Narrow Window of Good Weather

Sallenbach spends 9 to 10 months each year working on a commercial fishing boat in Alaska, primarily chasing salmon in the Aleutian Islands. She’s used to rough weather and extreme temperatures, but the long hours on the boat limit her hunting opportunities. When her fishing season ended early this year, though, she jumped at the chance to visit Cold Bay, even though severe storms were battering the state. “It’s been nothing but windstorms with 50 to 80 mile per hour winds on and off for months, and we ended up trapped in the house for three or four days with 8- to 9-foot snowdrifts piling up overnight,” she recalls. When the weather finally broke on November 28, roads were impassable, but Sallenbach and her friend’s husband, Mark, were able to borrow a pair of four-wheelers from a neighbor. They rode 25 miles out of town to where Mark had shot a caribou a couple of weeks earlier, hoping that some members of the herd were still in the area.

Overlooking a valley, the pair was able to spot two bulls and four cows on a hillside about 2 miles away. They left the four-wheelers and set off on foot. Making their way through knee-deep snow, they closed to within 500 yards, but Sallenbach—who “got way into shooting” at 15 years old and fell hard for hunting at 19 when she took six deer in her first season—didn’t feel comfortable at that distance. “Shooting over 300 yards is just not something I do very often,” she explains.

Carrying only a rifle and one small pack to use as a gun rest, they began to belly crawl into the wind, which had started to pick up again and was blowing 25 miles per hour as another storm moved in. They were able to close to 350 yards.

“We were at the top of this tiny little bump knoll, and if we’d tried to get closer it would have put us at a bad angle,” Sallenbach says. “The caribou were already looking at us, the storm was coming, and if we scared them off, we weren’t going to have time to chase them. It was shoot or go home. Mark kept saying, ‘If you’re comfortable take the shot.’ I had the bull in my sights, I felt comfortable and everything was absolutely perfect.” The longest shot she has ever taken turned out to also be one the cleanest, Sallenbach says. “I don’t think I even hit a bone, except maybe nicking a rib on the exit wound.”

The Caribou Taped Out Well Above the B&C Mininum

“You could tell he was a beast and a fighter,” Sallenbach says. “With his huge beard blowing in the wind, he looked like this terrifying old soul who’d just beat you up. He’s definitely on the larger side of the scale for caribou. He’s not record-setting, but definitely large enough to drop some jaws.”

Sallenbach says her family shaped her attitude toward hunting. “My mom is very traditionally native in her spiritual beliefs,” she says. “When you take an animal you never kill without the intent of having that energy go somewhere else. Anytime I’ve ever shot an animal, the first thing I do is thank it for its sacrifice. It’s a very emotional experience because you are taking another creature’s life, but it’s out of the intent to keep your own family fed.”

But after chasing elk in the Rocky Mountains during her college years in Colorado, and bowhunting whitetails in Missouri and Texas, she also came to appreciate the lure of a trophy rack. “I mean, you can’t not want one, because it’s super-exciting to see these animals in their prime that can produce these dominant racks that are just monstrous,” she says. “And now I have this huge rack that I get to admire and every time I look at it. It’s gonna bring me back to that exact moment when I walked up and saw this animal. It brought me to my knees. Even though taking a trophy had never been my initial goal, I’m definitely excited and surprised that I got so lucky.”