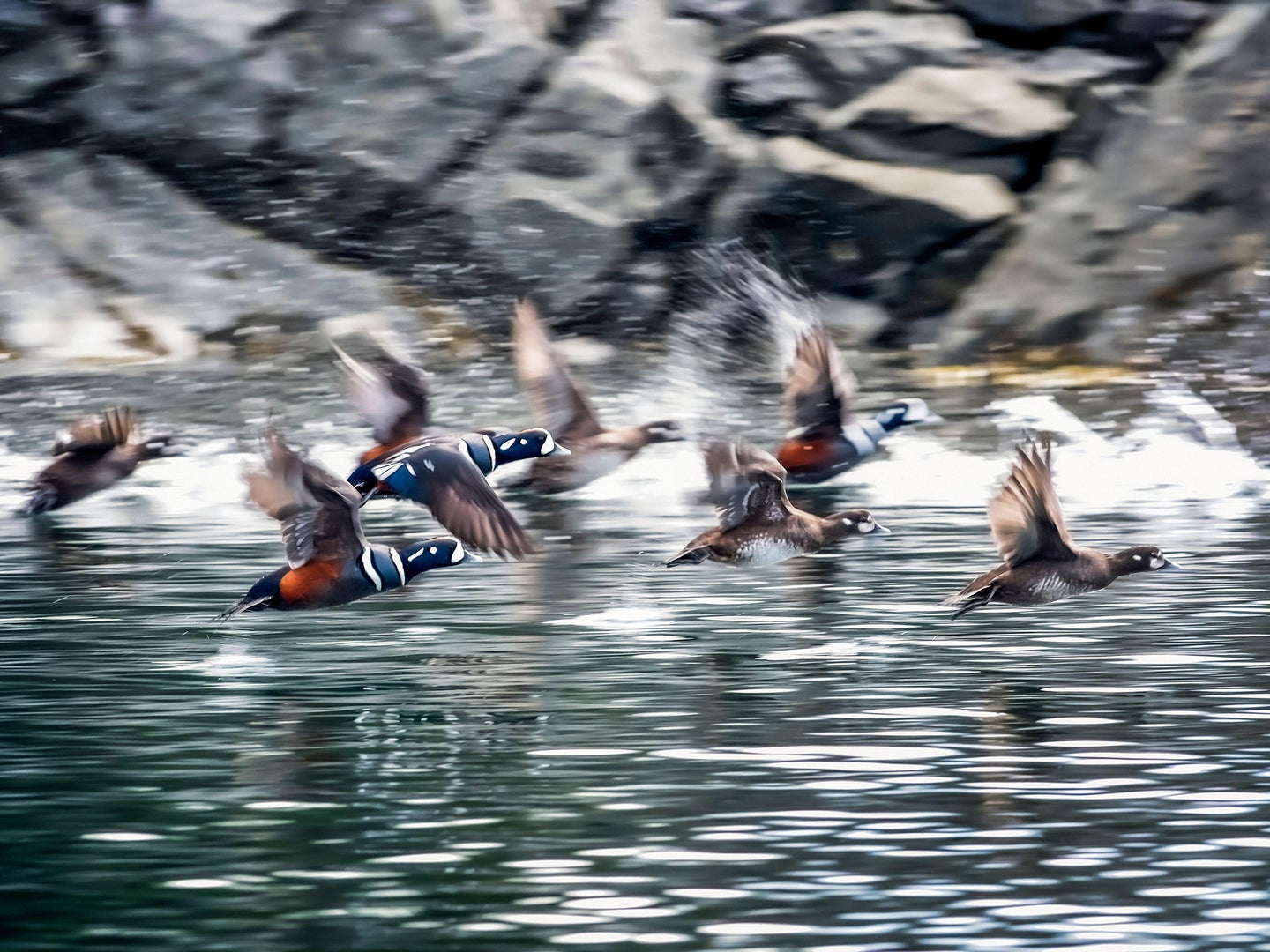 A group of harlequins blitzes across the water in Cold Bay, Alaska. Design Pics Inc./Alamy

In late November, there are simpler—and closer-to-home—waterfowl shoots than a harlequin hunt. But very few are as adventurous, or wild

9:27… I JUMPED into the bay to retrieve the harlequin.

The water appeared calm—until I started tracking the speed at which the current was ferrying my bird. I quickened my pace, as if I were chasing a giant brown trout headed downstream. At first, with the water barely thigh-high, I could move at a pretty good clip. But as the surface rose to my gut, my progress slowed to a trudge. Before long, I was nips-deep, tiptoeing along and watching the drake drift farther away. To cut the distance, I resorted to making these quasi-anti-gravity leaps off the bay bottom, letting the current carry me between bounds as if I were a spaceman hopping across the moon. The maneuver worked like a charm. Soon my bird was just 10 yards away.

But there was still one cause for worry: not knowing how deep my next landing spot would be. Well, that and realizing that the current was moving me toward where I’d seen a pod of breaching humpbacks the day before.

It dawned on me that this jump into the bay was the second leap of faith I’d taken in the past week.

The first leap of faith was simply coming here—all the way from New York City to Cold Bay, Alaska. For reasons that aren’t important, my initial travel plans got cut short. Instead of a five-day duck hunt, I’d now have only two and a half days. I’ve left home for quick hunting and fishing trips before, but none of those required flying a quarter of the way across the globe to a location where unpredictable weather conditions could easily cut my hunt even shorter.

I had only two days to decide if I should still go or not. A small part of me wanted to bag the trip. A larger part, however, recognized the rarity of an invitation to hunt Pacific eiders and Aleutian teal and—most appealing to me—harlequin. What the hell, I decided. Two days, three flights, and 4,300-ish miles later, I landed in Cold Bay. And, to my relief, the weather for the next few days looked promising.

“This place,” Jeff Wasley told me, “is pretty goddamn wild.”

I was in the boat with Wasley, our guide and the owner of Four Flyways Outfitters, on our way to pick up a pair of hunters from the layout boats, when he made this observation. I’ve hunted sea ducks in Maine, and so I thought I might have at least some idea of what to expect out here. I was wrong.

Maine is a puddle-duck hunt compared to this place. Here, the water—cold, deep, and rough—is more dangerous. Here, the weather—harsh winds and precipitation that morphs from rain to ice to snow in a blink—is more punishing. And here, the scale of the landscape—massive snowcapped mountains and volcanoes towering above our decoy spreads—is simply unmatchable.

Damn challenging too. On day one, we ventured far out on the bay to target eiders, long-tailed ducks, and scoters—and with four of us hunting, we didn’t kill a single duck. In-range shots were scarce, and the ones we did get were tough. Even in mild swells, sitting up and shooting from a bobbing layout boat is no easy feat. We didn’t return to camp totally skunked, though. The one lucky hunter in our crew who had a tag to do so killed an emperor goose.

Later that evening, after dinner, Wasley checked the next day’s forecast. The good news: Conditions on the bay in the morning would be ideal for a couple of hours of harlequin hunting. The bad news: Those two hours would be my only chance at a harlequin for the entire trip.

I went to sleep that night hoping I had gotten all of my whiffs from the layout boat out of my system.

We launched the boat into a glass-calm bay the next morning. As we headed toward our spot, all I could think was: Flatter water means steadier boats means easier shots. At least, I hoped it would.

Wasley dropped me and Casey, one of the other hunters, off in a pair of layout boats and set a string of eight decoys off the bows. “At 9:25, you’re good to start shooting,” Wasley said before motoring off. I can’t recall ever being as anxious for a hunt to begin as I was on this morning. Time crawled as Casey and I waited for legal light. Checking my watch as often as I did didn’t help.

9:12… I took a sip of coffee, followed by some deep breaths.

9:17… I loaded up, made one last look around for birds, and lay down in the boat.

9:20… I scooched back in the boat slightly for a better look at the decoys.

9:24… To my left, I heard the harlequins’ clownlike squeak. Any second now.

9:25… Four birds—a drake and three hens—came into the spread. I sat up and fired.

By the time I got my hands on my nearly lost-at-sea harlequin, I was so far from the layout boats that Casey could safely shoot at the next group that flew into the dekes. Two blasts, two splashdowns. I raised my bird in the air to him; he hoisted his 12-gauge in a congratulatory response.

Knowing we were hunting on borrowed time—and that ducks were obviously continuing to decoy—I should’ve returned to the boats right away. But I simply wasn’t in a rush to get back. The moments I tend to savor most in the wild—whether I’m hunting or fishing—are those when I’m alone. This was one of those moments.

I gazed down at the stunning bird in my hands. I’m hardly a trophy hunter. I couldn’t care less about rack sizes; nor do I have a list of animals to check off. So it was somewhat out of character for me to care so much about this one species of duck. I’m not even totally sure when my fascination with harlequins began, but I am certain that it was rooted in a desire to visit and explore the kinds of places—goddamn wild places—where these birds live.

Places like this, where the sun was just beginning to emerge from behind Frosty Peak Volcano. I held up my harlequin to make it part of the scene. The white feathers around its neck and on its face matched the snow-covered slopes. The blue and slate-colored plumage on its wings and body mirrored the calm water and the overcast sky. And, as if to prove that fall’s hues thrive even in a place without maples, aspens, or oaks, the sunrise lent fiery reds, oranges, and yellows to the picture.

I stood there wondering how I could have ever considered not taking those leaps of faith that had planted me first in the wildest place I’ve ever visited, and then in one of the most beautiful. I checked my watch.

9:41… I thought, Plenty of time left to hunt. I kept watching the sunrise as I started back toward the boats, carrying the harlequin I had come here to retrieve.