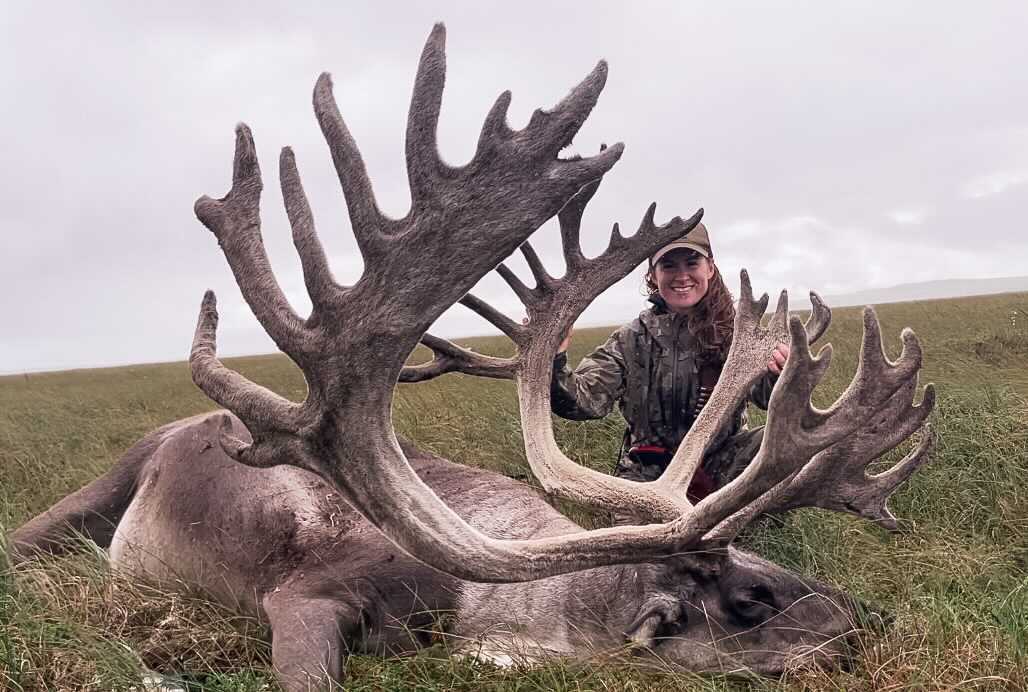 Alaska local Tana Grenda took a beast of a caribou earlier this week. It was her first-ever solo hunt in the remote Alaskan bush—and she made it count. After spending the night in camp, she set out to stalk a big bull she’d spotted in the alders next to a small lake. She’d brought both her bow and her rifle with her because her primary goal was “to get a bull down, fill my tag, get some meat, and get home to my family in one piece.” But as she closed in on the bull, she decided to ditch the rifle and try to take the huge caribou with her bow.

The Caribou Bow Hunt That Wasn’t

Grenda quickly closed the distance from 800 yards to get within bow range. She started belly-crawling at about 45 yards and made it to 37 yards, where she waited. She could see the ‘bou’s big antlers jutting above a patch of willows, where it had bedded. Winds were gusting from 20 to 30 miles per hour. The bull was quartering toward Grenda. Her only shot was a marginal neck shot, which she passed on. The wind shifted, and the caribou spooked and ran in the direction of Grenda’s camp.

Grenda felt a pang of “instant regret” and sprinted back to her rifle, which she’d dropped 500 yards behind her on the stalk. By the time she made it back to her rifle, the caribou was well out of range, but luckily, it turned and circled back toward her and trotted broadside at 350. She couldn’t shoot prone because of how tall the tundra grass was, but she didn’t want to let her chance at a personal-best caribou slip away. She rested the rifle’s bipod on a tussock, half-knelt, and shot the bull at 350 yards. It went another 50 yards then dropped.

Grenda didn’t have a good grasp on how big the caribou was until she walked up to it. The antlers were massive. She taped them at 55 inches wide with 59-inch main beams. It’s hard to get an accurate score because of the velvet, but Grenda thinks the bull will score out between 460 and 470 inches, which is well above the 400-inch minimum to make the Boone & Crockett book. Grenda, who lives in the Alaska bush, is no stranger to giant caribou. Two years ago she bagged a caribou bull that scored 454-inches.

“I didn’t think I would ever get a bigger bull than my other caribou—but I just did. And I did it solo,” wrote Grenda in an Instagram post. “It’s hard to put into words what this hunt meant to me.”

The solo hunt was an intense experience for Grenda, in part because she’d recently had a close call on a brown bear hunt with her brother Trevor Schneider, who put three rounds into a massive boar before his bolt-action rifle jammed. The bear spotted Schneider and Grenda and charged to within 5 yards of them before Schneider stopped the bear with three rounds from a .454 Casull. The experience left Grenda humbled by the power of Alaska’s critters.

“Four months after a bear attack I would not have seen myself being dropped off alone in the wilderness,” she wrote. “I may consistently kill year after year, but none of it would be possible without my right-hand man Adam, answers to prayer, and the people back home who help watch over my kids while I’m gone.”