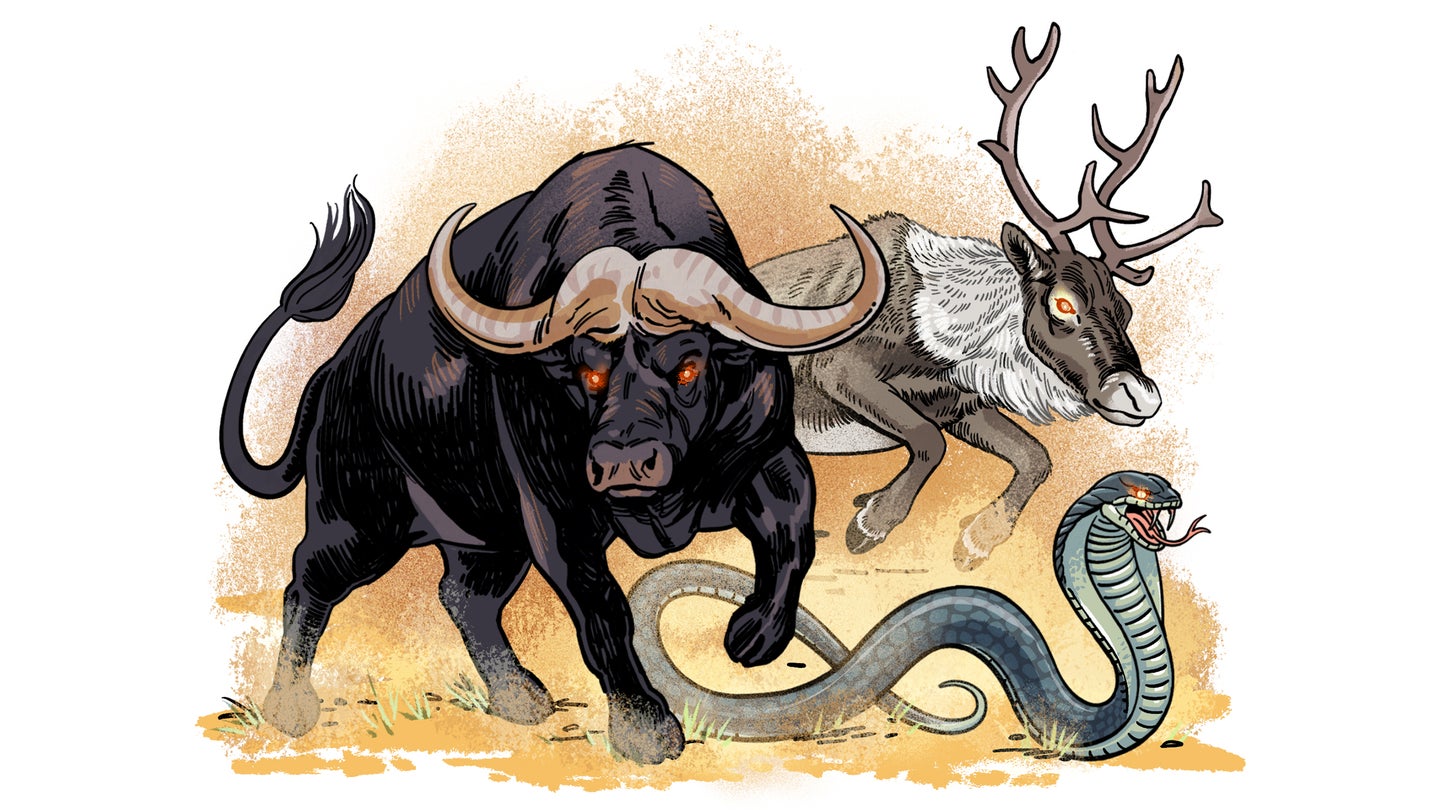 Dangerous Game, Scout Rifles, and the Worst Shooting Advice Ever

In this week's edition of Ask the Experts, Richard Mann answers your questions on rifle shooting, big game hunting, and the biggest mistake people make at the range

This week, F&S shooting editor, Richard Mann, is on the hot seat. He’s got a pick for the best lever gun and cartridge, shares some of the worst advice he’s ever gotten, and reveals what most Internet experts get wrong about the scout rifle. And more.

Q: What’s the closest call you’ve ever had in the wilderness? —Kyle B, via email

A: I’ve had three dangerous encounters while hunting. In 2013, I’d wounded a buffalo in Mozambique. The bull went into the tall grass, and we had to go after him. When we found him, my PH shot him in the horn with his .470 double at about 25 feet. Unimpressed, the buffalo dumped the clutch and charged, and I shot him in the head with my lever-action .45-70.

Before that, in 2002, I’d just shot a massive woodland caribou in Newfoundland. As I approached, the beast jumped up and charged from only about 15 feet. Thankfully, I’d reloaded my muzzleloader. With one hand I shoved it in his direction and jerked the trigger. He dropped 3 feet from the muzzle. In the brief second it took for me to almost piss my pants, my guide had managed to sprint 30 yards, screaming “Run!” with every step.

The incident that shook me the hardest, though, was in 2014. I was back in Africa, hunting eland between the Orange and Riet rivers, when I stepped on something squishy. I thought, That’s odd. And as I looked down, my PH shoved me aside like he’d caught me with his wife. He then attacked the ground with his shooting sticks. I never saw the Cape cobra until it was dead. That’s when my knees went weak. I asked my PH what he’d have done had I been bitten. He said he’d have stayed with me for the hour or so it would have taken for the end to arrive.

A: Assuming you mean a traditional, tube-fed lever-action rifle, as opposed to the Browning BLR, Savage 99, or sexy Winchester Model 88, a top contender would be the Winchester Model 94 Angle Eject in .307 Winchester. I bought the first one I ever saw but traded it for a coonhound during a moment of weakness. They’re discontinued and now almost forgotten, but you can still find them used, and Hornady even offers factory-loaded .307 Winchester ammunition.

However, as far as I’m concerned, the best all-around lever gun and cartridge is without question Marlin’s 1895 in .45-70. Available in several variations with three power levels of factory ammunition, this rifle-cartridge combination is suitable for everything from whitetail deer to African buffalo. I believe every hunter should own a sharp knife, a good pair of boots, a dependable truck, and a Marlin Model 1895 in .45-70.

Q: What can we do about an outdoor culture that prioritizes buying its way to success rather than practicing? —Jacob H, via Instagram

A: You raise a good point, and it is indeed a problem. I think to some extent it’s exacerbated by the lack of time available to modern adults and the fact that many of them lack a mentor. I’m not so sure there’s much we can do; it looks like the train has left the station. Just look at the popularity of long-range hunting, where more and more hunters are relying on gear, gadgetry, and feet-per-second, as opposed to feet-on-the-ground, to get their trophy. However, inflation might take care of this for us. It’s hard to pay for cool gear and canned hunts when you can’t afford gas and groceries. Some folks might actually need to learn how to hunt to keep putting food on the table.

Q: Is Marlin still a good brand under its new ownership? —Steve E, via Instagram

A: What many don’t realize is that back in 2007, when Remington purchased Marlin, the latter was not in good shape. Remington might have saved Marlin, but they did little else to advance the quality of the guns they made. The new Marlin, which is under Ruger control, has released two lever-action rifles so far. The first was the 1895 SBL and the second was the 1895 Trapper, both chambered for the .45-70. I’ve spent a good bit of time with both rifles, and if they’re indicative of what the new red-branded Marlins will be, I expect some of Marlin’s best years could be ahead of it.

Q: What is the worst piece of shooting advice you have been given? —Cameron B, via Twitter

A: The single piece of shooting advice that I most despise is that if your gun kicks too hard, you should get a muzzle brake. These are vile and offensive gadgets that can destroy your hearing, piss off hunting guides, and induce a flinch. The only good they may possibly serve is to clear out the shooting line when you’re at the range so that you can be alone in your misery. If your gun kicks too hard, get a different one.

Q: If you could own, shoot, and hunt with only one gun, what would it be? —Judah Horn, via email

A: I have a 5-pound New Ultra Light Arms Model 20 Short chambered for the .223 Remington. It is topped off with a Leupold VX-3HD 4.5–14X40mm riflescope, has a 1-in-8-twist barrel, and will stack 50-grain Ballistic Tips, 60-grain Partitions, and 70-grain AccuBonds on top of each other at 100 yards. It’s as easy to carry around as a good memory and is as lithe and lethal as a Fairbairn–Sykes fighting knife. It’ll do anything I need to do in West Virginia and a lot of other places. And it was made by a fellow hillbilly and rifle-building genius named Melvin Forbes.

Q: There are a lot of scout rifle experts on the Internet, but you wrote a book on the subject. What do most people get wrong about scout rifles? —Pete Desmond, via email

Q: As a firearms instructor, what’s the biggest mistake you see people making at the shooting range? —Jenna Hopper, via email

A: They don’t conduct enough dry practice. Just because you’re at the range doesn’t mean your gun must go bang every time you pick it up, shoulder it, or press its trigger. Dry practice is a great way to develop gun handling skills. Just like a professional golfer takes a few practice strokes before the real one, you should do the same with any firearm when you’re on the range, and even in the field if time allows. You can learn as much from dry practice as you can from live fire. And it’s free.

Q: If you could go hunting only one more time, where would you go, who would you go with, and what would you hunt? —Adam Shader, via email

Just out from our family hunting camp, a low ridge comes to a point under a stand of mature hickory and white oaks, and it’s where we spread my parents’ ashes. If I knew my next hunt was my last hunt, I’d go there, alone, and hunt for the memories I’ve made on that piece of ground. Memories like hunting squirrels with my mom when I was hardly big enough to carry a gun, like lying beside my grandfather under the stars and listening to our hounds work a cold coon track, like the first buck I killed with a recurve, and the first deer my son killed, when he was 6. I’d stay there—with my father’s old shotgun across my lap—until the sun slipped behind the mountain. Then I’d walk back to camp, in the dark, knowing I’d lived life well and good.

But let me offer some advice. After 50 years of hunting special places with special people, and saying goodbye to too many of them way too soon, one thing I’ve learned is that last hunts won’t tell you when they’re coming. Get everything you can get out of every hunt you take.