The first best day of the 2022 whitetail rut is coming right up. Take advantage with these two killer plans for your morning and evening hunts 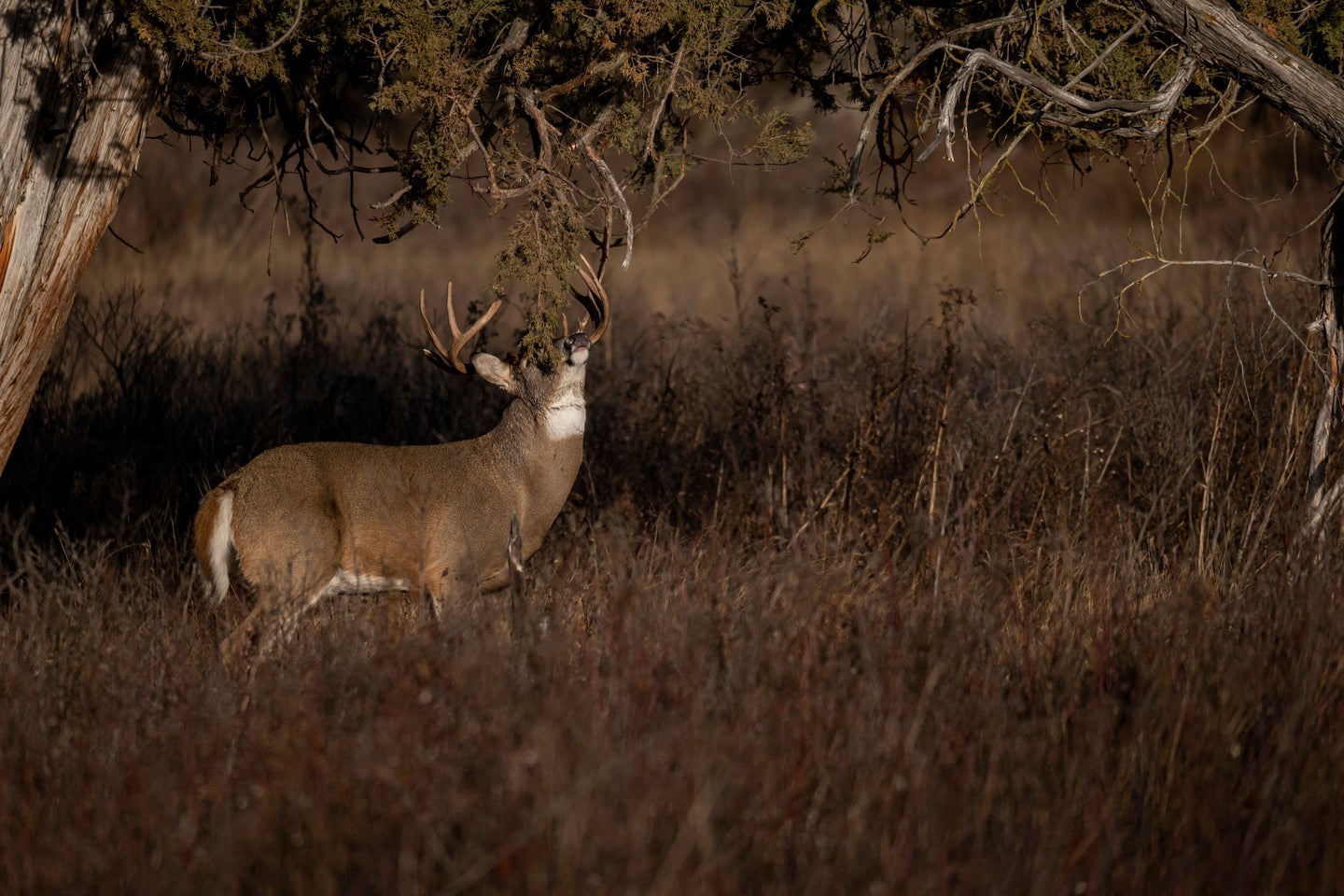 October 23rd is the perfect day to catch a buck working a scrape in daylight. John Hafner Photography
SHARE

Back in September, we revealed the seven Best Days of the 2022 Whitetail Rut, and the first day is coming up is weekend, on Sunday, October 23. In other words, it’s time to clear the calendar and start making a hunt plan. We’ll leave the first part to you, but we’ve got you covered on the second. Below is a breakdown of the buck activity you can expect to see on Sunday, as well as expert tactics for both the morning and evening hunts. The first best day of the 2023 whitetail rut will be here before you know it, so read on if you want to be ready.

Outside of a few rare exceptions, the onset of actual breeding has yet to occur, but bucks are feeling a major surge in testosterone and are as active as they’ll be all year within their home ranges, trolling scrape lines and thrashing rubs with increased intensity and duration. While rubbing and scraping have been happening since velvet shed, that early sign-making has been parenthetical to normal feeding and bedding activity. Now, bucks are becoming less focused on food and increasingly obsessed with advertising their presence and checking out the competition. And more ornery, too. Bucks that had tolerated each other for much of the year can get really testy toward the end of October. They also spend a lot more time on their feet, and often during daylight hours. A buck that lived like a vampire for the last three months can show up at a food plot full of does an hour or more before dark now and is apt to be late getting to bed, as well. Which can only mean better hunting for you. Here’s how you should take advantage.

If you’ve been hunting your mature bucks gingerly in the early season by avoiding morning hunts anywhere near his bedding area, that’s great. But now is the time to start slipping the gloves off—gradually. It’s not yet time to invade his sanctuary, but now is a great time to go in a midday and stealthily hang a stand on a trail or funnel leading back to his bedroom—because Sunday morning is when you’re going to catch him getting back to bed late.

All through the early season, bucks have a maddening habit of heading back to bed before daylight, which can make it really tough to intercept one in the morning. It can happen, but the odds of it working out are usually quite low, while the likelihood of spooking that buck on your way in are pretty good. But now, with bucks occupied later into the morning with sign-making and checking out any does that will let them, they are much more likely to show up after you’re in your stand, bow at the ready.

This weekend will mark my first morning hunt of the young season, but I won’t push my luck though. I never pull any long sits at this time (those come later), and I’ll only call or rattle to deer I see. In other words, it’s a low-risk, high-reward kind of hunt. If the buck you’re hunting doesn’t make a mistake Sunday morning, you haven’t warned him that you’re after him. If he does, you might just tag a whopper.

Setting up in staging areas—thick patches of cover just off the hottest evening food sources—is an absolute killer plan right now. In fact, staging areas are great throughout the early season, so if you’re tuned into a few, this should be easy. The key now, however, is to set up specifically in staging areas with the the best buck sign. Spend a midday or two doing a milk run of your best feeding areas and do some quick speed-scouting. Find the best entry trails to the food and walk them back a little ways into the woods, looking for the places where bucks linger and lay down sign before trotting into the groceries. While young bucks might expose themselves in plots and farm fields with plenty of shooting light, the old timers are still reluctant. Instead, they’ll hang back in the staging area and work off some adrenaline freshening scrapes and making rubs. Find that hot sign, and then set up so you’ll be waiting for them on Sunday evening.

Part of the reason why Sunday is the first best day of the rut is because it sits right smack in that period many experts have come to call “scrape week,” a roughly five- to seven-day period when bucks are actually hitting scrapes in daylight—which makes this the absolute best time to kill a buck over an oval of bare dirt. As your checking potential staging areas for your evening hunt, be sure to also check any historical scraping sites and recheck any scrapes you’ve found earlier in the year. You’re looking for the absolute freshest sign, and you should pay special attention to clusters of scrapes, which indicate multiple visits by the same buck, or competing sign from satellite deer. Determine if the site is best hunted in the morning (close to thick cover or preferred bedding cover) or evening (in staging areas near hot food sources) and plan on sitting it immediately, in conjunction with the two tactics above.

Gear Tip: Set Up a Cell Cam to Time a Scrape

The absolute best way to know if bucks are hitting scrapes in daylight, and which ones, is to set up a cellular trail camera right on the sign. One of my favorite cell cams for this purpose is the new Moultrie Mobile Edge. Why this one? Simple: It does a great job at a super-reasonable price (about $100 or a little less if you buy two). Obviously, the more scrapes you can monitor the better, and the price of the Mobile Edges lets you put up twice as many cameras as you would with a more expensive model.

If you don’t have scrapes located, get those scouting boots on and find them now. Then make additional mock scrapes around them, which creates competition among bucks and the illusion of an intruder. Then slap up a cell camera, like the Edge, to monitor activity. A cell cam keeps you from having to disturb the area to check a card, of course, and it gives you real-time information. What you’re looking for are bucks that are suddenly hitting scrapes during daylight, and this cam with alert you to that instantaneously.

The other thing I like about the Edge is that the app is pretty ingenious. In addition to making setup easy, the app also has some slick features, like activity charting (for figuring out the best times to capture buck visits to a scrape, for example) and weather data (how temp, barometric pressure, and precipitation affect daytime scrape visits). This saves you tons of time sorting info and images from conventional cameras. All of that will help right now, during this season’s scrape week, but you can also start amassing data for next fall—and future falls—so that instead of being yet another frustrated scrape hunter, you’ll be able to pounce on scrape week the minute it kicks off.