The Best Days of the Strut 2022: We Pick 7 Dates When You Need To Be in the Turkey Woods

The best time hunt turkeys is when they're gobbling, strutting, and coming to calls. In other words, these 7 days, chosen by some of the country's top gobbler hunters 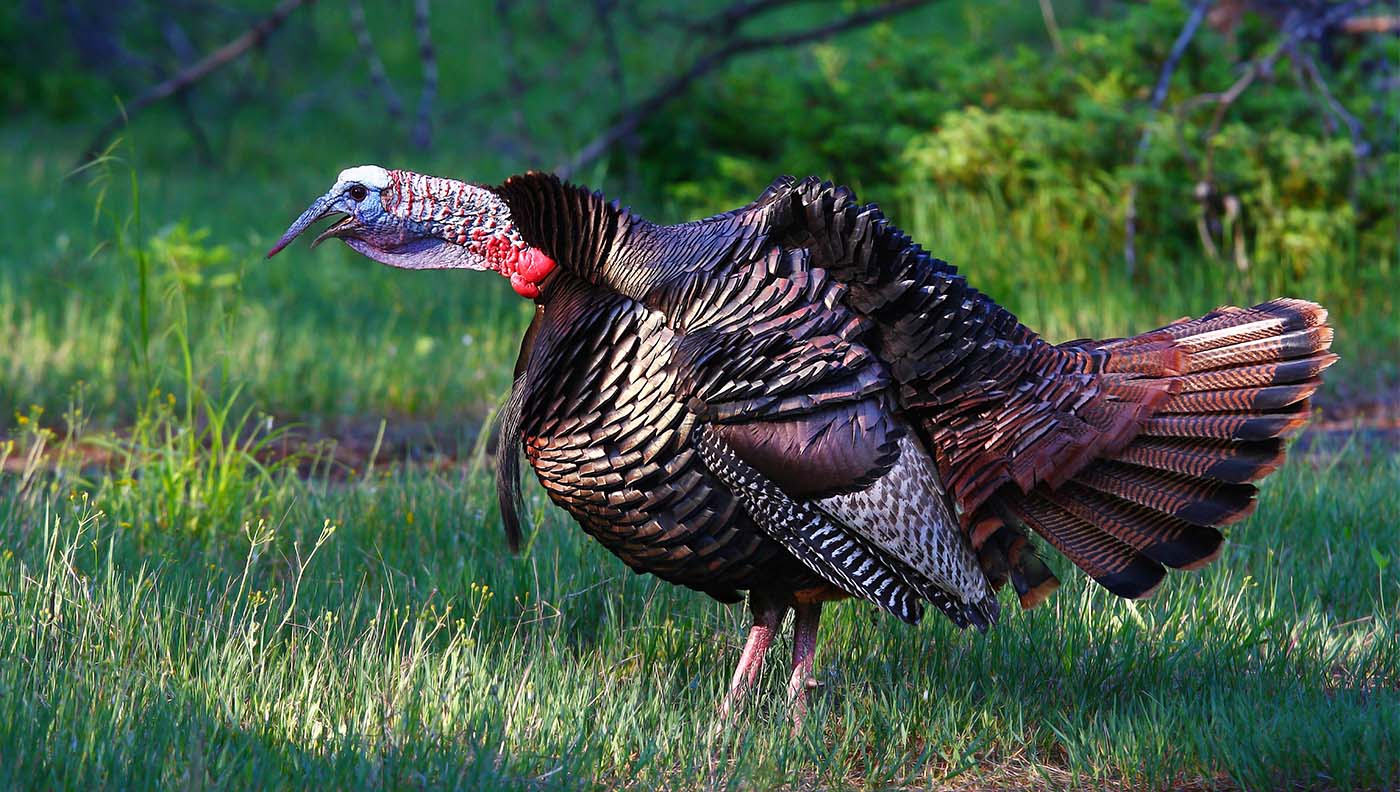 A spring gobbler stretches its neck and sounds off. Getty Images
SHARE

The fact that my March Madness bracket has been busted for over a week isn’t going to keep me from making more predictions. But this time I’ll turn to a topic that I actually know something about. That is, wild turkeys and the somewhat-predictable nature of their breeding cycle—and therefore, when and how we should hunt them.

As an opening salvo, I spotted a strutter this morning, earnestly doing his best to impress a small gaggle of nearby hens. The body posture of those jennies said they weren’t interested, but the tom was undaunted and continued to flex and pose and turn in what he obviously thought were sexy circles. If I’d had some camo and calls in the truck, I could have yelped that strutter in and killed him with a stick. Except that the season here in Minnesota is still three weeks from opening. Sigh.

But it made me think, some days turkeys are just in the mood to play the game—and when they aren’t you’d swear they don’t even exist. Almost 40 seasons in the spring woods has taught me that it’s far better to focus your efforts on the handful of days when the hunting is on fire and spend the rest of your time trout fishing or deer scouting or catching up on sleep. Naturally, weather and the maddening unpredictability of turkey behavior can mess with even my most finely-tuned predictions, so I’ve reached out for a little help, by putting some of the country’s best turkey hunters on the spot. You’ve got nothing to lose, as we are offering the same full refund as last year. Still, I think you’ll have better luck collecting a big spring tom if you just heed our advice and get in the turkey woods on these 7 key dates.

Those lucky bums in Florida have been getting after birds for a couple weeks now, but for hunters across much of the South, openers have been bumped back to allow turkeys a longer breeding window without hunting pressure. This is in response to generally lower bird numbers, but rest assured that here are still plenty of gobblers to chase, and it’ll be a good idea to get chasing as early as you’re allowed.

That’s the tack Grand National Champion caller Ricky Joe Bishop is planning to take for the opener of the Georgia season. “We’ve traditionally opened in late March, but this year’s April 2 opening day should be really good,” Bishop says. “Our populations are down some, so, in addition to dropping our bag limit to two birds, the state has changed up the season dates some. I don’t mind the timing a bit, as I think things will be lining up perfectly, weather-wise. In March we get some nice warmups, but those are punctuated by cold, rainy spells that can knock the bird activity back. I expect that the opener will be that perfect window when the weather is consistent and things are just getting going for real, with gobblers talking a lot, looking hard for other turkeys, and being active throughout the day.”

If you can catch opening-day or early-season toms when they’re gobbling and strutting to unresponsive hens, that’s always a good bet. But just about as good is the window a little later when hens have been bred some and are devoting serious time each day to laying an egg and sticking close to the nest. This can be early- to mid-April in the south or as late as mid-May much farther north. And when it happens in the part of California that call maker and veteran hunter Joe Slaton calls home, he’s a happy hunter.

“I’ve thought about this a lot, actually,” he says. “If I had to pick a week, it would be any time from April 7 through the 15th, with my favorite day smack in the middle. By then the breeding here has been going on for a bit, so the gobblers are really in that groove, where they wake up looking for a hen immediately, but enough hens are starting to or are already sitting on nests that they’re typically not running to gobblers like they did earlier. So the toms have to work a bit, and they’re usually very vocal. Plus the weather is almost always perfect here, so it’s just a nice time of the year to be out.”

As we move into the middle of April, a whole bunch of states in and around the middle of the country start opening up. Farther north, where hens may still be giving toms a bit of a cold shoulder, you can have some great early hunting. As you move south, hens may be practically glued to some toms, but that will leave plenty of other gobblers still vulnerable, according to Phillip Vanderpool, who lives in Arkansas and hosts The Virtue TV show.

Vanderpool, who has chased gobblers in the Ozark Mountains near his home for decades, loves their mid-April opener. Although bird numbers are down in his state, lower densities place an even greater emphasis on being first out of the gate. While hens ready for breeding will be focused on dominant gobblers, that just means younger toms can be ripe for the calling.

“Assuming we’ve got good weather, the opener is the time, to go,” he says. “I really like it because sub-dominant birds will still be in little packs, and they’ll be looking for any hens not getting attention from a boss gobbler. They like to mix it up with each other. That just means that aggressive calling from a range of calls can equal success.”

Weather can impact turkey hunting success as much as any influence exerted by the breeding cycle. Not only are turkeys more active on nicer days, but it’s also easier for us to exert greater effort hunting them when the sun is shining, temps are pleasant, and the wind isn’t howling. Remember, the gobbler breeding season has peaks and valleys, with multiple, short windows of opportunity. If the weather is good, there’s simply a better chance we’ll be out there to take advantage.

That consideration leads Mark Scroggins, Marketing Director for Woodhaven Game Calls and head guide at Rush Creek Guide Service, to choose early May for his top time in Texas and Oklahoma. “I often get asked if I had to pick one week to hunt during the season, and my answer is alway the same: the first week of May in Oklahoma and the first two weeks of May in Texas. The weather has usually stabilized by then, and you have consistently warm weather. Also, by this time of the season, there are definitely more hens sitting on nests. It’s true that birds have seen more hunting pressure by then, but I have found that I’d still rather hunt late-season birds with no hens that have had some pressure over henned-up gobblers at the beginning of the season that have had no pressure at all.  In my country, hens control everything!”

Gobblers are funny, in the most ironic sense of the word. In the first blush of the season, they’re often so eager to breed that they’ll run to a call. Then, as breeding peaks and they realize willing hens will run to them, they seem to barely move at all. This luxury seems to overtake them even when hens are nesting and showing little-to-no interest in them any more. But if you wait, sometimes just a few days, the tables turn, and things come full circle.

For that reason, Missouri call designer and turkey expert Tad Brown likes the tail end of Missouri’s three-week season. “Sure, some gobblers have been killed, so I know I’m going to hear less gobbling than I might earlier in the season,” Brown says. “The difference is, when I make a gobbler talk now, I know there’s a higher likelihood that he’ll come to a call. Most of our hens are serious about nesting by now, and gobblers just aren’t having them run to them like they did earlier. There’s a couple-day window when toms don’t seem to get it—that if they want to breed a hen, they’re going to have to move their feet a bit—and that can be pretty frustrating. But typically that period is over by our last weekend. If you can get one to respond, he’s coming.”

Some of the best turkey hunters I now keep it really simple. And one of the simplest bits of advice I’ve heard, and something that every hunter in every part of the country can put to use is this: When the weather is nice, birds act better. Sure, there are those nice days when you can’t buy a gobble. But by in large, this is true, and it’s what leads Kansas guide Tim Clark of Red Dog Outfitters to pick May 10th as one of the best days of the strut.

“I don’t think there’s a bad time to kill a turkey here; it’s just a matter of patience and patterning,” he says. “So to me, it comes down to things like the weather, and the period just after the first week of May is when it’s really nice here. Early in the season (we open in mid-April), you can have snow and all kinds of nastiness, and later in May we can have some vicious thunderstorms and even tornadoes that boil up in the afternoon. But, man, right around the 10th of May, it’s usually just beautiful, and the turkeys are acting right. It’s the perfect window.”

It’s not uncommon for hunters to cuss hens and their often-maddening influence on gobbler behavior, and many days we wonder just how good the hunting would be if the hens disappeared. The answer, of course, is that it can be really, really good, assuming your state is open long enough for hunters to enjoy that post-breeding period.

New York call maker and videographer Tyler Breen enjoys just such luxury in his home state, where turkey seasons stays open until the end of May. “Actually If I could really pick my favorite day it would be anything in June, but that would eliminate most states, including mine” Breen laughs. “We had some of the best action of the year in early June in Maine, but most states are closed by then. So I’ll go  as late as I can in May. The hens are definitely nesting, and unless there’s an odd hen still breeding, the gobblers are getting back together. If you can find one acting anything like a breeding turkey—gobbling, strutting, even walking around with a red/white head–you can kill your biggest, oldest gobbler of the season.”