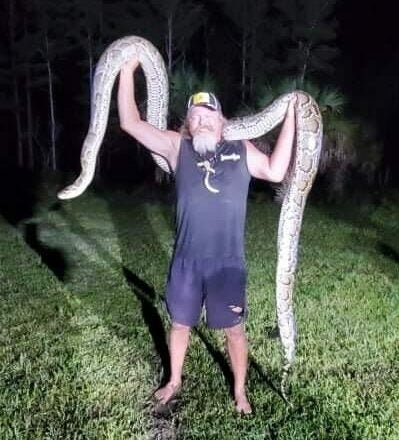 Dusty Crum hoists the giant Burmese python he and his team caught to kick off of the 2021 Florida Python Challenge. Dusty Crum photo via Facebook
SHARE

Florida’s 2021 Python Challenge got started in a big way, with one team of six wranglers capturing a 16-foot Burmese python in the Florida Everglades Saturday night.

The 10-day competition offers a total of $10,000 in prize money for professionals and novices alike. The point of the event is to focus on controlling, if not reducing, the population of the non-native snake in the Everglades. Burmese pythons have established a foothold in south Florida, and researchers with the U.S. Geological Survey (USGS) say that they are “one of the most concerning invasive species” in Everglades National Park. The snakes have no predators and reproduce rapidly, thereby posing a serious threat to the Everglades’ ecosystem.

On the leader board are Dusty “The Wildman” Crum and Luke Carlisle, who are Python contractors with the South Florida Water Management District (SFWMD). Also on their team is SFWMD assistant Ed Musgrave and Carlisle’s teenage nephews, Andrew, Jacob, and Luke Carlisle.

Crum got involved in python hunting when he began to understand how much damage they did to other native animals in the region. “It broke my heart, and I knew I couldn’t do anything else but help stop the invasion,” he told the South Florida Sun Sentinel, according to Newsweek. “I’m looking for these big egg-laying females because, to me, it’s more important—that’s future generations of snakes you can stop with one capture.”

At the 2020 Python Challenge, 80 snakes were removed with the longest being a 12-footer. The 2021 event in the Everglades ends on July 18th.