Best of 2022: Snowstorms and Superstitions 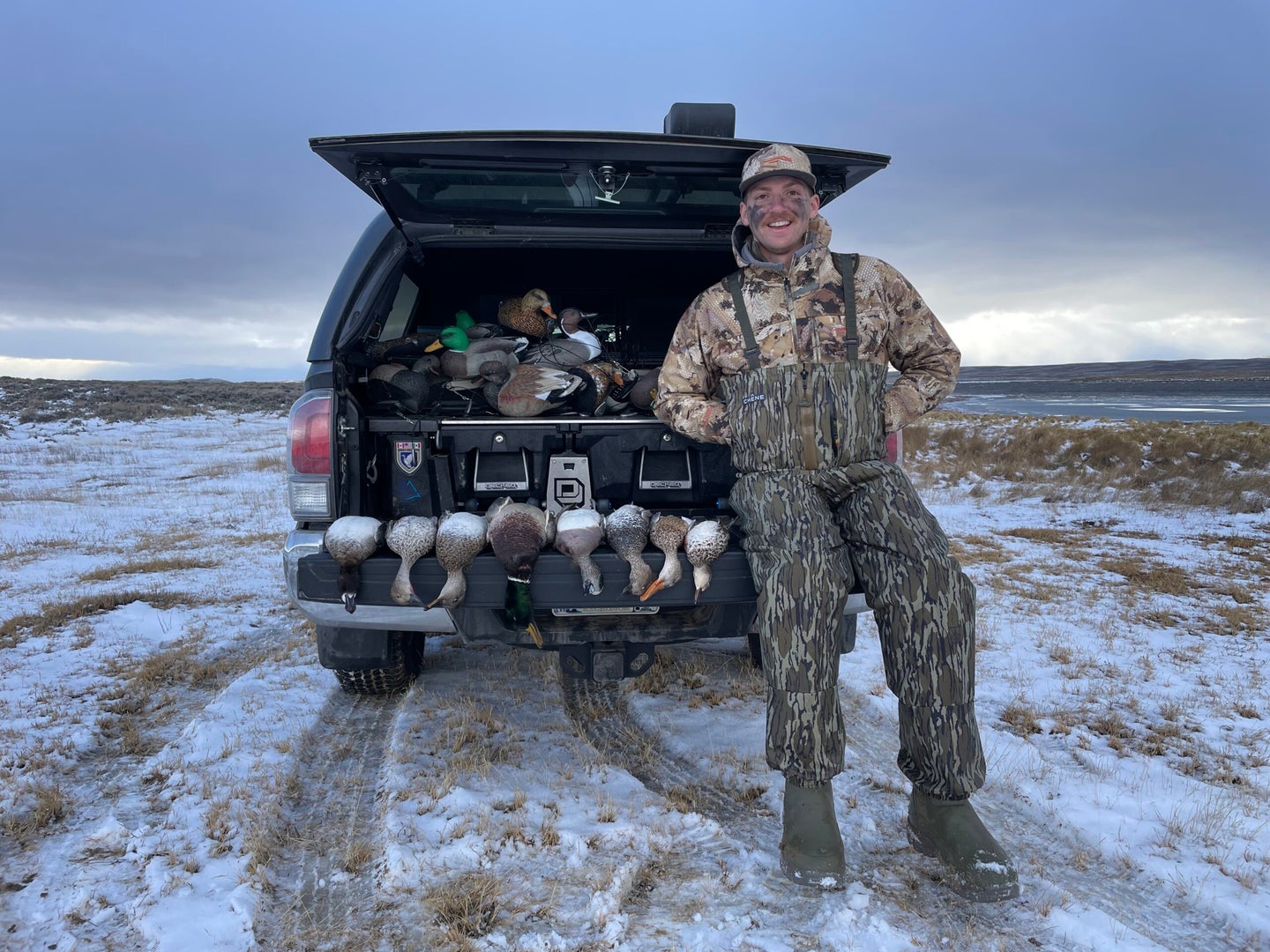 The author is proud of his mixed bag haul. Ryan Chelius
SHARE

The forecast didn’t call for snow—but somehow we found ourselves in a blizzard. My buddy Max white-knuckled the steering wheel the whole way through the mountains, as we both questioned our decision to go duck hunting. Hell, we didn’t even know if there was enough water to hunt where we were going, let alone if there were any birds there. But if we’d learned one thing through the first two weeks of a month-long hunting binge, it’s that the worst conditions yield the best hunts. So we kept going.

We drove three hours north from Denver—near the Colorado–Wyoming border—only to find that the refuge we e-scouted was frozen. Each pothole we checked was a sheet of solid ice, and the only thing in the sky was snow and a lot of it.  “Turn the truck around,” I told Max. “Let’s go home.”

But he insisted that we check one more reservoir before heading back to Denver. I told him we were wasting our time, then threw my seat back and took a nap.

A half-hour later, I woke up to Max yelling, “They’re everywhere!”

They were ducks—and they really were everywhere, clouds of them trading back and forth. The 40-mph winds had kept a larger reservoir open, and it seemed like every duck in the county was using it. Even better, it was all public land. Max threw the truck into four-wheel drive and ventured down the snow-packed trail. As we approached a point, we kicked up a big group of ducks—mallards, gadwall, widgeon, shovelers, and teal.

This was the spot.

“Maybe today is the day you get your pin—”

“Stop,” I said, cutting him off. Not everyone knows this about me, but I am innately superstitions. Just like you never mention a perfect game to a pitcher while he’s in the middle of one, you should never mention the species of duck your buddy has been chasing for 12 years—even if you you know there’s a good chance he could shoot it. At least, that’s how I feel.

I slung the decoys over my shoulder and waded out to set our spread. The snow had gotten heavier and firmer—more like small pebbles than fluffy flakes. I sloshed through the mud, sinking up to my thighs at points, and battled the wind and snow to get back to the shore. We tried our best to hide, but it was pointless. The snow-covered shoreline made for the worst concealment imaginable. But it didn’t matter: The birds wanted in, and nothing was going to deter them.

I struggled to hear Max through the wind, but I had a feeling a duck was coming in. I looked up into the snowfall and spotted a gadwall emerge. It squared up perfectly as it came into the spread. I mounted my gun, and the bird fell. The action only got better from there. We saw buffleheads, bluebills, redheads, canvasbacks, and virtually every puddle duck…except one—the one whose name I wouldn’t let Max utter.

I was fidgeting around in the blind bag to find hand warmers when I heard Max yell, “Right here!”

I looked back, and there were two ducks hovering over the decoys. I grabbed my gun and shot the bird on the right. It folded. Max whiffed on the other duck, but he waded out into chest-deep water to retrieve my bird. As he walked back, he yelled that he wasn’t sure what it was. But I could see its lanky neck from a distance—and right then, I knew.

Max handed me the bird, and I started jumping around and hollering like a kid at Christmas. “What is it,” Max asked.

“That’s a hen northern pintail!” Max gave me a big hug, and we replayed the shot all over again. I couldn’t believe it happened. Some days, I still can’t.

The snow was coming down even harder now, and neither of us couldn’t see very far past the decoys. Then overhead, I heard the unmistakable whistle of the bird I’d been after for a dozen years. I looked at Max and said, “Maybe it’s your turn to get your first pin—”

But he cut me off right before I almost broke my own rule. Guess I’m not the only superstitious duck hunter.