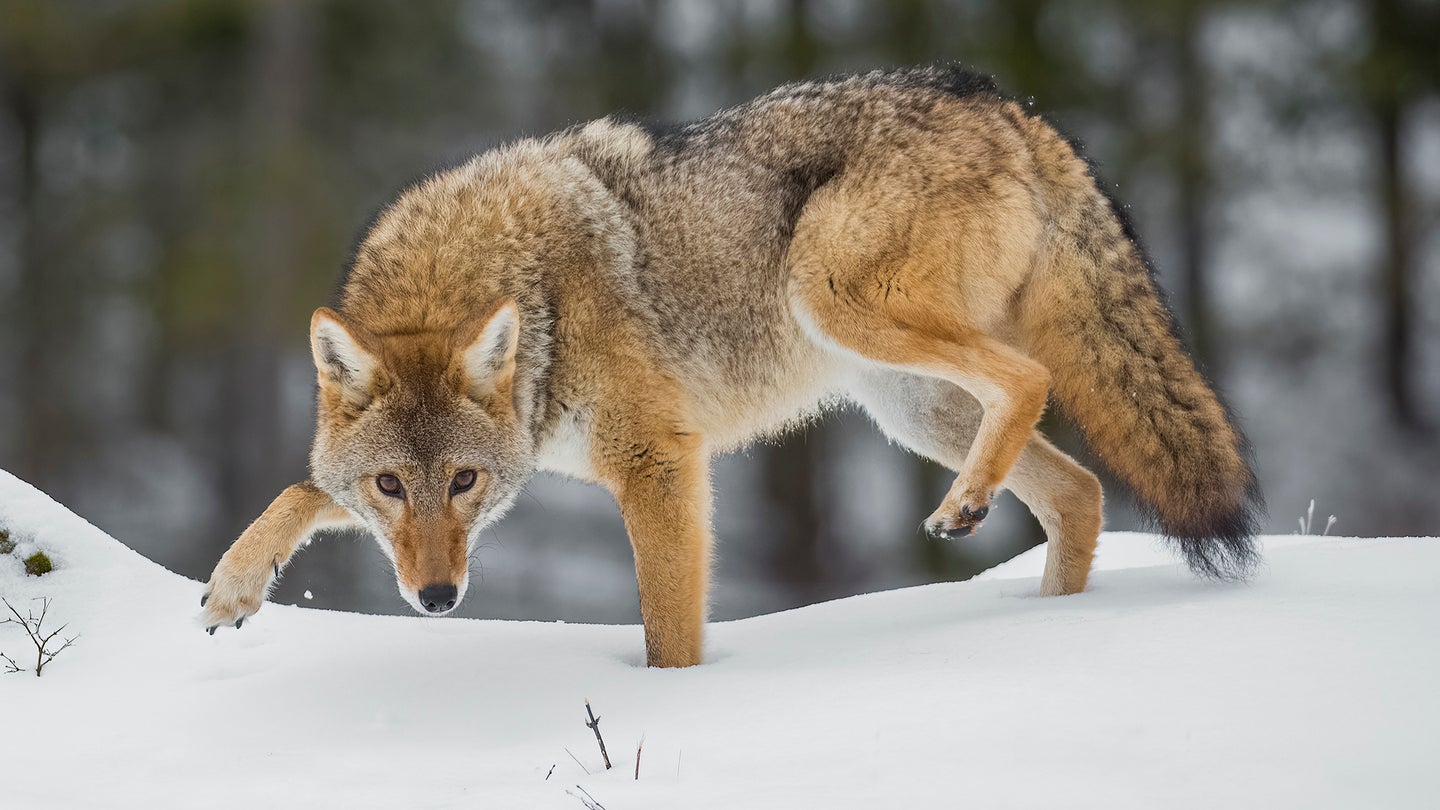 A prowling coyote steps carefully through the snow. Lon Lauber

Yes, they prey on deer, game birds, and livestock. But the truth is, life in the woods would be boring without coyotes

THE COYOTES were there to kill me. That’s what I believed at 12 years old, as I waited in the dark in a wooden treestand, alone and armed only with a sluggish compound bow that I couldn’t shoot all that well. I had no flashlight, no phone, no radio—nothing to depend on other than my dad’s word that he would come back to get me after legal light, once he’d climbed down from his own stand.

But legal light had been over for a while, and the maniacal howls and yips of coyotes were all around me. They’d emerged from unseen dens on Mount Hebron Ridge, a place that was wild and scary enough in the daylight. As it went in my head, they’d already surrounded my dad in the dark, quietly, then attacked him as he was removing his climbing stand from the tree. There had been at least five of them—maybe 20—and though he’d tried to fight, they’d ripped him to pieces and eaten him right there. No other reason he’d be so late picking me up.

But then I heard the four-wheeler and saw its light. The engine shut off 30 yards from my tree, and I wailed, “DADDEEEE!”

“Will, be quiet!” he said from the darkness. When I saw his flashlight shining at the base of my tree, I nearly jumped down into his arms. “I told you it’d be 10 minutes after dark before I came to get you.” By then, I knew our chances of survival were good. Dad laughed.

“You hear all those coyotes?” he asked.

Here There Be Coyotes

To a boy learning to hunt alone in the Eastern timber, a coyote is the ultimate villain. My buddies and I felt under constant threat from marauding packs of the canines that sulked about in caves by day and emerged at nightfall to eat children. We never went to the woods without our pellet guns. The .177-caliber pellets—especially the pointed ones—would kill a coyote if you hit him between the eyes and had made sure to pump your gun up 12 times (two more pumps than the maximum recommended in the owner’s manual). We didn’t know that from experience, but my buddy Dan knew of another kid at school who said he’d done it.

The coyotes left behind sign—tracks and scat with crushed bone and fur—and they taunted us at night with their howls. Yet they seemed nearly as elusive as the bears, wolves, and mountain lions that were also rumored to be in the area but actually weren’t. As I got older, I realized that a nest of ground hornets was more of a threat than coyotes during the average walk through the woods—and that just two or three howling coyotes can sound a lot like 10 or 12. But still, they were the villains for other reasons—they’re the biggest predators around, responsible for eating deer fawns and all the quail too. They preyed on the farmers’ calves in the spring and made the horses nervous. We had a bird dog go missing, and coyotes, we assumed, had killed him.

A critter so mysterious is easy to blame.

I never even got a good, close look at a coyote in the wild until after I watched people calling them in with rabbit-in-distress sounds on a hunting video. I bought a predator call of my own, sat on the edge of a picked beanfield one cold winter evening, and brought a coyote out of a nearby thicket shortly after making the first awful sounds. I missed that coyote clean, shaking like I was. A deer flagging away may yet stop to stomp and snort, and that sometimes gets it killed. But the coyote had the look of something that recognized a near-fatal mistake and would not make it again. I understood right then that hunting them would simply be more difficult than hunting anything else.

More than 20 years later, I still don’t think there’s any critter warier or craftier than an Eastern coyote. I enjoy trapping them now more than calling them because there’s less luck involved. A kid with a $10 call can beat the odds and call up a coyote on occasion. On the trapline, your skill set determines where a coyote puts his foot or doesn’t. But as you learn, you can repeat your successes.

The biggest coyote I’ve ever seen was also the most elusive. His scat and tracks would be in the dirt roads coming and going on our farm, crossing the pond dam we fished, and right in front of the deer stands we hunted. The tracks were unmistakably large, and in the trail-camera pictures of him, always deep at night, that coyote was half again bigger than you’d expect any coyote to be. I ran traps for a full season without catching him.

One day the following winter, though, I found his track at the edge of one of my dirt-hole sets. He had paced around it—curious about the piece of bait I’d dropped in the hole above the trap pan, but recognizing something dangerous too. I figured he would circle the set again that night, so I bedded another trap exactly where he’d paced, but with no additional scent. I put it there to catch him purely by chance, in a spot where he was comfortable stepping. He was there the next morning, caught on the back foot. He stared at me with black eyes, not cowering or sorry. Just beaten. I have his fur, soft-tanned and on display—the definition of a trophy, but also a reminder of a chase I won’t get to enjoy again.

Just the other day—early fall—I found fresh coyote scat on a dirt road through the farm, not far from where I caught that big male. I’d be happy to find a buck rub or turkey scratching while out and about. But I love knowing the villains are out there too.