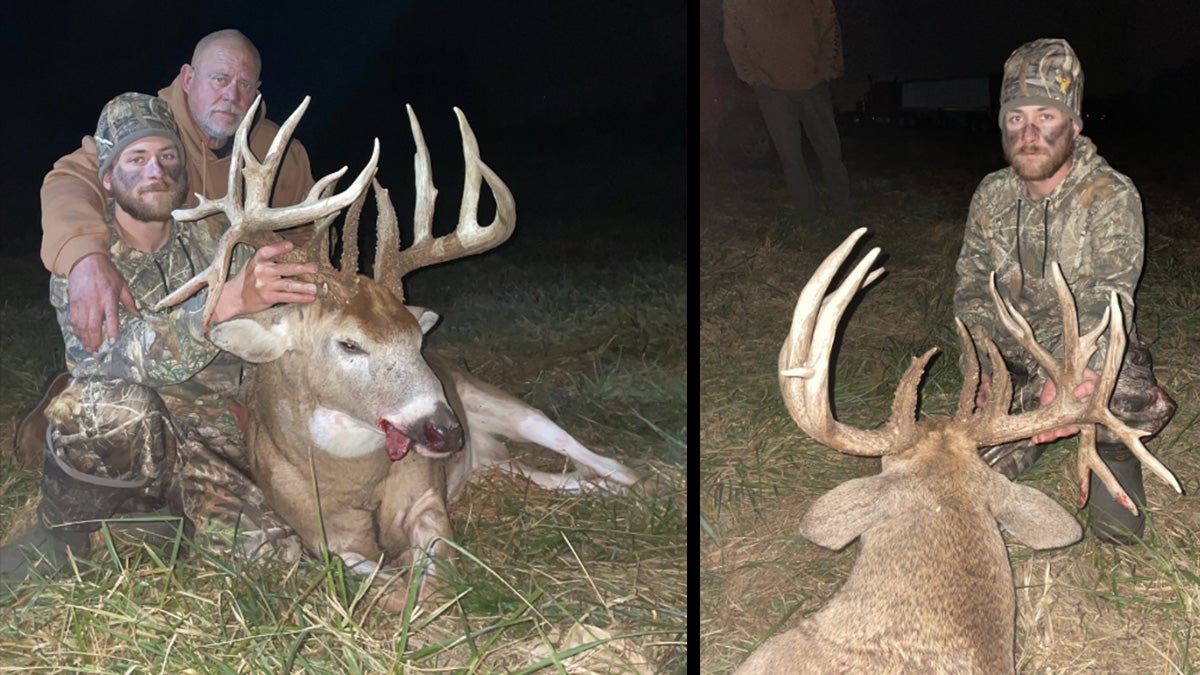 The buck's right side is especially impressive. Clint Congrove
SHARE

Clint Congrove, 24, was hunting a neighbor’s farm on the evening of October 28th when he connected with this buck of a lifetime.

But it wasn’t the first time Congrove and the buck crossed paths.  The deer first appeared in trail camera photos taken on his family farm in August of 2019, but the buck was nocturnal and didn’t visit the property frequently. Congrove said the deer had 15 or 16 points and knew it was well worth pursuing. He started knocking on doors to gain access to other properties.

His persistence paid off when he finally saw the deer while hunting a neighboring property during the 2019 muzzleloader season. But he didn’t shoot the buck. “When I saw him that first time he was all busted up, so I let him walk,” he tells F&S. “He was definitely a fighter because every year that he came back to the farm and I had cameras on, he was always busted up.”

Congrove didn’t see the buck in person again for the next two seasons but continued to learn about its movement through trail camera pictures. “I think he summered and wintered on that farm where I saw him the first time, but he always left in the middle of October like clockwork,” says Congrove.

This year, Congrove gained access to a small patch of woods on another property to see if he could locate the deer during the rut. But just like in previous years, the buck vanished in the middle of October. Congrove thought he had slipped away again, and even took his cell cams on the property down. However, he didn’t abandon all hope. “Luckily, I put a couple of regular cameras up, and when I went to pull the cards, he was in there multiple times a day, every day,” he says.

After getting pictures of the buck during daylight on the morning and evening of October 27, Congrove knew that he just had to wait for the right moment to hunt. But he didn’t have to wait long. “I was taking off crops the next day and paying attention to which way all of the crop dust was blowing,” he says. “It was a perfect wind for that tree stand, so my dad said that he’d take corn off for me while I hunted. He knew how much this deer meant to me.”

About two hours after Congrove got into his stand, a large group of does filtered through the woodlot he was hunting. As two of the does made their way towards him, he could tell that they were distracted by something in the cut bean field behind him. When he turned around to investigate, “that buck was walking down the woodline,” says Congrove. “He circled the perimeter and almost got downwind of me.”

Fortunately, the buck noticed the two does before winding the hunter, and it headed straight toward them—and Congrove’s stand. Congrove got his crossbow up and before he knew it, the buck was at 28 yards, perfectly broadside. “Normally I take my time shooting, but I honestly had buck fever so bad that I didn’t really think about the shot,” he says. “As soon as he was in range, I let one fly, and thank God it was a perfect shot. He ran about 15 or 20 yards and expired.”

Congrove’s huge buck grossed 212 1⁄8 inches with a seriously impressive frame, incredible mass, and great character. Plus, the right side of the rack has a drop-tine coming off the G2, a forked drop-tine branching off of the main beam between the G2 and G3, pearling on the brow tines, and tons of stickers. Congrove estimates the whitetail deer was 6 1/2 or 7 1/2 years old and almost 300 pounds on the hoof, considering it took four guys to load it into a truck.

Congrove’s hunt demonstrates the value of patience, persistence, and timing. He knocked on doors, monitored the deer’s movements, and dropped everything to get into the woods when the moment was right. But in the end, Congrove credits his dad, who covered for him on the farm so he could pursue the buck. “He’s one of the main reasons I got this deer,” Congrove says. “If it wasn’t for him, I wouldn’t be able to hunt and fish all of the time as I do, because he’s always there to have my back.”