Behind the Shoulder or Right at It? A Deer Hunter’s Guide to Shot Placement 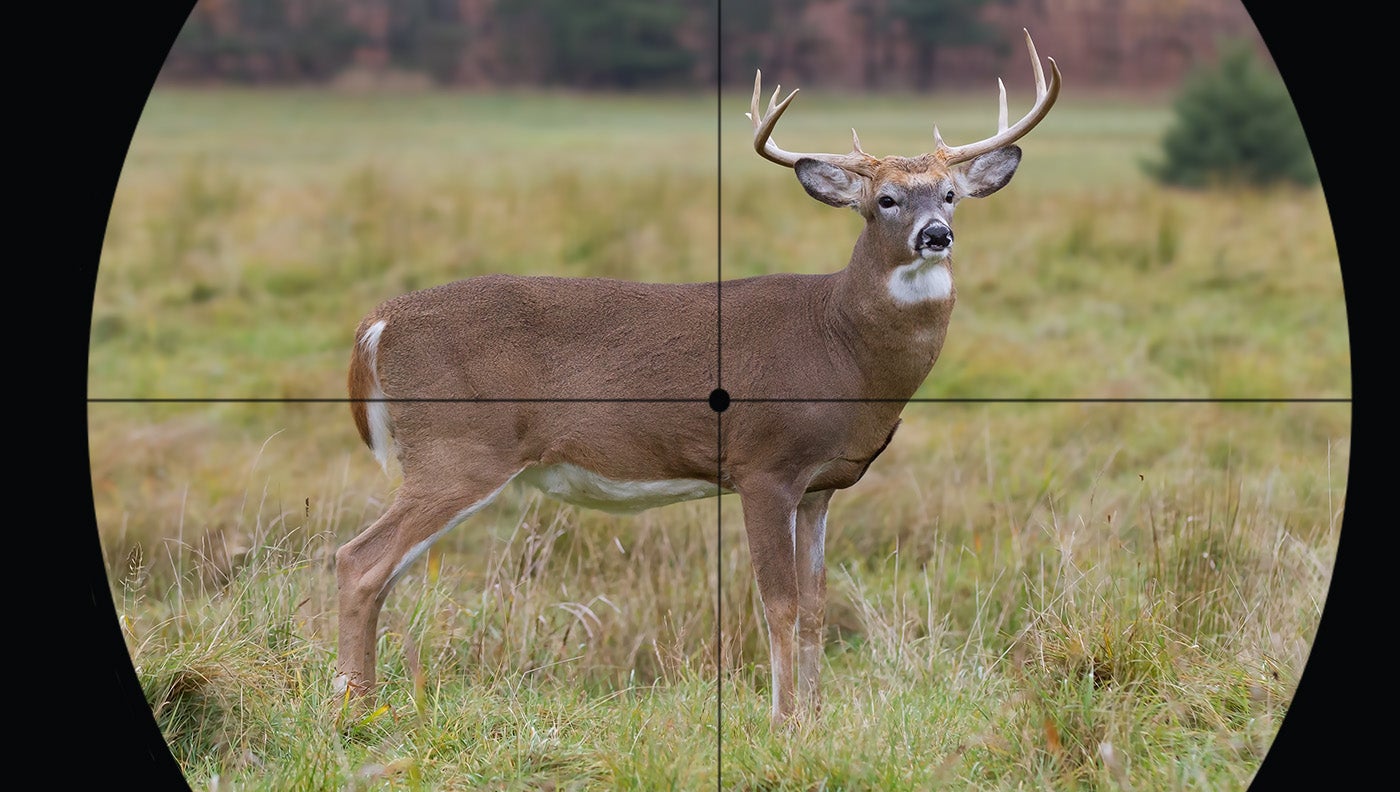 I began hunting deer more or less in the middle of the previous century and have been pretty busy at it ever since. Having watched a great many deer go down, I can tell you with reasonable certainty where to hold on them and what kind of bullets to use, but if I, or anyone else, tries to tell you that thus and such happens every time, without fail, they’re full of it.

That said, deer are not hard to kill. They’re not big, or heavy boned, or thick-hided, like elk, and they lack an elk’s fantastic will to run even when fatally shot. Nonetheless, you have to do it right.

Whatever cartridge you choose is less important than your choice of bullet and your ability to shoot said bullet accurately. I’ve killed deer with everything from a .223 to a .340 Weatherby, and everything in between, and have seen no evidence that one cartridge is more effective than another. But I’ve seen a lot of difference in the way bullets do their job.

Because of the nature of my profession, I’ve used both tough bullets and quick-expanding bullets on deer because I was required to see how everything performed, and after seeing what I’ve seen over half a century, I’m a tough-bullet guy all the way. If you’d like me to name names, here’s what I prefer: Barnes TSX all-copper, Swift Scirocco (maybe the best all-around bullet of all), Swift A-Frames, and Nosler Partitions. They get through to the vitals, they break bones if you have to break them, and they give you an exit wound and a blood trail without fail.

There’s nothing, neither cartridge or bullet, that will drop a deer in its tracks every time. Finn Aagaard summed it up best: Animals go down, he wrote, when the spine is severed, or the brain is damaged, or the brain runs out of oxygen. Period. So you can take out a buck’s heart and both lungs and it will still be able to run for 10 yards or 25 or 50 because there’s still some residual oxygen in the brain and, until that’s consumed, the hooves will obey the signals they receive from Command and Control.

That understood, here are four shots that deer hunters can rely on.

This is the true Money Shot. The lungs are a very big target, and if you wreck one or both, you’ll have yourself a deer. Put the crosshair one third to halfway up the body, just behind the foreleg, PICK A SPOT TO AIM AT, and squeeze. You’ll get at least one lung, and probably both, and you may well hit the heart as well. This is the one shot where I’m happy with a quick-expanding bullet. There’s nothing anatomical to keep it from doing its job, and of all the shots you can make, this one destroys the least usable meat. For ammo, two good options here are the Browning BXR and Winchester Deer Season.

As I said earlier, I am a tough-bullet guy, and as such, this is the shot I prefer. Bring the crosshairs one-half to two-thirds up the body and put them a bit forward of the center of the shoulder. This will get the lungs for sure, and it will very likely wreck the shoulder blade and some of the spine as well. A deer that has sustained this kind of damage can manage to run a few yards, but that’s it.

This, I think, is the most effective one of all. If a deer is facing you, aim smack in the middle of the chest and send it. The bullet will take out both lungs and the heart. I may have had a few deer run a few yards when I got this shot, but I can’t recall any. The most typical was a big Maine deer that I got at 270 yards. It simply sagged sideways and was caught by a fallen tree. It never touched ground.

If you buck is quartering toward you, aim for the point of the shoulder, which will also give you a short and easy blood-trailing job.

4. Back of the Neck Shot

I don’t like neck shots from the side or an angle and will not take them. You’re shooting at a mass of muscle that conceals some comparatively small arteries and a spinal column that is maybe the size of your thumb. If you get either one, you may pat yourself on the back. Most likely, you’ll produce a massive flesh wound that will allow the deer to escape and die in agony. In this case, feel free to kick your own ass.

However, if you find a deer that’s facing directly away, and you’re using a strong bullet, aim at the base of the neck, dead center. You’ll get the spine, which is bigger than the neck’s spinal column, and the animal will go down in its tracks.

The Shots You Should Not Take Deer

Do not take a head shot of any kind. The head is a small target, and even if the deer drops, you have a ghastly mess that disrespects the animal. Much worse, you’ll likely shoot away the lower jaw, and then the creature will live for a long time in unspeakable pain. I friend of mine, an ethical hunter, did this to an elk by accident and was unable to find the beast and end its suffering. It haunted him until his dying day.

Shooting at the root of the tail, or the Texas Brain shot, as I’ve heard it called, is sometimes recommended as a means of keeping a wounded animal from escaping. If you’re a cool and expert shot, and can hit the base of the spine, it will indeed drop the animal’s hind legs and you can finish him off. If you’re not a cool and expert shot, forget about it. You’ll hit the guts instead.

And if you don’t like the shot you have at the moment, take your finger off the trigger and wait. Deer are never still for more than a couple of seconds, and your angle will change. However, you have to be able to read whitetail body language. If the critter you’re aiming at is serene and at easy (at least as far as deer get to be like that) you can afford to watch. If the deer is looking right at you, tensed like a spring, ears forward, hoof stamping the ground, it’s time to shoot if you have a good shot or not shoot if you don’t.