The notably large outbreak has killed over 2,000 whitetails throughout the state 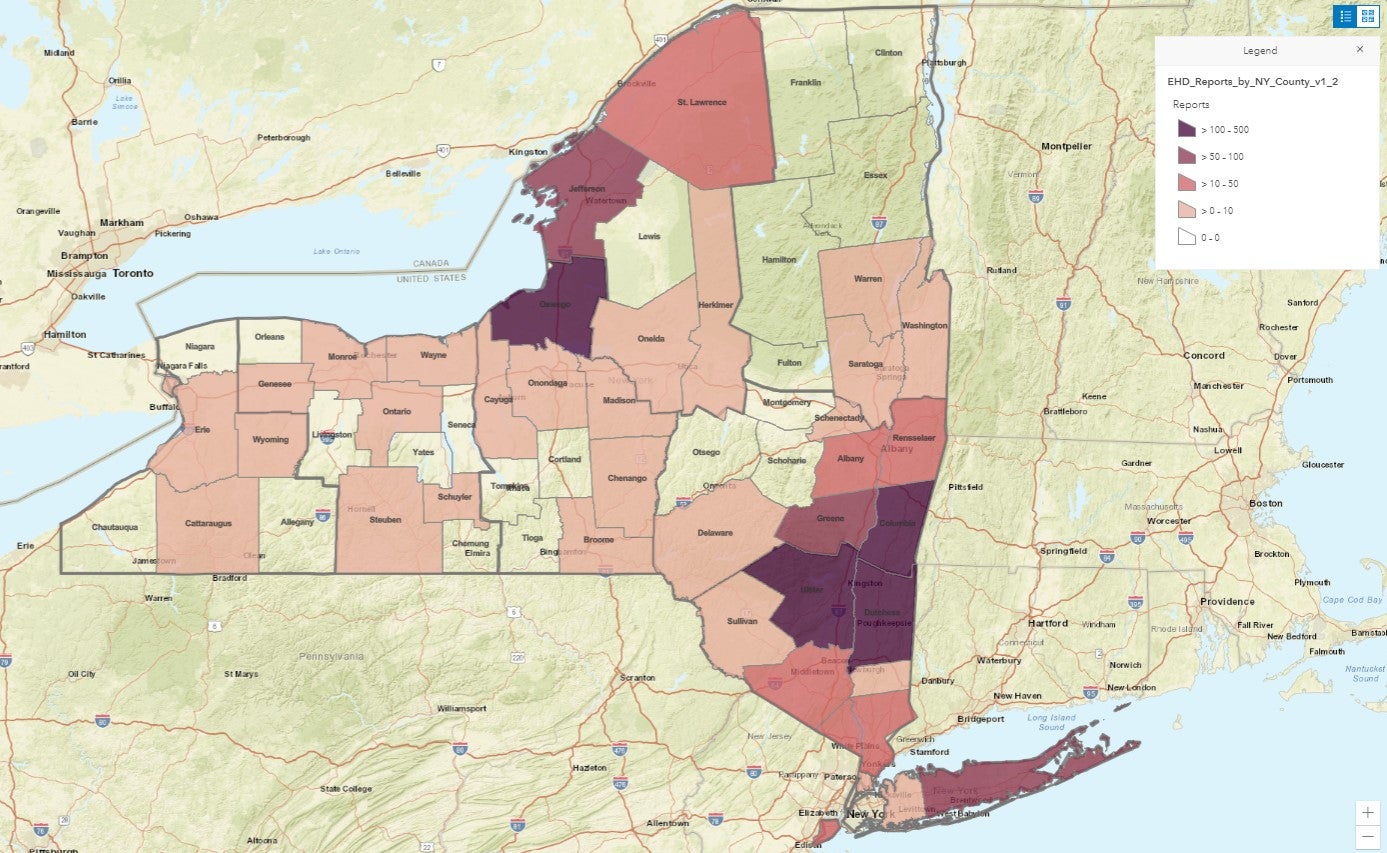 The areas of New York State where EHD-infected deer have been detected. N.Y. DEC via Facebook
SHARE

A large portion of New York state’s deer herd has been hit hard by an outbreak of Epizootic Hemorrhagic Disease this year, with 2,051 deer reported dead as of November 9, 2021. Ulster, Dutchess, Columbia, and Oswego counties have been particularly hard hit. Dutchess and Columbia have recorded 354 and 236 dead deer, respectively. Oswego county tallied 171 reported deer killed. Meanwhile, Ulster alone has reported a whopping 534 deer dead from EHD. Ulster’s deer herd was also among the most afflicted last year. In 2020, EHD was suspected of causing the deaths of more than 1,500 deer statewide.

New York’s Department of Environmental Conservation (DEC) has monitored this year’s outbreak since it began in the lower Hudson Valley in late July. More than 30 counties have reported some level of outbreak. Counties clustered along the Adirondack Mountains appear to have escaped the outbreak so far, as have about half of the counties in the western portion of the state. DEC officials can’t point to a specific known reason why the outbreak happened where it did this year, but note that the disease does not affect deer populations uniformly. Hunters may see variable impacts on hunting success depending on the specific locations they chose to hunt.

EHD is a viral disease that’s endemic in North American white-tailed deer populations. It is transmitted by biting midges, also called “no-see-ums” or “punkies.” External signs of EHD in deer include fever, small hemorrhages or bruises in the mouth and nose, and swelling of the head, neck, tongue, and lips. The hooves of infected deer often crack or slough, which makes infected animals appear lame. Deer with highly virulent strains of the virus may die within 1 to 3 days of becoming infected. Dead or dying deer are commonly found near water in late summer or early fall. The DEC examines dead deer by necropsy with tissue samples tested to confirm the disease. DEC officials also opportunistically collect carcasses and tissue samples from deer on the fringes of known EHD outbreak areas for testing.

Some deer are known to survive the disease. Studies in Virginia of deer in areas that experienced significant EHD outbreaks show overall losses to the herd are usually well below 25 percent of the total population. In a few instances, though, losses have exceeded 50 percent. Hunters can tell if a deer was an EHD survivor if two or more hooves show evidence of having been cracked or sloughed but now seem to be healing.

Several EHD virus variations, known as serotypes, can afflict deer and some livestock. Only EHDV-1 and EHDV-2 are endemic to the United States. However, in 2006, an exotic serotype labeled EHDV-6 was first detected in the United States. It steadily has gained a foothold and is the dominant strain of EHD impacting New York’s deer in both 2020 and 2021.

There is no treatment nor means of prevention for EHD. The good news is that the first hard frost usually kills the midges that transmit the virus. As of this writing, reports of dead deer are still coming in, though, and will likely continue to do so in portions of the Lower Hudson Valley, Staten Island, and Long Island until they have a hard frost, which officials say could be soon.

The DEC website notes that thorough cooking will kill the virus, but the state recommends against harvesting or eating any animal that appears sick or diseased. Reports and photos of sick or dead deer suspected of having EHD can be made using DEC’s Online EHD Reporting Form. The state wants to track the spread of the disease as thoroughly as possible and document the number of deer that die so they adjust deer management plans in the future. Depending on the final extent of this year’s outbreak, management adjustments could be coming next year, according to DEC officials.