A two-shot crossbow? Yes, and our test bow proved to be accurate, reliable, and uniquely useful in the field 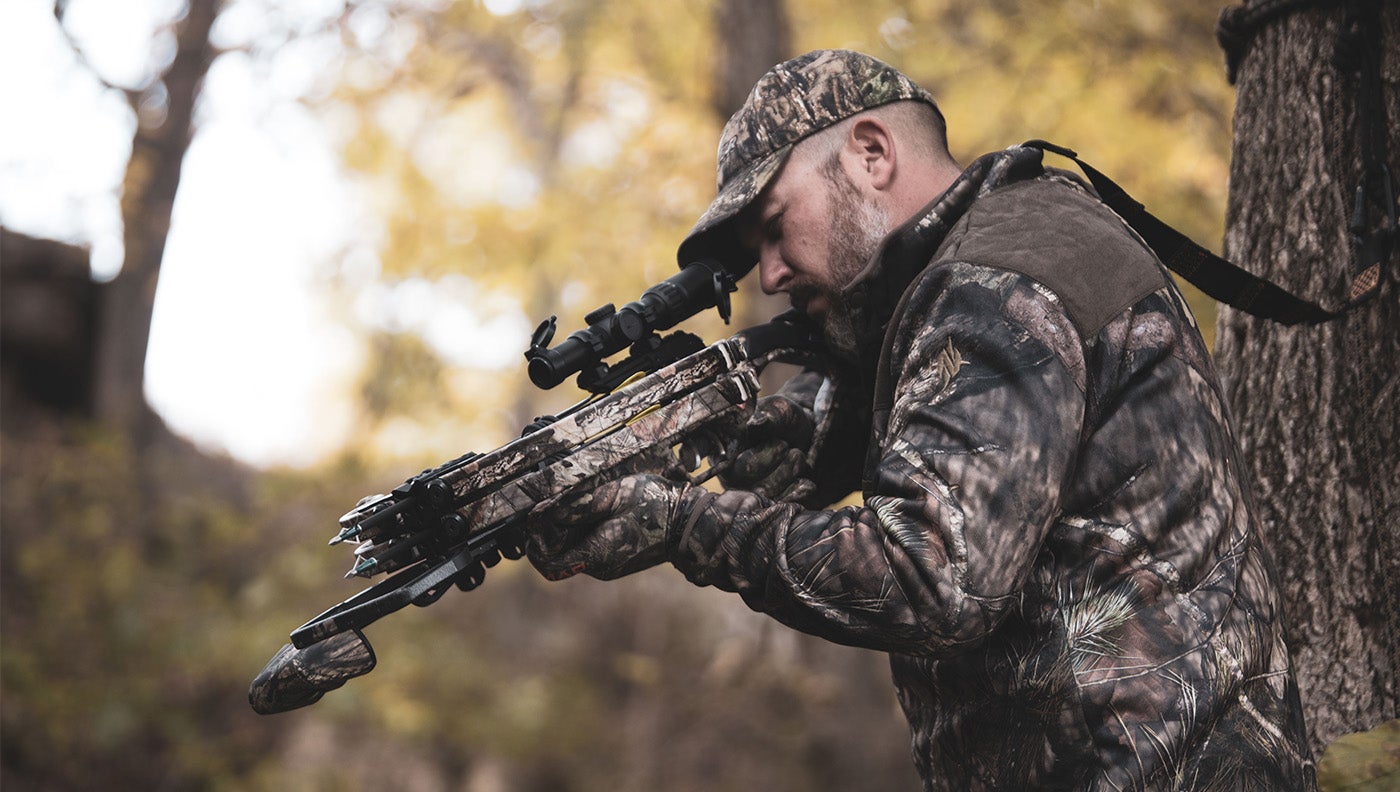 Unlike any other crossbow, the TwinStrike offers an immediate second shot, which can be a big advantage in the field. Pure Archery Group
SHARE

I remember being amazed by a 350-fps crossbow that would shoot one-hole groups at 30 yards. These days, even the budget crossbows will do that. Crossbows have come a long way in a few short years, to the point where one of the most anticipated models of 2021—the Excalibur TwinStrike—will fire two bolts, back-to-back, as fast as you can aim and pull the trigger.

Is this thing a gimmick? Better for zombies than deer? A double-barreled abomination to bow seasons everywhere? Or the most useful hunting innovation to hit the flagship crossbow market in years? I’ll get to answering all of that, but first, let’s review the state of the crossbow market, and specifically where Excalibur recurves fit in.

The Breakneck Pace of Crossbow Innovation

Buyer expectations for flagship crossbows changed around 2017 with the launch of the Ravin R15. Crossbow makers suddenly realized that some hunters were willing to spend as much on an x-bow (and sometimes more) as on a custom rifle—that is, if the bow could deliver on high-end performance promises. In the case of the Ravin, the promise was 100-yard accuracy; it delivered and it changed everything.

Since then, a handful of super-high-end models have been in a race to deliver the goods in terms of performance, innovation, and pure wow factor. Last year TenPoint debuted a 470-fps crossbow paired with a range-finding Garmin sight that, once programmed, provided automatic aiming solutions out to 200 yards. This year, Ravin hyped a 500-fps crossbow equipped with an electronic cocking device—though it seems that this model has suffered from production issues that have, to this point, kept the new bow off store shelves.

I’ve watched the competition unfold while conducting flagship crossbow reviews for Field & Stream over the past eight years. Up until now, Excalibur’s recurve models have not quite run with the very-top dogs. That’s partly because our test is tough on recurves. Because they rely purely on limb flex to generate power, these crossbows are more difficult to cock and are both bulkier and louder. They all shoot lightweight bolts (around 350 grains, finished), making them comparatively anemic on the power front.

Still, test results don’t always tell the full story when it comes to their usefulness as hunting tools. I’ve seen about every type of malfunction you can imagine from a crossbow, but few from an Excalibur recurve. I’ve hunted with them extensively, and they are dead-nuts reliable and well-built. Even if they do give up some performance, their simple, utilitarian design has real in-the-field advantages.

How Does the Excalibur TwinStrike Work?

Ironically, it’s that simple design that makes the TwinStrike possible. It’s been called a repeater, but that’s not technically correct. The TwinStrike is really two compact crossbows built onto a single frame. There are two sets of limbs, two strings, two barrels, two triggers, and two sears. Each must be cocked and fired individually. The only parts that the two bows share—that I can see anyway—are the stock, safety, and scope. It’s ingenious in a simple, “Why didn’t I think of that?” sort of way. I’m no engineer, but I can’t see how a two-shot compound crossbow could be built within the confines of a practical hunting package. It’s the Excalibur’s recurve design that makes this possible.

The TwinStrike’s limbs are short, narrow, and thick—reminiscent of the company’s compact Micro series of crossbows. The stock, also like the Micro series, is skeletonized for weight reduction. While the TwinStrike doesn’t have the bulky profile of the full-sized Assassin series, it is nonetheless a big crossbow. Completely rigged with accessories, including a quiver full of arrows and the Charger EXT cocking device, my test model weighed in at 11 pounds, 12 ounces. You can, of course, shed the quiver, and the cocking device is meant to be removed. That done, weight is down to 9 pounds, 10 ounces. But that’s still pretty heavy.

How Well Does the Excalibur TwinStrike Perform?

In my tests, the TwinStrike performed exactly as advertised—and even a little better. I approached parts of the test as if shooting two different crossbows. The top barrel of my test model averaged 360.5 fps through my chronograph, and it had a 4-pound, 11-ounce trigger pull that was crisp and broke like glass. The bottom barrel was better, though, averaging 364.5 fps, and with a trigger that was more than a pound lighter at 3 pounds, 2 ounces.

The bow comes with a 30mm OverWatch scope that has an illuminated reticle that’s graduated for yardages out to 100. I sighted it in at 30 yards initially (second circle in the scope), dialed in the magnification ring to match the velocity, and then fine-tuned my zero at 20 and 40 yards. At each range, the bottom arrow hit less than 2 inches below the top arrow, which is what Excalibur says it should do. Bottomline, you can aim at a buck’s heart and hit it with either barrel. As for each barrel’s accuracy, the top one shot 7/8-inch groups and the bottom shot 1-inch group at 30 yards.

One complaint I have about some flagship crossbows is that they cannot be physically cocked without using a built-in crank-style cocking device. Those devices have proven to be reliable. Still, in the woods, stuff breaks.

The Charger EXT device included with the TwinStrike certainly makes cocking the bow easy (down to about 12 pounds of effort). It’s a smooth system, but it also detaches. For giggles, I also hooked up a standard rope-cocking aid to the TwinStrike, and I was able to cock it just fine. It takes a pretty good yank and a grunt to do it, but I love the idea of having a back-up method for cocking the bow. The TwinStrike can be de-cocked without firing, too, with the use of an included de-cocking tool and the Charger EXT.

What Are the Downsides of the Excalibur TwinStrike?

As mentioned, the TwinStrike is a bit on the heavy side. Also, loading the barrels needs to be done in the correct sequence, for safety reasons. The TwinStrike does have CeaseFire Technology, which is an anti-dry-fire device that prevents the bow from firing unless an arrow is in place, safety off, and the trigger pulled. That’s pretty standard.

But, again, the TwinStrike is really two crossbows, and they share a safety mechanism. After you get one barrel cocked, the safety has to remain off to cock the other barrel. The correct procedure goes: cock the top barrel, then the bottom. Then engage the safety. Next, load an arrow in the bottom barrel, followed by the top. It’s not complicated, but if you do something out of order or forget a step—like engaging the safety—you could end up with your hand over the top of a broadhead-tipped arrow in a loaded crossbow. Even if you avoid that, without following those steps precisely, it’s difficult to continue loading the bow without getting your fingers in between a rail and string at some point.

Maybe you’re a crossbow veteran and think you’re immune to rookie mistakes. But just the other day my buddy Hugh, who’s been hunting with crossbows for 20 years and sells them in his sporting goods store, cut off two of his fingers while shooting at a bull elk. Mistakes happen in the heat of the moment. For that reason, I think a three-position safety for independent use of both barrels would be a good upgrade for the next generation TwinStrike.

What Are the Biggest Advantages of the Excalibur TwinStrike?

What sets the TwinStrike apart, of course, is it’s second shot. And from a practical hunting standpoint, it’s a big deal.

Like other Excaliburs, the TwinStrike shoots short, lightweight arrows (it’s designed for use with 16.5-inch Rhino Nock bolts that have an updated nock design, compared to older-style Excalibur arrows). Including a 100-grain field point, the bolts weigh 352 grains, generating about 100 foot-pounds of kinetic energy. Crushing power is a big selling point with crossbows, and this one doesn’t have it. Numerous compound x-bows that are more compact will shoot harder and flatter.

But, having actually killed a lot of stuff with crossbows, I can tell you that they will all blow through the shoulders of a moose or anything else at 40 yards. And they will all group at 100 yards from a good rest, if your scope is dialed in accordingly with your rangefinder. Inside 50 yards, where you should be limiting your field shots anyway, the TwinStrike’s ability to shoot a quick second shot easily makes up for the speed advantage of its competitors.

The TwinStrike costs about $2,000, which sure isn’t cheap but is still less than some of the competition. As flagship crossbows go, it’s actually one of the best bargains out there right now. Maybe the best.

Would it be a good fit for a zombie movie? Oh, hell yeah. Is it an abomination to bow season? Absolutely, but no more so than any of the other over-the-top crossbows on the market. I’m not much into long-range shooting at anything, with anything. But give me a second shot for when the first doesn’t go as planned—or better yet, for when that second deer or hog is just standing there looking confused—and I’ll take it every time.