A couple days on a quail plantation bring back old memories, and inspire plans for a future family hunting adventure 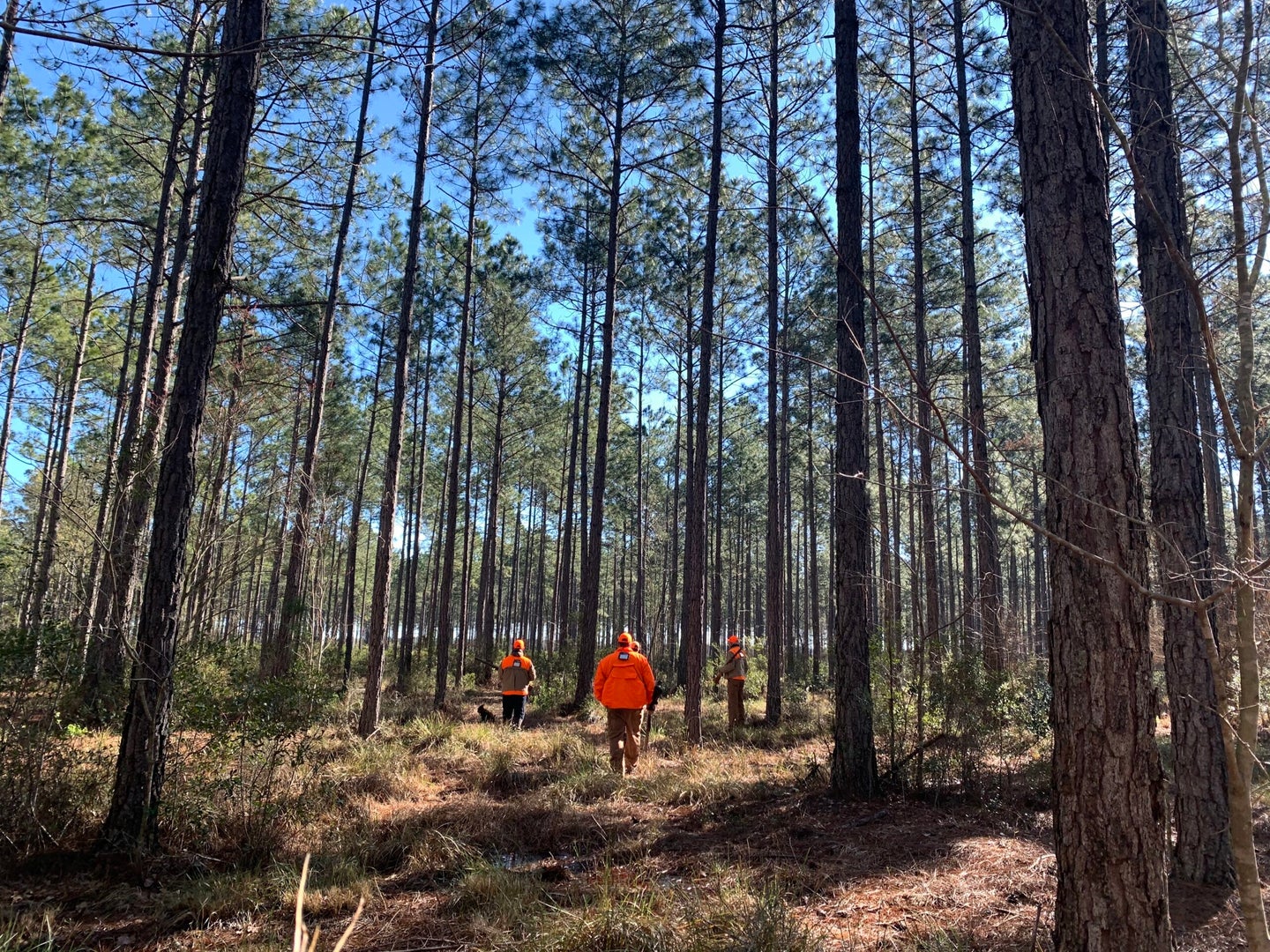 A chorus of barks and howls from the kennels greeted us as we pulled into Branhill Plantation in Georgia. The last hunting trip my dad took me on was for my 17th birthday where we hunted whitetails in Canada. That was nine years ago. As my dad and I unpacked and laid out our hunting gear for two days of quail hunting, I see that he brought my old Carhartt overalls and jacket from South Jersey, along with my hunting vest. All I had to bring from my home in Florida were my boots. Then he told me he brought something else.

He reached into his bag and pulled out an object in a closed fist. He turned his arm over and opened his hand, revealing a light blue Swiss Army folder—my first hunting knife. He found it in a slew of gear in the basement and, seeing as how this trip was meant to be a reunion hunt for us after all these years, he wanted me to have it again. Holding the knife triggered old memories.

I am standing on my toes at the kitchen counter as Dad shows me each tool: the scissors, nail file, knife, and, my favorite, tweezers. I feel like an official hunter—self-sufficient, and one with my own equipment. My dad was, and is, a natural outdoorsman, and I took every opportunity to be just a little more like him.

After we finished unpacking, we joined the others downstairs for dinner. Our crew consisted of my dad and me, plus Davey Nuss and Randy Weaver, two longtime family friends. There were other guests, too, but I was the only female and the only one who had never shot a quail. I enjoyed listening to the hunters tell stories of past hunts around the dinner table—especially my dad’s stories. His greatest skill is telling stories—the infliction in his voice, the details he chooses to highlight, the attention he grabs—and as I listened to him, I couldn’t help but anticipate the stories he would one day tell about the hunt we were about to share together.

The next morning, the temperature was just 35 degrees when our guide pulled up in the buggy with nine dogs in their crates. My dad was there for my first rabbit, turkey, and deer. Today, I told him, he’ll witness my first quail.

I remember a similarly freezing morning at Shore Winds Hunting Farm. Ice had formed over the water banks in the field. I was too young even for a youth license, but I’d still come along with my dad, carrying a shotgun-size stick that I’d use to pretend-shoot birds. My dad kicks up a quail, shoots, and the bird falls past the frozen water. Jake, my German Shorthaired Pointer, sprints after the quail, crashing through a frozen bank and swimming to the other side. He comes back the same way he went out, this time with the bird in his mouth.

The intense sunshine broke through the tall, lined pine trees, and a blanket of brown needles covered the ground. I packed my vest with shells, loaded my gun. We walked in a line with me next to my dad. At first, I was too nervous to shoot—the chaos of three dogs running around and multiple quail flying in different directions got my heart racing, and I had trouble focusing on one bird. “That’s why we have a whole case of shells,” my dad told me. “Just start shooting.”

So I did. And I shot—and missed—a lot before I actually hit a bird. But when I did, it was picture perfect: The Cocker Spaniel flushed the quail, and the bird flew on a 45-degree angle up and to the left, crossing my shooting lane just in time for me to catch it on the bead, take a breath, and bang! The quail’s feathers puffed in the air. I turned and looked at my dad, smiling. “Nice shot, H-y!” he said.

The dog chased the bird down, then ran back to the guide, head high, the quail in her mouth. The guide scratched the dog’s head, grabbed the bird from the her mouth, and stuff the quail into his vest’s.

Dad used to let me carry some of the birds in my vest, and I recall the deep connection I felt to him in those moments. I felt the warmth from the birds’ small bodies on my back, appreciating their lives and the meals they’d provide, and I remember feeling grateful that my dad trusted me to keep the birds “safe.” The hunt continued, and I remember listening to the banter between Davey and my dad, the rustling of the leaves in between conversations, the dogs’ constant running.

I felt more confident on day two of the hunt. I had about 10 birds under my belt from the day before, so I knew what to expect. We started the chilly morning at the field we ended on the day before, and our spirits were high. Except…everyone was off. We all whiffed on what should’ve been textbook shots. Even Davey, arguably the best shot in our group, kept missing. All we could do was laugh. We had a great time.

I don’t know the next time my dad and I will hunt, but as we sipped drinks around the campfire on the last night, we were already discussing ideas for future hunting trips. (I planted the idea in my dad’s head that I’d love to hunt mule deer in Wyoming.) The next day, Randy, Davey, and my dad dropped me off at my apartment in Tampa before they left for the airport to fly home. Before getting out of the car, I checked a small pouch in my backpack. There, safely inside, was my knife. I tell myself that I won’t go anywhere without it.