Even if your foot plots are coming nicely, you're not done yet. Follow these four simple tips for turning good plots into perfect plots before the season starts 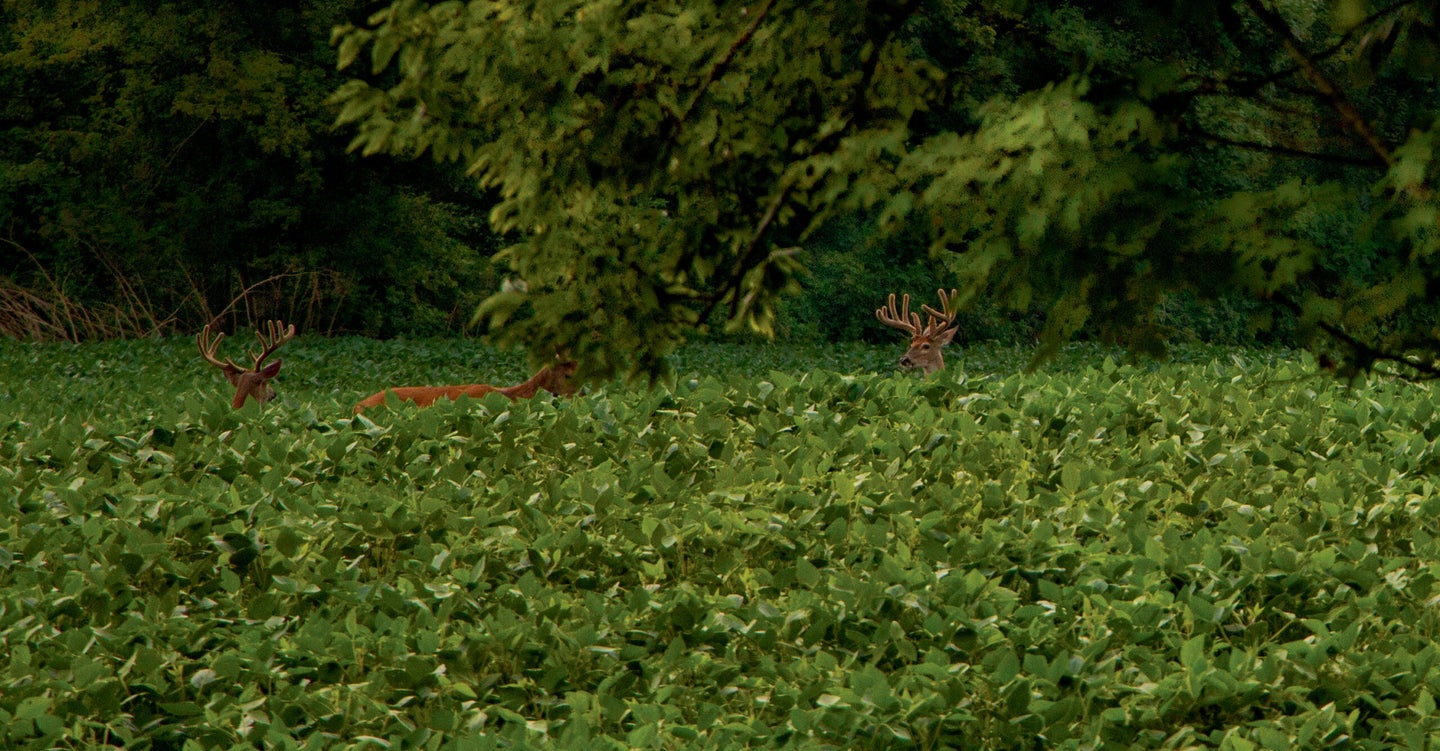 The clock is ticking on the preseason, and to be honest, I’ll be glad to be done with food plotting for another year. But before I quit farming and get serious about the upcoming archery season, I’ve got just a little more work to do. And you probably do too. Here are four simple tweaks you can make right now to turn a good food plot into a great one before the season starts. You’ll see and probably shoot more buck as a result.

Nothing heats up a food plot—especially a smaller kill plot—faster and more effectively than adding a mock scrape or two. Obviously bucks visit food plots to eat, just like other deer, but a mock scrape adds another level of attraction; in addition to filling his belly, a buck can check out the local competition and strut his own stuff by leaving his scent and sign at the scrape.

Making a mock scrape is pretty simple. Just find a tree with a limb growing 5 to 6 feet off the ground, hanging into the plot or just off the edge. Then, on the ground right below the branch, scrape away any vegetation, sticks or other debris to expose a 2- to 3-foot circle of dirt. If you have a choice, an aromatic, soft-barked species like pine, cedar, popple, or birch (to name a few) are best; bucks also like to rub on scraping trees and these are some of their favorites.

At this point you can walk away and odds are area bucks will start hitting the scrape. But if you want to spice things up further, zip-tie a chunk of rope to the overhanging limb and add some scent to the rope. The rope holds scent longer than any branch, and bucks will lick and chew on it to leave their own calling cards. The zip-tie is important, as it fastens the rope securely to the limb; without it bucks will pull the rope off.

2. Give Bucks a Place to Rub Their Antlers

Bucks have a maddening habit of entering a food plot, eating like cows for many minutes, then exiting without offering a shot. To combat this, and to add another layer of attraction to your plot, plant a rubbing pole within bow range of your stand. I’ve done this by simply cutting down a young cedar or pine (preferred rubbing species in my area), then digging a foot-deep hole and “planting” the tree in the hole. Ideally, the tree will have some limbs that will make ideal licking branches for a mock scrape, but this isn’t critical. What you want is a tree that a buck will visit to rub after filling his belly.

If you don’t want to bother with cutting down a tree and digging a hole, there are several commercial products that also work. One I’ve used is the Buck Stick , a slim, flexible, fiberglass rod that you simply push into the ground with the toe of your boot. At the top of the Buck Stick is a clump of artificial leaves, as well as a handful of slim hemp ropes that can be used for scent application. Bucks visit to sniff the ropes and work their racks in the leaves, and while they don’t always rub the fiberglass pole, they do push it around with their antlers. In addition to being a lot less work than planting a rubbing pole, the Buck Stick can be removed at the end of your hunt and placed at your next stand setup.

3. Make Amends for Not Amending the Soil Earlier

I’ll confess that I can be pretty lazy about prepping plots with lime and fertilizer. In my haste to get seed in the ground, I often forego soil amendments that would make my hastily planted plots perform far better than they do. I’m honestly going to be better….next year.

Fortunately, there’s help for people like me, in the form of amendments that can be added even after your plot is planted. In fact, I just applied Whitetail Institute’s Impact, a fast-acting liquid designed to improve soil pH and plant growth. Impact is a powder that I mixed with water and applied with an ATV sprayer to three plots, all surrounded by timber and known to have acidic soil. While not a long-term substitute for lime, Impact is supposed to boost pH for the next several months.

If fertilizing is another step you’ve skipped (yeah, me too), it’s certainly possible to fertilize an existing plot. I’ve done this several times, using a hand-crank broadcast spreader packed with fertilizer. Some cautionary notes here. First, try to time your fertilizing session just prior to a rain, which not only helps the product dissolve and act quickly, but should prevent fertilizer from “burning” plants that are dry and struggling. Second, if you use a hand spreader, wash it out thoroughly with water when you’re done. I spent an afternoon applying fertilizer with my spreader a few years back, and the next morning I was unable to budge the crank. Apparently residue from the fertilizer had coated the metal gears and locked things up; I had to take a knife and scrape off the residue before I could return to work.

4. Give Plots a Second Shot of Seed

I’ve planted my share of food plots over the years, and almost none of them has turned out perfectly. A disc digs too deep, a seeder gets a hiccup, a drag sweeps seed to the side. As a result, almost every plot will have holes in it. And while this is certainly no reason for anguish or concern, bare spots can be growing deer food, rather than weeds, with just a little extra work.

Now is the perfect time to fill in bare spots by simply taking a broadcast spreader and direct-seeding those gaps. Clover plots are a perfect candidate for this, as mowing or spraying weeds during the summer often leaves holes in an otherwise pure stand. And seeding these spots in with clover, which, though it won’t immediately catch up to the established plants, will at least get rooted and have a great start for next year. If you’re out of clover seed, substitute with winter rye which, in addition to being cheap, grows quickly, eliminates weed competition, and is adored by deer. Next spring’s mowing will eliminate this annual, which can be replaced by clover.

In annual plots, like brassicas, simply revisit and hit the gaps with more brassica seed. Lacking that, rye is (once again) my go-to for food plot remedies. It establishes like no other seed I know; I’ve planted rye by simply broadcasting it on to bare soil and walking away. Of course you’ll get better germination if you work it in a bit (a steel garden rake is perfect for scratching up dirt in a food plot gap), but I almost always get decent germination on bare dirt, especially if I seed just preceding a rain.

Finally, don’t neglect beefing up a row-crop plot—especially soybeans—by planting rye or brassicas between the rows. This is the perfect time of year to do this, as bean leaves are starting to yellow and will soon fall. Those falling leaves will cover the seed, creating the perfect bio-matter to encourage germination. Now you’ve taken a bean plot and added a green food source, effectively creating a doubly attractive food plot.