The deer, which was taken in Georgia, showed signs of a rare birth defect that causes abnormal antler growth in whitetail bucks 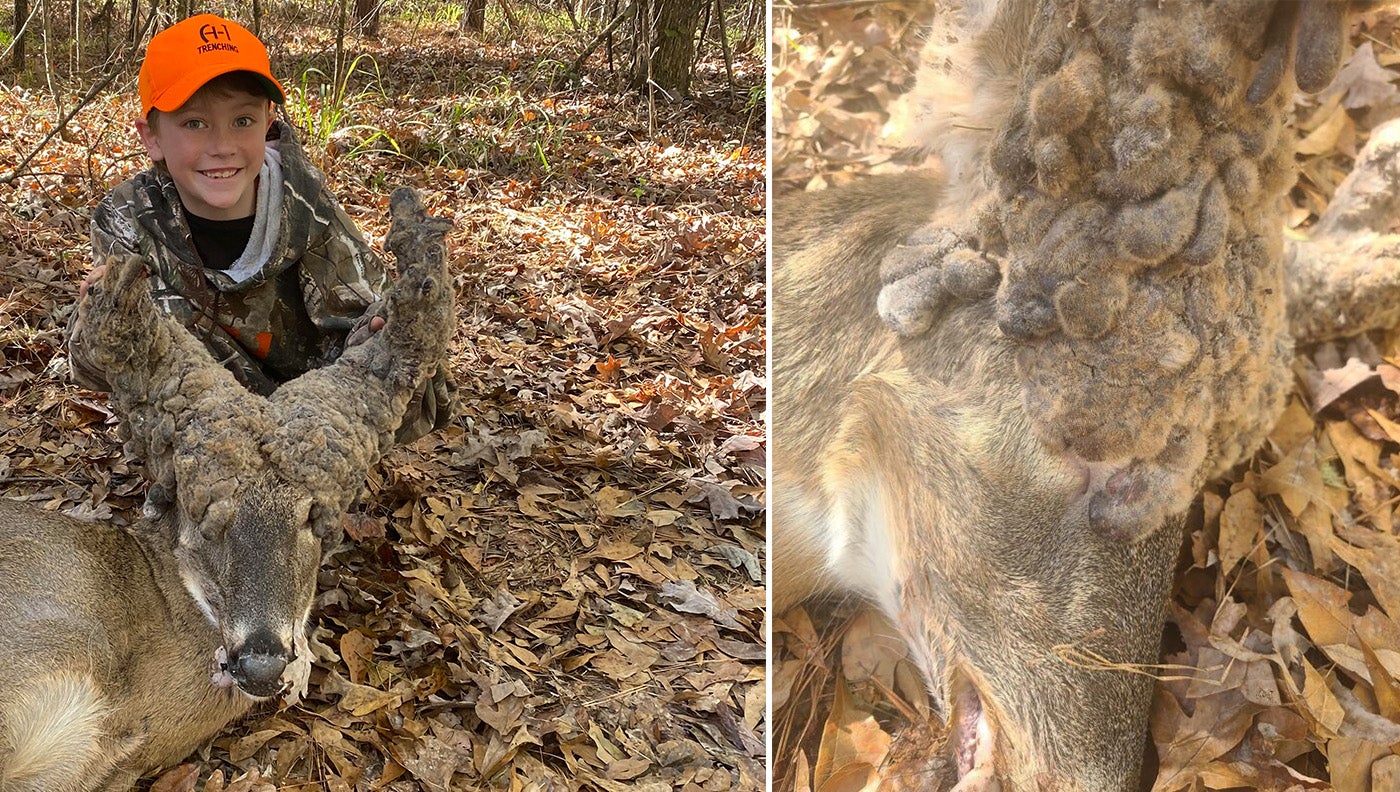 The buck was feeding in a food plot when Beau Pruitt shot it from a box blind on November 3. Justin Pruitt
SHARE

An eight-year-old hunter in north Georgia killed an extremely rare deer early last month while hunting over a food plot on his grandfather’s property. The Georgia buck’s rack was massive but not in the traditional sense. Instead of tines, it sported a bizarre outgrowth of permanent velvet that completely engulfed both of its main beams and even spread down over the animal’s face.

Beau Pruitt, the young hunter who shot the deer, had been chasing it since the start of Georgia’s youth rifle season when he finally made the fatal shot from a box blind on November 3. But his dad, Justin Pruitt, said he’d been watching it for several years.

Related: 8 of the Strangest Deer Ever Taken by Hunters

“He wasn’t nearly as big at first, and he still had some regular shape to his antlers,” Justin later told Georgia Outdoors News. “You could actually see a few points in his antlers in the first few years. But this year the antlers became so large that [they] covered his eyes.”

Photos of Beau’s deer show a rack that resembles a giant set of horns, with knobs of hardened velvet completely concealing any normal antler growth that might be hidden beneath. According to a Georgia-based deer biologist, it’s the result of a rare birth defect called cryptorchids.

The condition is typically caused when the testicles fail to descend and never fully develop, which throws testosterone levels completely out of whack. Because testosterone cycles govern antler development, male deer with cryptorchids tend to grow wild-looking racks that never fully come to fruition. And they don’t shed their velvet the way a typical buck will each autumn.

According to the National Deer Association, bucks with cyptorchidism—also known as cactus bucks—don’t participate in normal rutting behavior. They don’t make rubs or scrapes, and their necks don’t swell up the way a typical buck’s will during the fall mating season. They can’t reproduce, and they never shed their antlers. Instead, they accumulate antler growth year after year, which explains the impressive mass that Pruitt’s deer had developed by the time he harvested it.

Justin Pruitt said the deer was his son’s first buck, and he plans to have it shoulder mounted by a local taxidermist. “The shot was a little far back, so we backed out and found him the next day,” Pruitt told F&S. “Beau was super excited when we walked up on it. He says he’s going to hang the mount next to his football, baseball, and basketball trophies.”