Adam Cummings is ecstatic when he sees 150-inch buck on his place. Last November, he tagged a main-frame 6x6 that grossed nearly 200 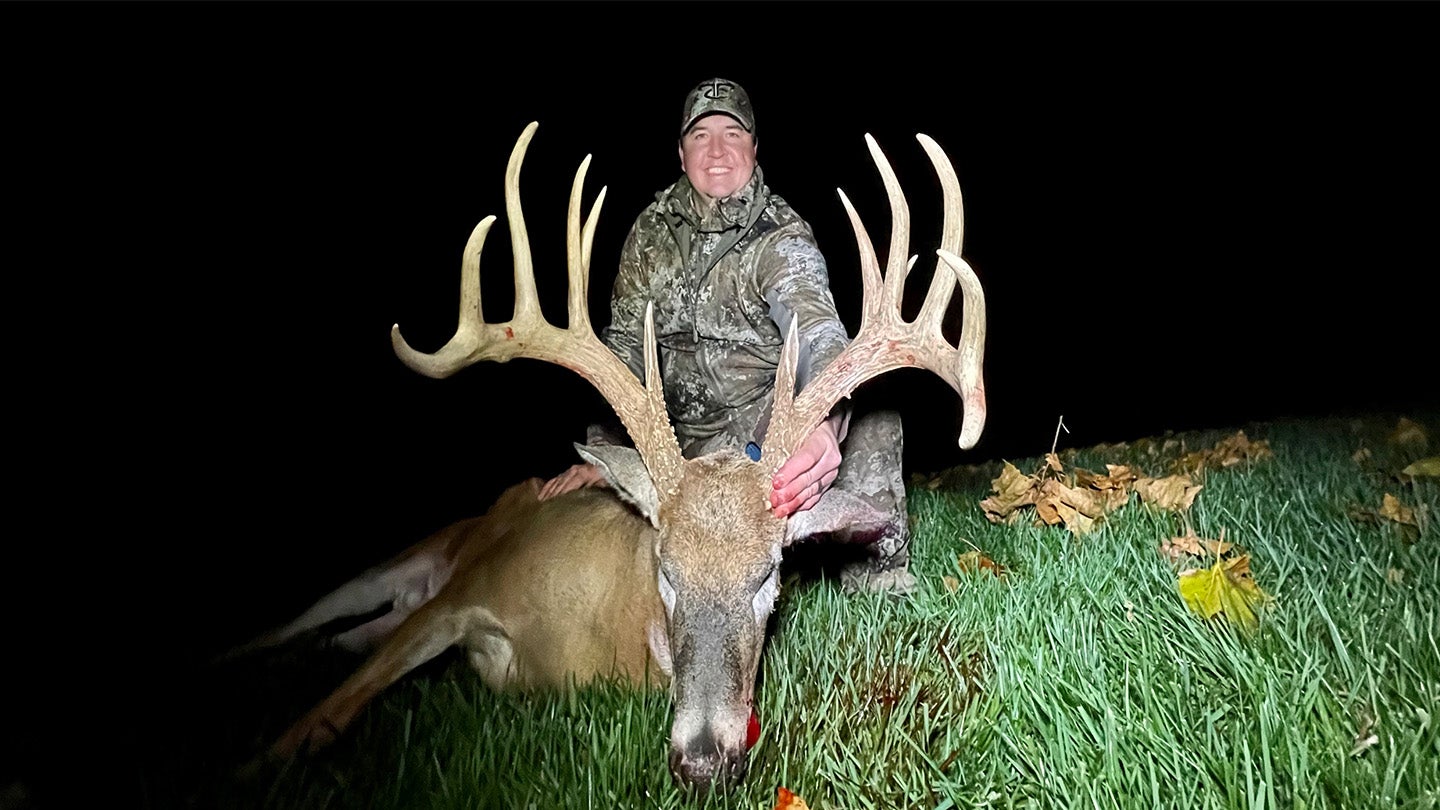 Adam Cummings is a dedicated and passionate bowhunter in a great part of the country for deer hunting, but he never expected to see a near-200-inch whitetail on his home hunting grounds. “I hunt a 300-acre farm in central Missouri, and while there are always nice deer around, if you kill a 150-inch buck you’ve done something pretty special,” he tells F&S. “Our area doesn’t produce giants like the ones you see coming from Iowa and Kansas.”

He was more than a little surprised then when he pulled that first trail-cam pic of the buck back in October. “It was an absolute giant Missouri whitetail,” he says. “As the days went on, I got a few more pics, all in the middle of the night. Toward the end of the month, he started moving earlier, but still after shooting hours ended. I kept hunting carefully, wanting to be in the stand, but not bust him out of there.”

Finally on November 1, the buck daylighted, and Cummings was there to see it in person. “I happened to be in a tree stand set up on a cut corn field when the buck walked out of the timber. Even at 120 yards, he looked huge. I’ll never forget the image of all that bone on his head as he walked away from me, then turned back into the woods at 300 yards.”

Two days later, on November 3, Cummings took another swing at the giant. “I sat in a different stand, this time in the northwest corner of the same field,” he says. “He’d walked by this same area when I’d seen him earlier. At 5:30 pm, he came out again, using the same haul road to enter the field, but this time he was 100 yards east of me.” The buck chased a few does around the field, but never worked into bow range, so Cummings stayed in the stand until after dark so he wouldn’t spook him, then snuck out.

Dialing In The Perfect Stand Location

Knowing the rut was building in intensity, Cummings called his friend, John Paul “J.P.” Morris, to discuss strategy. “We talked it over, and decided I needed to get aggressive,” Cummings recalls. “The next day, November 4, I walked in early with a hang-on stand, which I hung on the haul road that I’d seen him use to enter the field. I sat that night and didn’t see him but had a great hunt. I felt like I was in the right spot.”

Cummings’ gut feeling proved true the next afternoon. “The wind was perfect for the stand. My DeerCast app said the conditions were ‘Great,’ and I just had a feeling that something special was going to happen,” he says. “I got in there about 2:00 pm and did not see a deer for three hours. But at 5 o’clock, they started pouring out of the timber and into the cut corn. As soon as I saw the first one, I just grabbed my bow and held on.”

Cumming kept his bow in his hand for almost an hour straight, and at 5:50, he looked in the opposite direction of where he expected to see the buck, and there he was, standing 40 yards away on the haul road. “Once I knew it was him, I never looked at his antlers again. Amazingly he walked right down the road toward me, and there was some cover between us.” Cummings drew his bow while the buck walked perfectly broadside at 17 yards. “I managed to make a perfect double-lung shot, and he tore off but only made it about 90 yards before he tipped over. I was shaking so badly I couldn’t stop, but I finally gathered myself and was able to call my wife and my buddies. I was actually FaceTiming them as I walked up to the buck. When I saw his right side I said ‘Ohmigosh I just killed a Booner!’”

A Buck for the Record Books

Cummings didn’t realize it at the time, but his buck would make B&C with many inches to spare. “Rick Lowry Taxidermy is mounting the buck, and we did a green score there that was higher than I even dreamed,” he says. “When I had him officially scored in January, he grossed 197-6/8 and netted 195 as a non-typical. He’s big enough to qualify for four record books: P&Y, B&C, Missouri Big Bucks, and Missouri Archery Big Bucks, and he’ll be entered in all of them.”

The Show-Me State giant sported 13 scorable points, a 21-inch inside spread, and over 40 inches of mass measurements. “It’s a buck of a lifetime for me,” he says. “And I have to thank J.P. Morris and Nick Shepperd for all their help, and of course my wife Jayme for understanding my passion for bowhunting whitetails. She lets me spend hours in a tree stand every fall, and this year it paid off with a buck I’d never even dreamed of seeing, much less taking.”